I needed to use my sourdough starter Tuesday night (or else throw it out), so I whipped up this BBQ Tempeh Pizza: 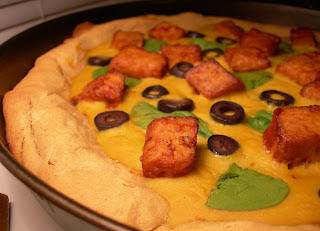 I'd marinated some tempeh in a mixture with soy sauce, barbecue sauce, vegan Worchestershire sauce, and probably some other spices I can't remember right now. Then, I pan-fried it in a little more olive oil and coated with more BBQ sauce. The "cheese" is just a basic nutritional yeast cheese sauce. Then there's black olives and baby spinach.

The crust is made from starter, whole wheat pastry flour, olive oil, and salt. Unfortunately, since the starter is fed with sugar each week, the crust was a little too sweet for a pizza. I mean, it was okay. I definately ate the whole pie (not all at once! I just finished the leftovers tonight). That starter, which is commonly known as Friendship Starter because it's passed down from friend to friend (or in my case from my grandma to my mom to me), is better used in sweets like cinnamon rolls.

I'm going out of town this weekend, by the way. So I doubt I'll be blogging tomorrow since I'm leaving after work. And I won't be back until Sunday. I'm going to visit my boyfriend in Nashville. We're going to Mellow Mushroom and I'm so excited! We don't have one here and I've heard they have tempeh and tofu as pizza toppings. I'll let you know how that turns out.

For now, I leave you with this. It's a stolen survey from Chocolate Covered Vegan's blog:

1. What were you doing 10 years ago?
I was a few month shy of graduating from high school in Jonesboro, Arkansas. I was probably spending all my time with my best friend Sheridan, making home movies of ourselves moshing to Beastie Boys songs. Or memorizing all the words on Green Day's "Dookie" album.

3. Favorite things to do?

Cooking!
Blogging about cooking!
Working on my cookbook
Playing with my 4 kitties and my puppy-dog

4. What would you do if you were a millionaire?

I would go tio culinary school and open a fancy vegan restaurant, start a vegan magazine, give some to PETA, buy a hybrid car, and move somewhere really cool where they have lots of vegan options.
Posted by Bianca at 8:20 PM

Hope you have fun in Nashville. I'd never heard of the Mellow Mushroom, but the name made me laugh.

P.S. Do you know how to add a Google Analytics or Sitemeter account? (If not, let me know.) Once you have on of those accounts, you can look at the searches people use to find your blog :o). I bet you'd get some pretty funny ones!

Hello, fellow Memphian! I just came across your blog, and we appear to share an intense love of deep dish pizza, judging by the fact that it looks like you baked that sucker in an actual pie dish. Looks yummy!

Have a good time in Nashvegas!

That's such a great idea for a pizza!

Later, go to the "Add a page element" section of your blog (the one you went to when you added the rescue pet link) and choose to add html. Copy the code given to you from Google Analytics into the html code and save.

Now when you go to the Google Analytics page, sign in with your google account info, click on "traffic sources" in the grey box on the left, and then click on search engines in the middle of the screen. It takes a day to get your info, so you'll have to wait a day ater signing up before you can see any searches.

Don't hesitate to ask for clarification if my directions are confusing!!!

Wow - I was thinking about tempeh after work yesterday after seeing a sign for "Chicken A La King" on biscuits, and how I will veganize that dish, - and now this tempeh pizza! Looks fantastic, beautiful, too. Have a great break!

I am the sort of guy who passions to seek brand-new things. Currently I'm fabricating my private pv panels. I'm doing it all by myself without the help of my staff. I'm using the internet as the only way to acheive this. I saw a truly awesome site that explains how to build photovoltaic panels and so on. The web site explains all the steps involved in solar panel construction.

I'm not sure bout how precise the information given there is. If some people over here who had experience with these things can have a peak and give your feedback in the thread it will be great and I would really value it, cauze I extremely enjoy solar panel construction.

Thanks for reading this. U people rock.