For the past couple days, I've been having whole wheat biscuits with sausage soymilk gravy for breakfast. 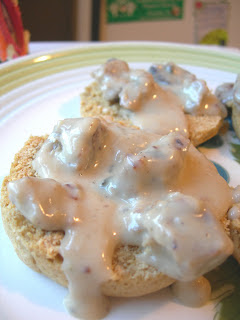 Now, you may be asking yourself, "How does Bianca have the time to make a fancy breakfast like that before work each morning?" And even if you weren't, I'm going to tell you anyway. Each Sunday night, I whip up a big batch of something that can be easily heated up throughout the week for a quick but satisfying breakfast.

In this case, I made a batch of Butter-Soymilk Biscuits (one of my cookbook recipes), but I substituted whole wheat pastry flour in the recipe for the first time and I was pretty impressed. Other than being a little bit more brown in color, they tasted the same as the all-purpose flour biscuits. I kept a few out for the next couple days and froze the rest. I'll thaw them as needed, so they don't get all gross and crumbly.

For the gravy, I made a large pot of soymilk gravy (just soymilk, whole wheat pasty flour, and some spices) with bits of cooked Light Life Gimme Lean vegan sausage crumbled into it. Though gravy tends to thicken when refrigerated, I've been taking a small amount out each morning and mixing it with a little extra soymilk before microwaving it. The extra soymilk brings it back to life. The result is a re-heated breakfast that tastes as fresh as the day it was made.
Posted by Bianca at 10:24 PM

I just had biscuits & gravy as well! Great minds.