Tonight, I prepared the Hot Glazed Tempeh from the Veganomicon. 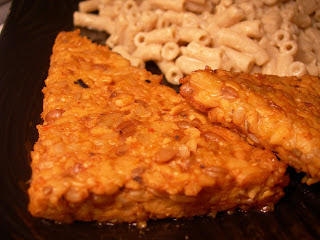 The tempeh soaks in a marinade of wine, hot sauce, soy sauce, oil, and cumin. I didn't have any wine handy, so I substituted cooking sherry. Since that's a little salty compared to regular wine, the dish was a little saltier than I expected...but I like salt, so it was okay.

I also used three different types of hot sauce — Cholula (a mild hot sauce), D.L. Jardine's Texas Champagne (sorta hot cayenne sauce), and D.L. Jardine's Blazin' Saddle (super-duper hot habanero sauce). The recipe also called for cayenne pepper, but I left that out because I figured the habanero would be spicy enough. And I was right. The dish had just the right amount of heat.

Speaking of heat, the Nomicon recommends using a cast-iron stovetop grill to cook these. But I don't have one, so I chose the broiling method instead. And it worked well. But man, that oven is soooo hot when you broil things. I had to turn my air conditioner on!

On the side is Roads End Organic Alfredo pasta. It's the kind with whole wheat pasta! Very yummy! Quick and convenient.
Posted by Bianca at 11:56 PM

Dude, I was just reading that recipe last night when planning and prepping meals for the week!

That's one of my dad's favorite movies. Next time he suggests watching it, I think I'LL suggest we have some spicy tempeh to go with it ;o).

I totally dig that tempeh!
Here's a link to where you can get the Elvis toppers: http://www.etsy.com/shop.php?user_id=5150031