I had Whole Wheat Berry Love Muffins for breakfast! 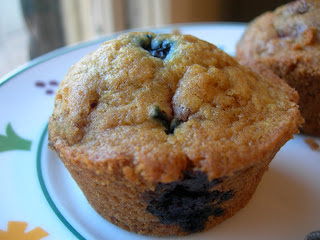 I used a recipe sent on the Farm Animal Reform Movement's "Meatless Monday" e-mails. It was recipe for the week of Valentine's Day, so the muffins in their picture were shaped like hearts. And they only had strawberries. I believe the original recipe came from "My Sweet Vegan," by Hannah Kaminsky. I figure it's okay to re-post since it was sent out in a mass e-mail by FARM (see recipe below).

The recipe called for one cup of frozen strawberries, and I only had a half-cup of frozen berries left. They were strawberries I'd hand-picked last spring on the Lansing's organic farm in Millington. I picked soooo many last year that I wound up freezing several bags and making five or six jars of strawberry jam. It's a good thing berry season is approaching because I'm on my last jar of jam, and I used the remainder of the frozen berries for this recipe.

I substituted a half-cup of frozen blueberries for the rest. So my muffins were more like patriotic red and blue muffins, rather than cute, red-specked Valentine's ones. But that's okay. Valentine's Day is over, and they were very tasty.

Here's the recipe (note: I changed the flour to whole wheat instead of all-purpose).

Mix together the dry ingredients in a large bowl. Stir in soymilk, oil, and vanilla. Be careful not to overmix.

Fold in berries. Pour batter into muffin tins, 3/4 of the way to the top.

Bake 15-20 minutes or until a toothpick inserted into the muffin comes out clean.
Posted by Bianca at 11:42 PM

I love Wasa crackers :o). Haha I even eat them plain!
Your muffins look much tastier, though.

Oh, and here's a funny irony: guess what movie is on tv tonight... Some Like it Hot!

Yep that recipe is from Hannah's new book My Sweet Vegan. You can check it out at http://www.mysweetvegan.com

Everyone should have a copy, it is one of those essential vegan books.