I found a very non-vegan recipe online for French Toast with Hot Sorghum Molasses Topping. And since I've recently learned a lot about the health benefits of molasses — calcium, iron, and magnesium — I decided to veganize the dish for possible use in my Southern vegan cookbook. 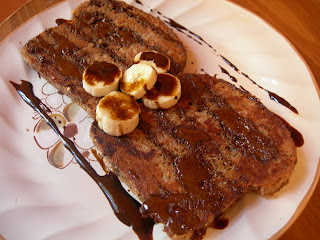 Though the recipe calls for sorghum, which is actually a little different from molasses, I only had blackstrap on hand. The awesome thing about this is the way molasses magically turns into a fluffy topping when heated with a little baking soda. You can't tell in the picture, but it completely changes consistantly. I used Food for Life sprouted grain bread in keeping with my "no white flour" rule. I made the toast "French" by dipping in soft tofu and frying in canola oil.

Tonight, I went to the Sanssouci Potluck. I almost didn't go because I hadn't prepared anything. But then my friend Hart called and suggested we make Vegan Bruschetta together. We used garlic, olive oil, canned stewed tomatoes, sliced grape tomatoes, fresh basil, a sprinkling of nutritional yeast, and avocado (Hart's idea).

We couldn't find any whole grain baguettes at the grocery store we went to though, so I ended up breaking my "no white flour" rule. But I decided to start making exceptions for potlucks and eating out. And it's a good thing because Tim made fresh bread with hummus (it was still hot from the oven) and Meredyth made tasty pasta. Dianna made a quiche from the 'Nomicon. And Matt made Thai peanut butter and banana soup (which sounds crazy, but it was totally yummy).
Posted by Bianca at 11:22 PM

The bruschetta was sooo good. Everyone loved it. Last night was a superb potluck. I want to make a molasses topping for French toast. Mmmm.

[P.S. I spell my name "Dianna" and this is how Meredyth's name is spelled.]

Bush has a Scottie, named Barney. Molly's plan was to marry Barney, then take over the White House and kick Bush out of office... but since he'll be gone in November anyhow, Molly has decided to forgo marrying Barney and wait for true love :o).

I've just recently heard about the health benefits of molasses too; who knew that a sugar source could be good for you?! The pancakes look delectable!