I Run for Beer (and Donuts!!) Virtual 5K

After most of our races were cancelled due to COVID, Paul and I got a little overly excited about virtual races with really cool medals! I signed up for a few; he signed up for more than he could handle. I convinced my friend Megan to sign up for one with me — the I Run 4 Donuts 5K from I Run 4 Movement (an awesome virtual race company). We planned that donut run back in late August and went through with our race, but Megan's medal got lost in the mail. So clearly, we had to do it again! But I earned my medal at the August run, so I ordered another medal/bib/tee for the I Run for Beer 5K. And you know what that means? We got to do a Beer & Donut 5K! 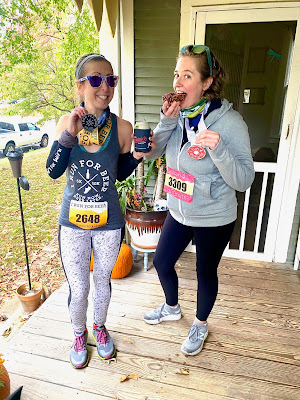 We met up in Overton Park last Saturday, and Paul joined us to run his International Space Station 5K (with a cool space station medal). Paul hasn't run much lately, and he was struggling for the first mile or so, but by mile 2, he'd left me in his dust. Still, I finished in good time; it was my third fastest 5K! 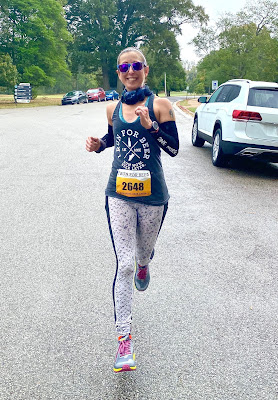 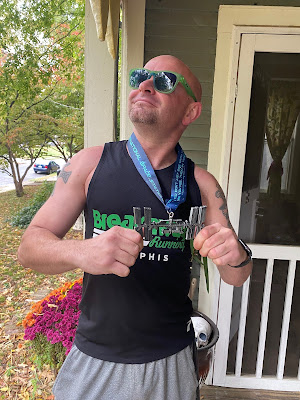 But the best part of running of a Beer & Donut 5K are the beers and donuts afterward. Saturday was a cold, drizzly, grey day, so we decided to drive the couple blocks over to Megan's house and have a toast with donuts on her porch. I ordered the Spooky Donut Box from the all-vegan Darling Donuts Memphis. This has red velvet skull cake donuts, a yeasted Bavarian cream-filled candy corn donut, an apple fritter, and chocolate sprinkle donuts. Megan and I each had a chocolate donut, and the halved the candy corn and fritter. 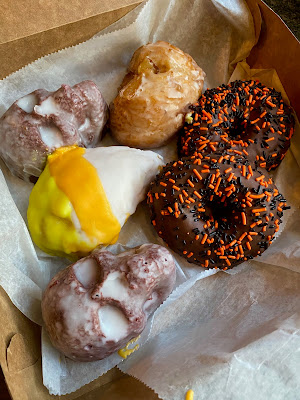 I had my skull cake the day before when the donuts were delivered because I couldn't help myself. Here's a sexy inside shot! Most of Darling Donuts' offerings are yeasted, but there are a few cake donuts. 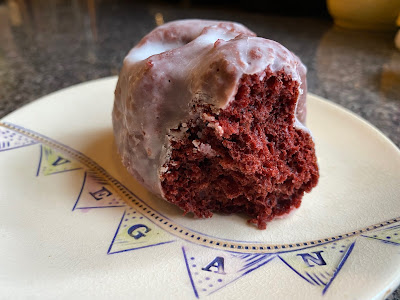 As for beer, I brought some Hi-Wire Oktoberfest that I picked up in Asheville at Hi-Wire Brewing. Paired perfectly with spooky donuts. And check out this cool medal. It's a beer opener! 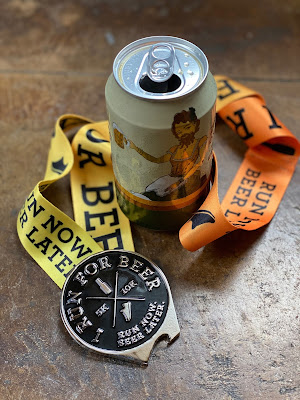 The candy corn doughnut is my favorite!!

I think your virtual races are more fun than most live races!

I love all the fun themes.