I do my best to eat well at home. But when I dine out, all bets are off! Isn't the whole point of eating out to treat yourself? Case in point — a couple weekends ago, I heard Plant-Based Heat (a new vegan pop-up) was doing a Vegan Fair Food pop-up on Beale Street. I couldn't miss that! I was so excited that I got there BEFORE they were even set up. I have a lot of FOMO anxiety around the idea that pop-up food events and potlucks might run out of food before I can eat, so I try to always be first.

The wait for them to set up paid off when I got this Vegan Funnel Cake! I haven't had funnel cake since, oh, at least 2004, probably longer. 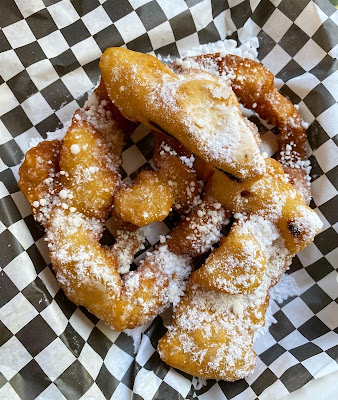 I also got an order of Vegan Corn Dogs with Mexican Street Corn. The corn dogs came two to an order, and while that seemed like a lot of food at the time (with the funnel cake), I was so glad to have a corn dog snack later in the evening. The street corn was FIRE. I need their recipe. 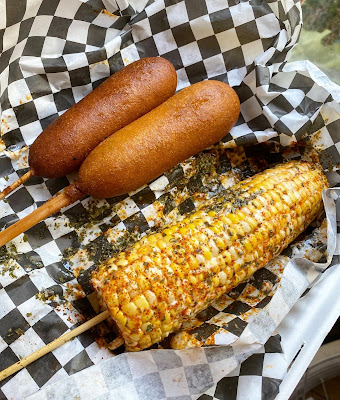 Speaking of treating yo'self, I rode my bike to Imagine Vegan Cafe a couple Takeout Thursdays ago, ordered the Fried Chicken Sandwich with Mac & Cheese, and ate my food in the Cooper-Young gazebo area before biking home. That was fun. I love Imagine's new fried chicken. They've switched to a different brand, and it's hand-breaded at the restaurant. 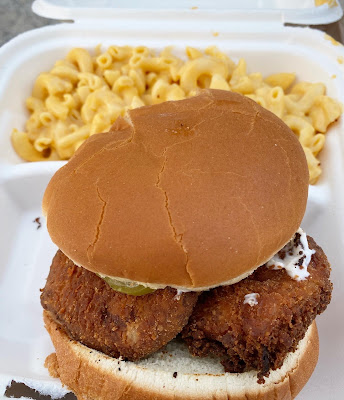 It's not all fried food and cakes though! Sometimes, I eat healthy carbs, like these Chai Pancakes from Eat Feel Fresh. They're gluten-free since they're made with quinoa flour (you grind dry quinoa in the coffee grinder). Really good, but the quinoa cakes are very delicate, a little hard to flip on the griddle. 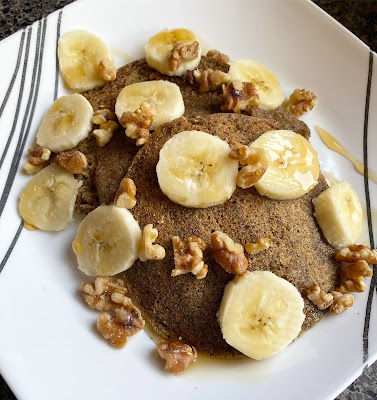 And finally, here's another at-home meal — Soy Curl Taco Soup! This hearty taco-inspired soup has Soy Curls, corn, black olives, tomatoes, and taco seasoning. It was really good. The recipe was printed on a card that came with my last order of Soy Curls. 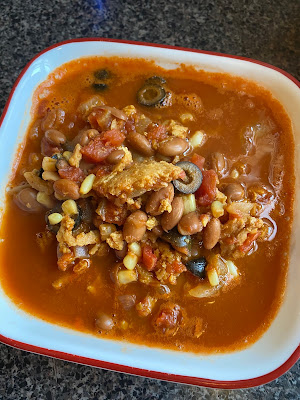 Ooooohhhh... yum yum yums! So many good foods here.
I have never had funnel cake, it is not a thing here and fairly certain that it would be too deep fried for my body to handle. But there is a scene in season 7 of Buffy where Andrew comes out in oven mitts and says 'this funnel cake is kicking my ass', so funnel cake always makes me laugh. Though I think you would not be wearing oven mitts to make funnel cake.

I haven't had a funnel cake in at least a million years!
I don't eat out often, but I always feel like when you do eat out, it should definitely be a treat, and something you can't or don't make often at home.

So much fun food here! I'm jealous of your options. I would definitely have to buy a corn dog & funnel cake too, if given the opportunity. J. Selby's in St. Paul makes vegan corn dogs, and that's worth checking out if you're ever in the Twin Cities!