I'm back! I've spent the past few days in beautiful Asheville, North Carolina for my 40th birthday. When COVID gives you lemons, you gotta make lemonade. Since I couldn't have a big blowout party with my friends this year, we decided to get outdoors and take our RV to the Smoky Mountains. I took a lot of pics, so I'm going to break my recap into three posts this week. Tonight, I'll share pics from Wednesday (when I drove to Nashville to meet up with Paul) and Thursday (when we left Nashville for Asheville).

On Wednesday, I took the day off so I could finish packing and get an early start on my drive to Nashville. Paul stays there part-time, and our RV was already parked at his parents' house, so I decided to drive there a day early so we could leave for NC first thing Thursday morning. But I had one very important task before I left Memphis. Early voting!! It started here on Wednesday, and I made sure to vote on the first day. Casting my ballot for Kamala (and Joe) felt SO GREAT, and we have some local candidates (Marquita Bradshaw!!) who are pretty exciting as well. The whole process took about an hour, but the line moved quickly and it was worth the time. 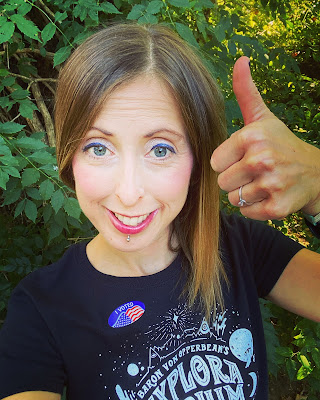 My mom came over to pet-sit for the week, so I hit the road shortly after she arrived. I got hungry on my 3-hour drive, so I stopped at a Burger King for an Impossible Whopper. I typically reserve these for road trips, so they're always a special treat. 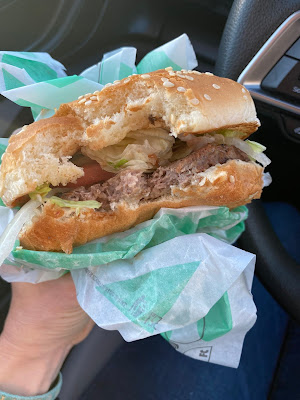 I arrived in Nashville a little before Paul was scheduled to get off work, so I killed some time the best way I know how. With ice cream! A stop through Nashville isn't complete without a visit to Koko's Plant-Based Ice Cream. I got a scoop of the pumpkin spice latte and the Dutch apple pie. 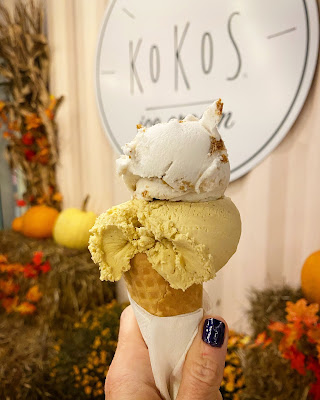 On Thursday morning, we loaded up the RV and car and headed for Asheville (about 5 hours from Nashville). I had some oatmeal before we left, but by noon-ish, my tummy was growling. We were afraid we couldn't get the RV through a drive-through due to its height, and most fast-food dining rooms are closed for COVID. So our only vegan fast food option was Subway. I got a Veggie Delite with all the veggies, plus guac and sweet onion sauce. Not pretty, but tasty. Subway just tastes like college to me, and I like that. I ate a LOT of Subway as a college vegetarian. We arrived in Asheville later than we'd hoped — around 5:30ish — thanks to traffic jams, a few stops along the way, and the time zone change that we forgot was a thing. Oops! But it was still daylight, so we had time to get our campsite all set up at the Asheville East KOA in Swannanoa. It was a beautiful campsite with a creek running through it and great mountain views. 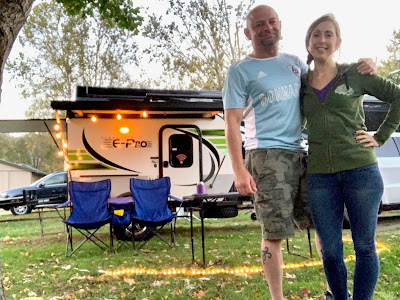 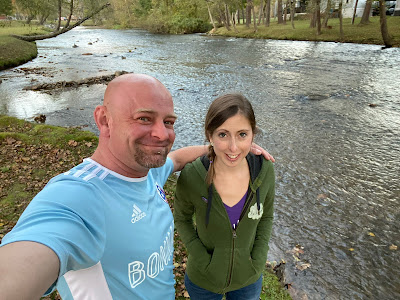 I brought stuff to make spaghetti in our camper kitchen, but we were tired. Even opening a jar of sauce and boiling noodles sounded hard, so we roasted Veggie Dogs instead. 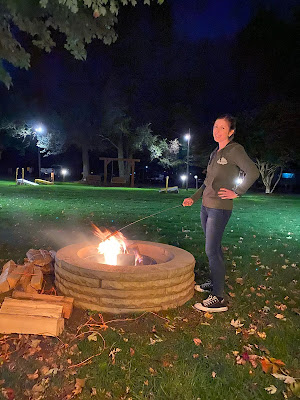 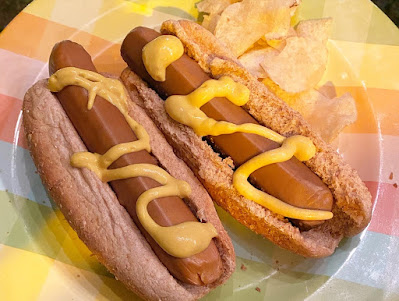 Not pictured are the vegan s'mores I made after dinner! We enjoyed a few beers around the campfire and met our cool neighbors, Jamie and Phil from Florida. Then it was time for bed! The next day, Friday, was my 40th birthday, and I wanted to get plenty of rest since we had a big day planned. I'll check back tomorrow with a birthday post!
Posted by Bianca at 6:00 PM

Ooh! Can't wait to hear about your birthday in Asheville! Glad you were able to kick off the festivities by voting for Kamala (and Joe) :)

Ice cream is the best way to pass some time! And those flavours sound amazing.