Y'all, I ran a real race a couple weekends ago! With real people! Most of the big city road races were cancelled from mid-March on through the rest of the year, thanks to COVID. But with things opening back up, some smaller trail races are going on as planned. And I'm so happy that I got to take part in one on Saturday, September 19! 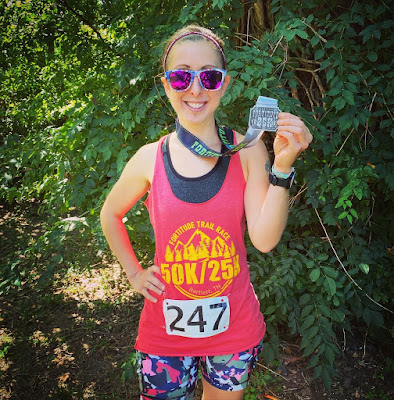 The Fortitude 25K/50K was formerly known as the Nesbit Trails Classic, and formerly known as the Stanky Creek 50K before that. I've signed up to run the Stanky 50K a couple years in a row, but both times, I ended up with stress fractures in my foot while training. One of those years, I volunteered at the race (with my fracture boot on), and I had a blast! Last year, my fracture healed in time for the race, but I wasn't ready for that distance, so I bumped down to the half-marathon instead. This year, the race has been taken over by an awesome Memphis runner named Peter, and he's simplified the race to only include two distances — 25K and 50K. Since it's his first year race-directing, this race was considered the first annual Fortitude Trail Race (even though the race has been around in other forms for years). 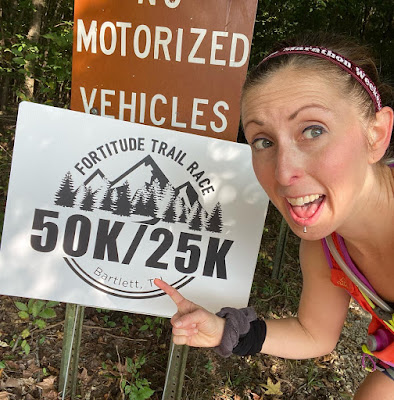 I would have loved to aim for the 50K again, but I assumed the race would be cancelled like everything else, so I didn't even make plans to sign up. Then, in early August, I got an email from Ultra-Signup that said the race was going on as planned, and there was a waitlist for the 25K. A 25K is about 15 miles, which is a normal weekend long run for me, so jumping into a 25K wasn't a big deal, distance-wise. So I added my name to the waitlist, not really expecting to make it in. But lo and behold, that happened, and I was out there running on the 19th!

The 25K runners did a 7.5-mile loop through the Stanky Creek trails two times, and the 50K runners ran that same loop four times. They had a staggered start, so the 50K folks started at 7 am, and the 25K runners began at 7:30 am. And we were all required to wear masks and distance at the starting area.

Once the race got going though, you could remove your mask and spread out on the trail. I very quickly ended up in the back (my favorite place!) and enjoyed my leisurely run through the woods. For most of race, I was completely alone, only getting passed by another runners every 2-3 miles or so. These small races make social distancing really easy!

Stanky is a tough course! Lots of hills, rocks, roots, technical terrain. I never expect to make good time out there, and I didn't this time either. But that's okay! Let's just put it this way — it look me almost an hour longer to run 15 miles than it would on the roads. There was lots of hiking involved and plenty of slow and steady running.

The aid stations (there were two) had individually wrapped snacks (chips, pickle packs, Oreos, pretzels, etc.) to stay COVID-safe. Normally at ultras, there's a big ole chip bowl, and everybody puts their grubby, sweaty, trail-strained hands in. But things have changed with COVID, and that's one change that's probably for the better. The only aid station snack I took was a pickle juice shot halfway through, but I packed my own water and Plant Bites (whole food, plant-based running nutrition) in my Nathan hydration vest. 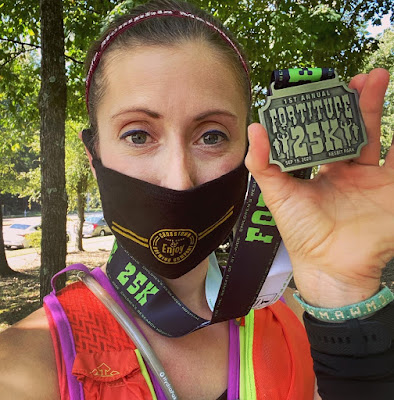 All in all, I had a GREAT RACE! And Peter did an excellent job directing this first annual event during some wild and crazy times.

After the event, we went to my friend Jennifer and Simon's socially distanced backyard BBQ! We each brought our own food to grill (Lightlife brats for me and Paul), and Jen made some of her awesome spinach-artichoke dip and French onion dip. Plus, not pictured, the world's best almond cake. A perfect post-run feast! I was so hungry that I had two plates. 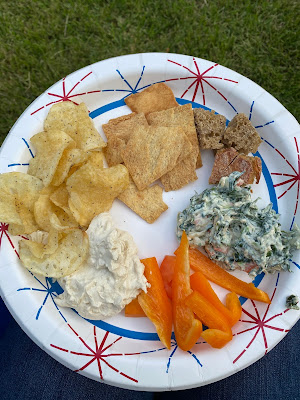 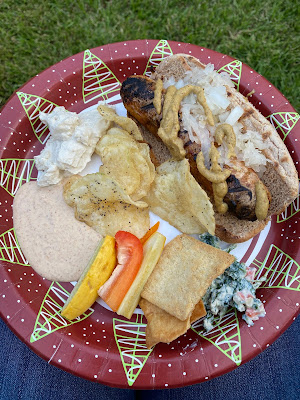 Yay, I'm glad you got to run in an actual race!! I'm sure it felt wonderful on so many levels!
I've been craving spinach artichoke dip. You definitely deserved two plates!

Hurrah! I am so glad you have been able to get back out in a race. Sounds like they were taking things very carefully, which is good. I have seen too many places here doing things where there is obviously no social distancing and almost no one here wears a mask. Love that you could get a pickle juice shot on the trail!