Opening a restaurant during a pandemic might sound like a crazy idea, but that's exactly what Parish Grocery in Memphis did! I live just a few blocks from this new Cajun/Creole restaurant, which is situated smack in the center of the Evergreen neighborhood (in the old Atomic Tiki space). When they opened, I didn't have high hopes for vegan options, as vegan items don't tend feature prominently on Cajun/Creole menus. But a few weeks after opening this past spring, Parish announced they were adding a vegan Fried Green Tomato Po'Boy to the menu! 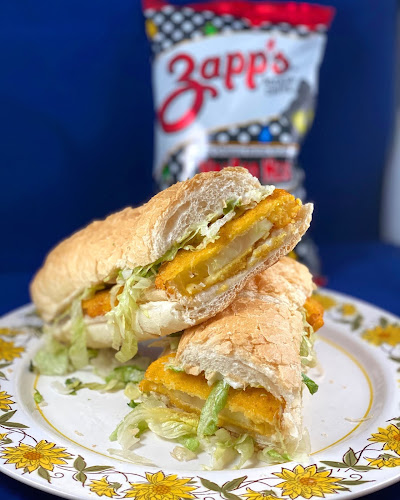 Woo hoo! I tried to order it right away, but on the day I called, they had already sold out of the sandwich for the day. So I finally had a chance to try again last week. This sandwich is on the menu as a Fried Green Tomato BLT (with actual bacon), but the menu indicates instructions to "make it vegan" by requesting no bacon, add vegan mayo.

It's really great! You can't go wrong with fluffy/crusty po'boy bread and fried veggies. This reminded me of my favorite French Fry Po'Boy from Verti Marte in New Orleans.

On the side, you can get vegan black-eyed pea salad or Zapp's chips. I'm sure the black-eyed pea salad is tasty, but it's hard for me to resist Zapp's Voodoo Chips. Zapp's are a NOLA tradition, and the Voodoo flavor is a combination of ALL the other chip flavors (BBQ, salt & vinegar, and jalapeno mixed together!!!).

I also noticed that they have a vegetarian muffuletta on the menu, which would be vegan if you left off the Swiss. Muffulettas are awesome because olive salad is the greatest thing in the world. I'll definitely be trying that one soon!

Besides food, Parish Grocery is also the closest place to my house that serves sno-cones (known as Sno Balls in New Orleans). Tiger's Blood or Tutti Frutti? I can never decide!

I have never had fried green tomatoes, and I think that is such a sin on my part!
That po boy looks incredible, and of course being gluten free the bread is really making me drool!