I started the Blue Zones Challenge on January 1, using Dan Buettner's book of the same name. The challenge extends beyond the plate to include social interactions, movement, and stress reduction. But I'm focusing on the food in my posts. Most of my meals have been from the challenge book or from The Blue Zones Kitchen cookbook, and they're very heavy on whole foods. But of course, I have to eat out sometimes. So here are a few meals I've eaten from restaurants during the challenge.

I love to stop by Raw Girls on my way to the office when I actually go in (I work from home several days a week). And their Mung Bean Noodle Bowl is one of my faves. The winter version of this has butternut squash, pom seeds, pecans, and pesto, and it's awesome. 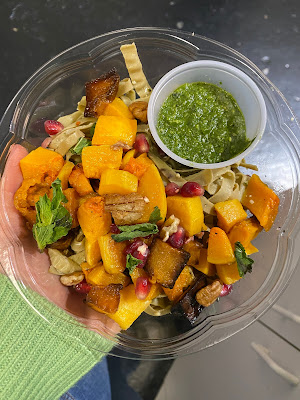 They also have hot soups in the winter, so one day, I grabbed some Curry Dal Soup with an order of their raw Flax Crackers. 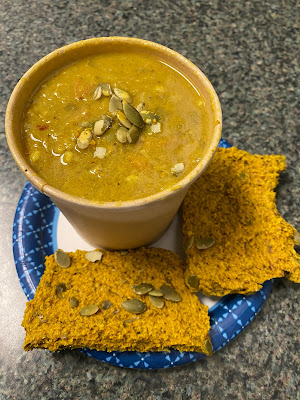 A couple Fridays ago, my friend Shara had her 40th birthday. And she's doing Dry January, so she wanted to do something that didn't involve booze. After brainstorming for a while, we all decided that it would be fun to go to the Wolfchase Mall and walk around like teenagers. So we did! And of course, that meant dinner was in the food court. Lucky me, they have a Chipotle, so I got a Tofu Sofritas Bowl. This was two meals for me. One of the Blue Zones concepts involves stopping eating when you feel full, so I tried to practice this here (and it worked!). By the way, the mall lighting was terrible. 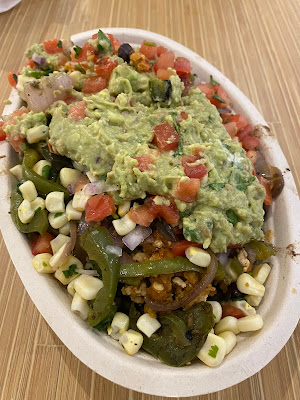 And finally, Paul and I went to dinner at RP Tracks after a 3K race a couple Sundays ago. And I opted for the Vegetarian Club Sandwich (tofu, vegan tomato aioli, coconut bacon) and Sweet Potato Fries. By the way, if you're local and order that sandwich, be sure to them to swap the bread. It comes on honey-wheat, which is the only thing that makes it not vegan. I like to sub on the rye. 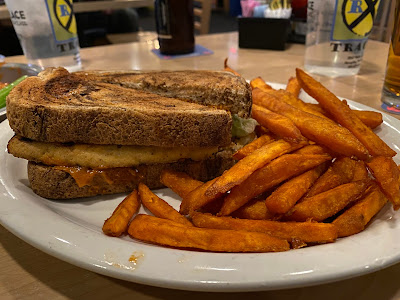