On Saturday night, Paul and I had a date night in Nashville at a — gasp! — steakhouse. Now I know what you're thinking. But Paul still eats meat, and he ran a half-marathon that morning so it was his day to celebrate. Plus, he had a gift card to pay for the meal.

The place was Kayne Prime, which happens to be one of the most acclaimed steakhouses in Nashville, and it's is SUPER fancy. Like so fancy that we felt a little out of place, even though we were all dressed up. 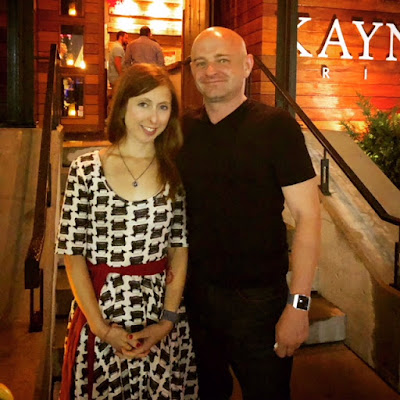 Paul won the gift card at work, and he had a selection of several steakhouses to choose from. But he picked Kayne Prime specifically because he'd read they had vegan options for me. After perusing their menu, I gave my approval, and he made a reservation.

We arrived a little too early though, so we had a beers at the bar while we waited. After we were seated, I opted for a cocktail since the place made me feel fancy. I find most cocktails are too sweet for me, so I typically opt for beer or wine. But when in a fancy restaurant ...

I ordered a Ginger Spice Cocktail with Ketel One Vodka, St-Germaine, grapefruit, lemon, and ginger because it didn't sound too sweet. But when it arrived, it was pretty darn sweet. Tasty but no way I could drink more than one. Probably should have gone with a dirty martini. Oh well. 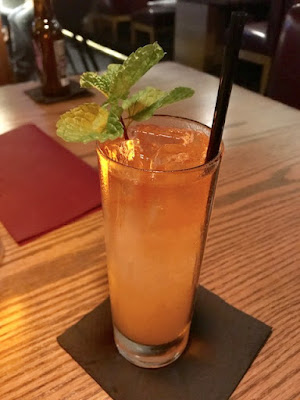 We ordered some Kennebec Fries with truffle oil to share as an app. OMG. This was seriously my favorite part of the meal. These just look like ordinary fries, but they were saturated with truffle oil. I find truffle fries are usually lacking in truffle flavor (probably because it's pricy and people tend to use it sparingly). But I love that truffle flavor, and I like it to be strong. We devoured every last one of these. 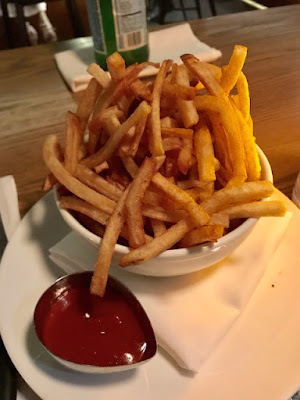 Somehow, I still had a little room for my entree — Cauliflower Steak!! 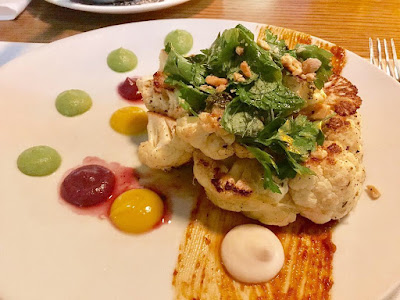 Yes, even a vegan can get a steak at a steakhouse! This grilled cauliflower steak was slightly caramelized and filled with flavor. I'm not sure what all the sauces were, but I asked about the white one to make sure it was vegan. They said it was almond cream. I'm guessing the others were cilantro chutney, curry sauce, and maybe a beet ketchup? Regardless, they all tasted delicious.

We had a great experience at Kayne Prime, and I'm so grateful for amazing vegan options!
Posted by Bianca at 9:00 PM

That is so great that they have vegan options! The chips sound amazing, and the cauliflower steak looks great.

Happy Anniversary! I never feel like I fit in at fancy restaurants! You guys look amazing, and how sweet of Paul to make sure there were vegan options!!

Happy Anniversary! You look so pretty and that dress is so cute! I agree with Hillary, it was so sweet of Paul to make sure you'd be able to eat there. The fries look incredible and the cauliflower steak is beautiful!

So nice a steak house has some vegan options! It looks pretty awesome.

Some advice on the cocktail scene. I am NOT a sweet cocktails person. I like tasting my alcohol thank you! It isn't ALWAYS true but I find if it has vodka, it's gonna be syrup-y sweet. I always start by looking for whiskeys and bourbon. But ask for what their "savory" cocktails are, or ask the waiter if they could make a strong cocktail for you. Naturally you are then at the mercy of the person behind the bar, but sometimes they like that and will deliver on something awesome.

I feel like it’s just as important to eat at omni restaurants and order their vegan option as it is to eat at all vegan restaurants so they know the demand is out there. Your cauliflower steak looks fabulous! And my gosh those fries.....wow. I love truffles but often truffle oil flavored things are meh at best. There’s a fancy italian truffle salt a friend gave me as a gift that had the most intense truffle flavor! Unfortunately long gone now, but was significantly better flavor than any truffle oil.
Ttrockwood

I feel the same way about cocktails. They are pretty much always too sweet for me. I only like clear liquors. So maybe the drier cocktails are usually made with brown liquors. When I find a place with a really good dirty gin martini, I'm happy!

The cauliflower looks very inviting, but the meal doesn't look very filling. I get a little crabby when restaurants don't offer anything in the way of protein for vegans - like beans, tofu, or seitan. Were you full afterwards?