Here we go again with a bunch of random meals.

Last week, I had part two of a root canal. My tooth was so bad that it took my dentist two appointments, totaling 5 hours(!!!!!), to finish my root canal. The procedure didn't hurt since they kept me numb, but having doctors in your mouth for that long really sucks. And then my teeth totally hurt afterward. So last Tuesday, after they finished, I came home and immediately had some Ben & Jerry's Non-Dairy Chocolate Fudge Brownie Ice Cream with CocoWhip. 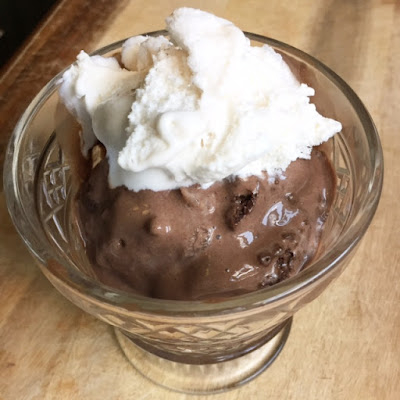 I bought some blueberries on sale last week at Kroger. I can't wait until the fresh, local berries come in, but until then, these will do. These were super-sweet and plump. I had some on a Lemon Poppyseed FitQuick Protein Waffle. Also maple syrup and banana. 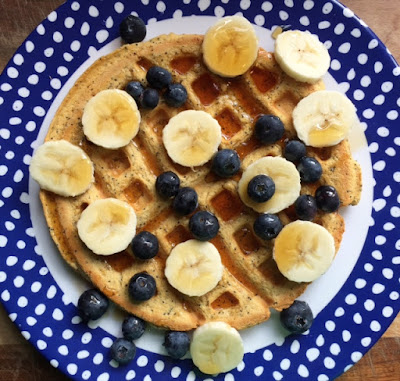 And I had some on So Delicious Passionate Mango Coconut Yogurt. I mixed in a half scoop of vanilla Nutiva protein powder since So Delicious yogurt has less than one gram of protein. If I eat a breakfast without any protein, I'm hungry again an hour later. Also added the bloobs, fresh mango, and locally made Guilt-free Pastries Vegan Granola. 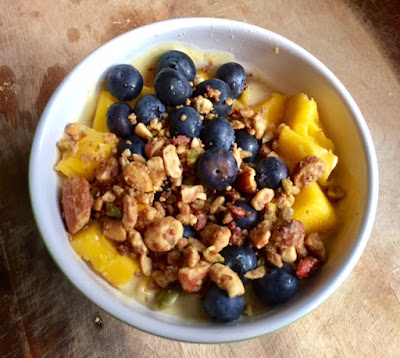 Speaking of yogurt, I had some again this morning. Daiya Strawberry Greek Yogurt with fresh, local berries and Bear Naked Dark Chocolate Sea Salt Granola Bites. No need to add protein powder to this yogurt since it already has 8 grams. That's plenty for my non-running days. I'm in the taper for this weekend's half-marathon, so I've backed off the miles significantly this week. Gotta keep these legs fresh! 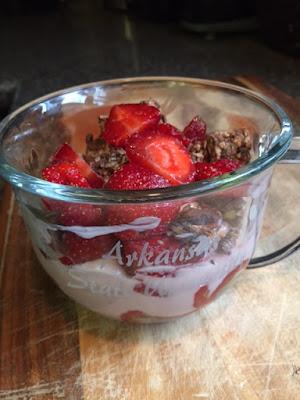 But speaking of running, I did have one last pre-race, long(ish) run on Saturday. Only 8 miles, but that was still long enough to justify my favorite pre-workout meal of an Apple Cinnamon Dave's Bagel with Sunbutter and Bee-Free Honee. Extra cinnamon sprinkled on top! 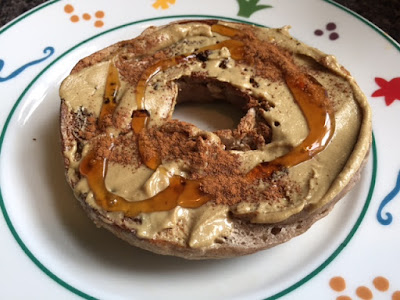 One day last week, I wanted a Bagel BLT for dinner, but I didn't realize until I was making my sandwich that I'd accidentally tossed out my good lettuce when I was cleaning out old veggies in the crisper. Oops! So instead, I just had a BT. Sweet Earth Foods Benevolent Bacon (hence the brown edges), buffalo hummus, and tomato on a Cajun Dave's Bagel. 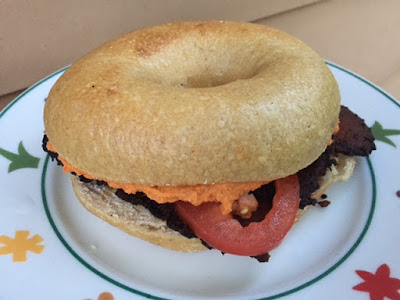 On Wednesdays, we have office-wide staff meetings at lunch, and I typically bring my own. But last week, I popped across the street to Mama Gaia before the meeting to grab takeout — Gaia Pita (baked falafel, hummus, lettuce) with Baked Oven Fries and Organic Ketchup. Yum! 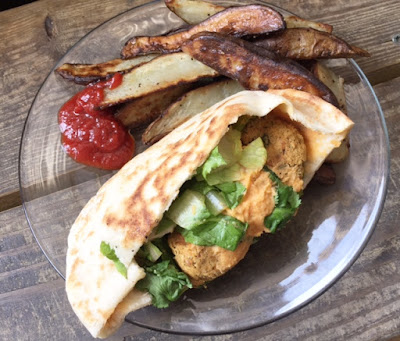 More stuff I ate tomorrow!!
Posted by Bianca at 9:00 PM

I really love the sound of buffalo hummus. I used to love benevolent bacon, I think it's one of the best facons out there. I hope your mouth is feeling better. Dental procedures are the worst.

Yum!!! Everything looks so good! Root canals are the worst and ice cream is the perfect way to treat yourself after. The yogurt bowls both look really delicious as does that falafel! And you know I'm all about the bagels :)

Loving all these meal ideas. My two favorites are the yogurt & granola + the ice-cream!

Oh my goodness all this food looks amazing!!!
Izzy | Pinch of delight