Lately, it seems like I've been living mostly off convenience foods. It's not that I've been super busy. I've just been super lazy, and I always tend to get that way as the holidays approach. It's probably because I know that the crazy gift-buying, wrapping, crafting, party time is coming up, and I'm conserving energy. At least that's what I'm telling myself.

Anyway, living off convenience foods is fine when they're on the healthier side. Hilary's Eat Well sent me some coupons to try a few products, and these were packaged foods I could feel good about. I went with the Black Rice Burgers and the Broccoli Casserole Bites.

Hilary's Eat Well makes several varieties of veggie burger, and I'd tried a few in the past. But the Black Rice Burgers were new to me. 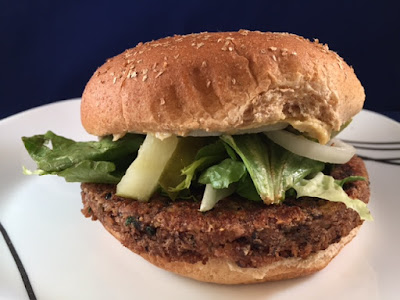 They're made with a base of millet, adzuki beans, jasmine rice, and that namesake forbidden rice (otherwise known as black rice). They also contain a ton of awesome veggies — sweet potato, arugula, beet greens, chard, collards, dandelion, kale, parsley, and turnip greens. So many greens! The texture is more on the squishy side, but I like that in a veggie burger that's actually made from veggies. That said, I prefer my more protein-packed burgers to be meatier.

This burger is definitely not a protein patty though. It only comes in at 4 grams per patty, but sometimes, a girl needs her veggies. And this is a great way to get them! Other burgers include Hemp & Greens, Adzuki, and Root Veggie. 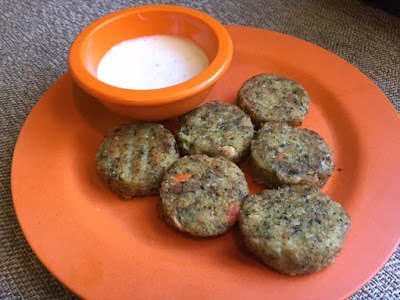 These are made with millet, broccoli, white beans, carrot, and onion. They really do taste like the homestyle broccoli casserole I grew up with, but they're probably much lower in fat. I love that these are naturally vegan! I had mine with vegan ranch for dipping, and they were just perfect as a fun, easy entree (with a salad on the side). These would also be perfect for party snacks!

Hilary's also makes Spicy Mesquite Bites and Mediterranean Bites, and I look forward to trying those. They make salad dressings, but I've yet to find them in stores here. They've also released a new line of veggie sausages, so I hope to find those soon. If I do, expect another review!

Oooh yum, these look great! I can get into patterns where I rely on convenience foods mostly due to my own laziness. I like the sound of Mediterranean bites! Sounds like it would be right up my alley.

I'm not the biggest fan of the Hillary's burgers, (or the price) but those broccoli casserole bites sound pretty delicious, and I like the idea of dipping them in vegan ranch!!