On Black Friday, I celebrated 12 years vegan and 22 years vegetarian! I went vegetarian on the day after Thanksgiving (after a six-month experiment being a semi-vegetarian and consuming chicken and fish) back in 1994, and I went all the way vegan on Black Friday in 2004. Even though that date changes year to year, I choose to celebrate on the day after Thanksgiving because it's just easier to remember. 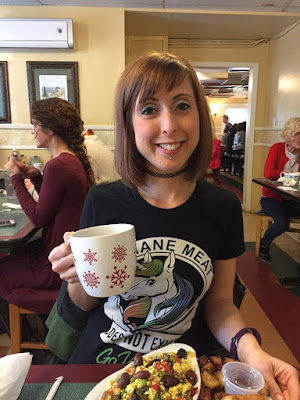 Both diet/lifestyle changes were solely motivated by my concern for animal rights. When I went vegetarian, I was 14 years old and hell-bent on changing the world. My friend Purvi, who emigrated to the U.S. from India, was vegetarian, and she made it look easy enough. And even though I grew up in a small Arkansas town, eating vegetarian was fairly easy. But then again, I did eat a ton of cheese pizza and mac and cheese. By 2004, at age 24, I'd gotten more active in the animal rights movement, and I'd made an awesome vegan friend named Jil (she later moved to New York, but I miss her!). I was living in Memphis and doing lots of PETA demos. I even helped launch a now-defunct group called Memphis Area Animal Rights Activists. As I learned more about the horrors of dairy- and egg-farming, going vegan seemed imperative. So I made the vegan switch on the day after Thanksgiving in 2004. And I've never looked back! Greatest decision I've ever made.

I always start my veganaversary with a leftover slice of Thanksgiving pie for breakfast! This year, that was a slice of my mama's Upside Down Apple Pecan Pie with CocoWhip. 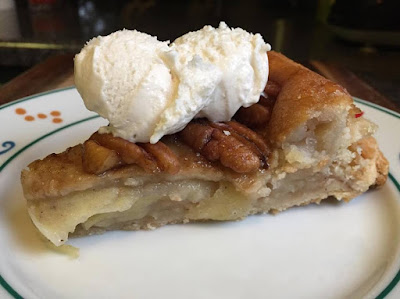 My mama and I do some late-day Black Friday shopping (no waiting in line at 5 a.m. for us!), so we meet first for brunch at Brother Juniper's. Just about every year, I celebrate my veganaversary with their Fahim's Special Tofu Scramble, Home Fries, and Homemade Multigrain Toast with Jam. 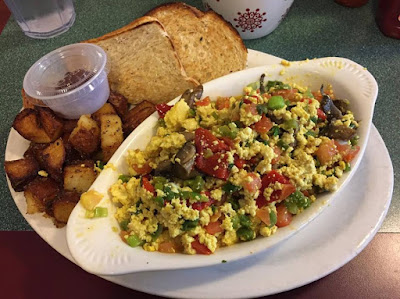 Pro tip: Fahim's Special (a scramble made with tofu, portabellas, and roasted red peppers) is no longer on the menu, but they can make it by special request. They removed it from the menu because it used to be served with kalamata olives, and they weren't selling enough of the dish, so they took it off the menu so they could stop carrying the olives. It's weird since olives keep for a long time, but whatever. My mama and I bring our own jar of kalamata olives and add them ourselves (BYOO, am I right?).

Then we spend the afternoon seeking out Black Friday deals in clothing shops. This year, we found lots at H&M and some things at American Eagle (I love their jeans because they make them to fit short people).

After our shopping excursion, my mama headed back to Arkansas, and I went home to heat up a big ole plate of Thanksgiving Leftovers. For me, the leftovers are more exciting than the actual Thanksgiving meal! I've been eating plates like this all weekend and just finished everything up tonight. I'm glad to get back to normal, healthier eating, but I'm sad that it's all gone. 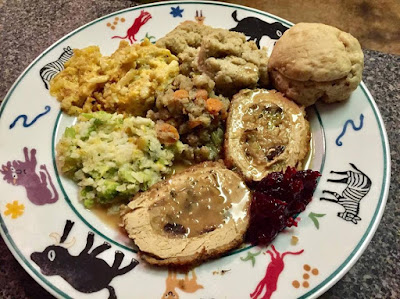 Congrats, Bianca!!! And I really, really hope you share that upside down pie recipe someday. It's so clever!!!

Congratulations on 12 years vegan!! That's a terrific achievement. I can't think of a better way to celebrate than with some delicious vegan eats.

That vegan roast looks KILLER! Gotta get one of those for Christmas. Happy Veganiversary!

Happy Veganversary!! That is amazing! You have certainly inspired many others in your journey :) That upside down pie looks insane! I could definitely go for some of that right now.

Happy vegan-versary. You continue to inspire me in my quest to eliminate all animal products from my diet.

BTW - The title of your post has strange echoes of Twelve Years a Slave. Certainly, a much much much much [insert infinite muches here] more joyful alternative.

You might find it hard to believe how grateful I am for your blog. I check it out whenever I want to eat out. It's on your blog where I have found all my favorite places.