Fun Times with My Best Friend!

Okay, I KNOW I'm said I'd stick to the Vegan Mofo themes this month, but I'm realizing that it's just going to be too difficult this month. I have lots of fun things planned (including a trip to Atlanta VegFest next weekend), and I'll want to share food pics from those events this month. Plus, I've got reviews lined up and so many "stuff I ate" pics. Sticking to the themes would mean not having space for all of that stuff, so from here on out, I'm just doing Vegan Mofo my own way! Also, I may not blog on weekends any more cause I really enjoy having a break each week.

Today's Vegan Mofo theme was supposed to be about comfort food, but I really want to share with y'all all the delicious food I ate over the weekend with my best friend (since the 7th grade!) Sheridan and her partner Drew. They were in town for a belated birthday celebration with me since they couldn't make the trip up from Little Rock for my actual birthday. 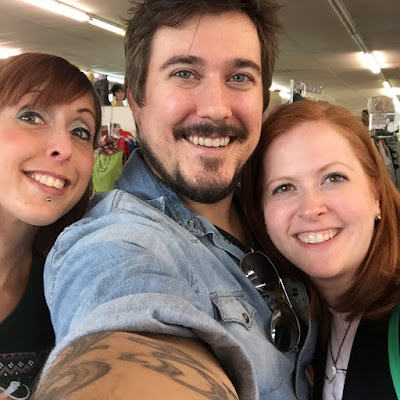 They arrived in Memphis just after lunch on Saturday, so we immediately headed to Abysinnia for Ethiopian buffet. Sheridan had never tried Ethiopian food, and she loved it! The buffet there is, like, 95 percent vegan! There's only one meat dish to avoid. We ate so much food!! I ran 20 miles Saturday morning before they arrived, and I was famished, but even I couldn't finish my plate. 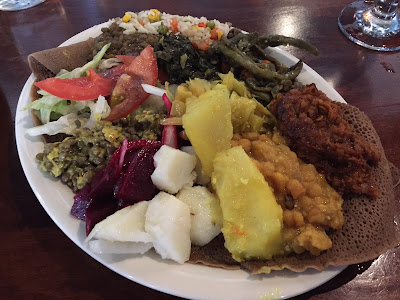 Since all we really care about is eating delicious vegan food, we didn't plan much for the day besides meals and snacks. And that meant having to kill some time before we were hungry again for dinner. We did a little thrift shopping at the Cleveland Street Flea Market. 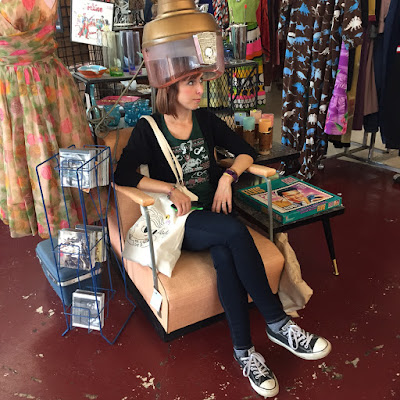 And then we stopped for beers at High Cotton Brewery. They had $1 pints of hefewizen since they were trying to empty the keg. I don't even care for hefewizens (too wheaty, too light), but I can't pass up $1 beers. 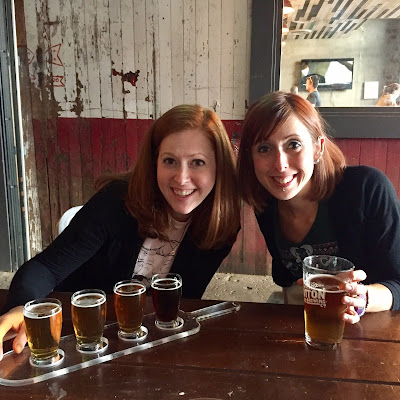 After beers, we did some shopping at Urban Outfitters. Sheridan and Drew tried on some adorable furry heads. 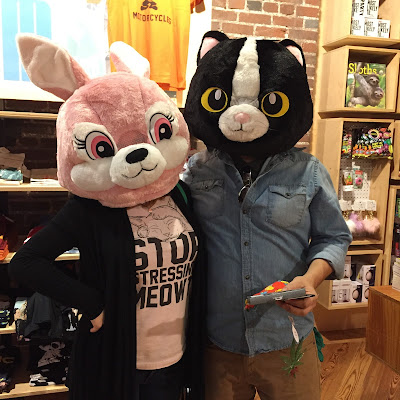 By that point, we were KINDA hungry. Not really. But it was dinner time, so we figured we should eat again. Sheridan and Drew hadn't been to LYFE Kitchen since it opened in Memphis, so we headed over to the East Memphis location. I had the Corn Chowder since it was such a chilly fall night and some Roasted Butternut Squash and Brussels. 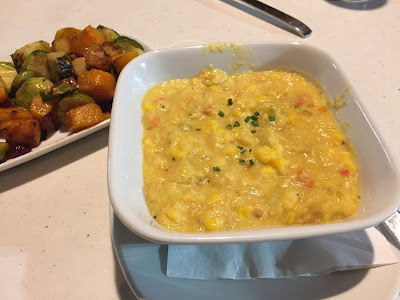 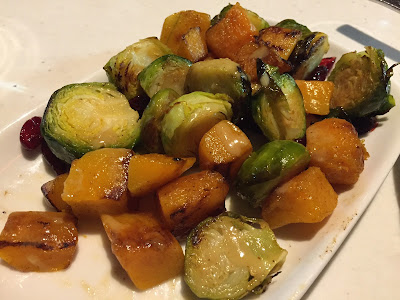 Then it was time for dessert!! We hopped over to Ben & Jerry's for Vegan P.B. & Cookies Milkshakes (made with almond milk). This was seriously the best thing I've consumed in a long time. I need to have another one VERY soon. 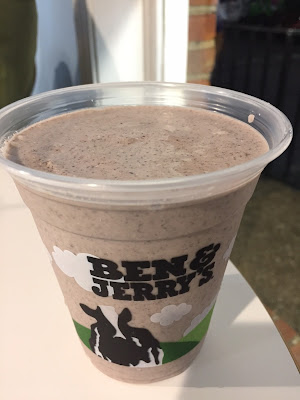 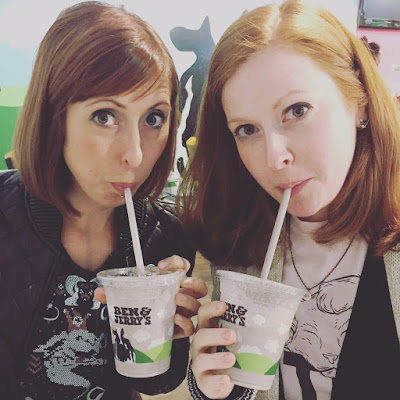 We closed the night out at the Rec Room — a barcade in the Broad Avenue Arts District — where we played lots of Street Fighter and Galaga. 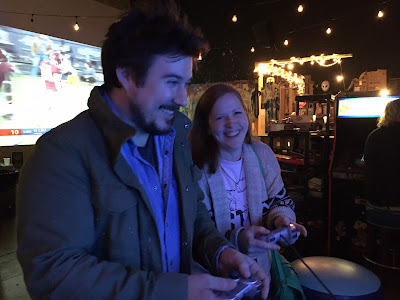 We forgot all about Fall Back Time! We woke up at 8 a.m. thinking it was 9 a.m. We had brunch plans at 11, but we were hungry! So I whipped up some Chocoholic Baked Doughnuts from Chocolate Covered Katie's cookbook. These were cakey doughnuts with cocoa-coconut glaze. Perfect morning snack. 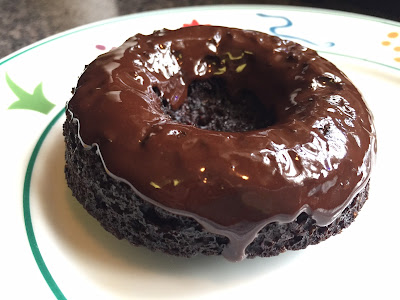 When 11 a.m. rolled around, we headed over to Midtown Crossing Grill for vegan brunch! We had our hearts set on biscuits and gravy, but owner Octavia informed us that her batch of biscuits didn't work out. So she offered to give us Baguettes with Vegan Sausage Gravy at no charge! And you know what? Turns out baguettes go great with gravy! 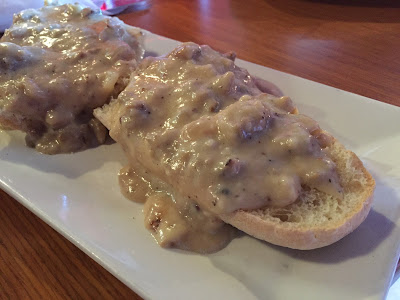 We also ordered the Build Your Own Tofu Scramble with vegan cheddar, tomatoes, potatoes, bell peppers, and jalapenos. So good!! 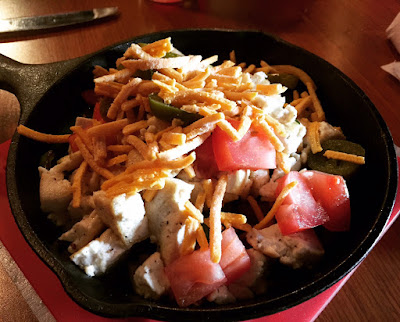 After brunch, Sheridan and Drew had to head home. But we had a great time this weekend! Love my best friend!!!!!
Posted by Bianca at 8:25 PM

That corn chowder looks so dreamy! I love the picture of you under the old hair dryer thingy, hilarious. Looks like a super fun weekend!

That looks like such a fun weekend & I always love seeing what you and Sheridan get up to when you hang out!

I've only been to Blue Nile. Can't wait to try the buffet at Abyssinia!

Ethiopian food is always so amazing!
That corn chowder meal with roasted fall veggies also looks great. I'm a sucker for seasonal meals. Do you think the chowder was made with coconut milk or something different?

Hey Maud! They use a cashew cream base, but it may also have some sort of plant milk. Probably almond??? Didn't have much coconut taste. It's so good though!

There's a fabulous ethiopian restaurant not far from me called Abyssina! Too funny. Love how vegan friendly and seriously delicious it is.
What a fun weekend , I'm impressed you just whipped up a batch of doughnuts! And impressive ben and jerry's makes a vegan milkshake- their vegan flavors are so good i hope they add more
Ttrockwood

Is there anything more comforting that eating food with friends? This totally fits the theme!
:D

Yayyyyy!!! I love coming to visit! So much fun! Can't wait to see you again for the holidays! Love you!