It's time for another meal round-up! As usual, I'm breaking this up into two posts — one today, one tomorrow — because I have so many pics! Today's post is all about waffles and vegan cheese and doughnuts. All the best foods!

Oh waffles! How I love thee! I picked up some fresh figs from Curb Market — a grocery store that only sells local and regional produce and dry goods. They were juicy and sweet and perfect atop some Ezekial Sprouted Grain Waffles with maple syrup and a side of Simple Truth Organic vegan sausage. 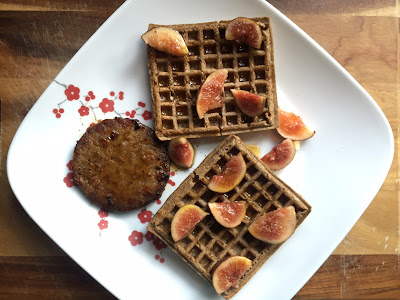 It wouldn't be a proper "stuff I ate" round-up without some pics of my favorite vegan protein waffles by FitQuick! The mix has 22 grams of protein, which is perfect for post-workout. I made a FitQuick Pizza Waffle last week after a run. I stuffed the batter with Daiya mozz, fresh herbs, and chopped kalamata olives before cooking. I usually top these with marinara, but this time, I opted to dip instead. I think I like dipping best because the waffle stays crispy. 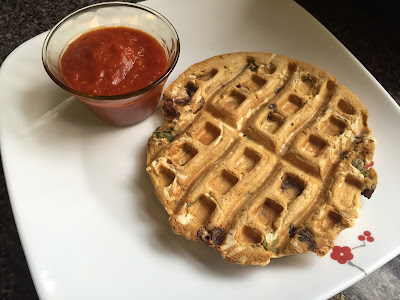 More FitQuick! Last week, Holly Noll — the owner of FitQuick, vegan gym New Ethic, and a co-host of the Rise & Resist podcast — posted on Instagram about making mug cakes with FitQuick mix. The package only has instructions for making waffles and pancakes (or doughnuts, if you get the pronut mix). To make protein mug cake, just mix FitQuick mix with plant milk as per regular instructions, but do so in a mug. Then nuke it in a microwave for 2 to 3 minutes (Holly says 1.5 to 2 minutes, but if your microwave sucks like mine does, the extra time is needed). I made a FitQuick Vanilla Sprinkle Mug Cake using the protein doughnut mix. I frosted it with Kite Hill Plain Cream Cheese sweetened with maple syrup. 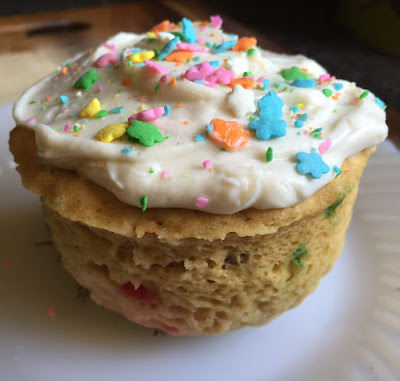 Speaking of sprinkles, look at this doughnut! It's a Chocolate Frosted Doughnut from Larsen's Bakery. Enjoyed last week while doing some work at home after-hours. You can order a whole 11-doughnut sampler from Vegan Essentials, as my dad did for me back in January, and freeze them for a long time. I'm slowly working my way through my January stash. 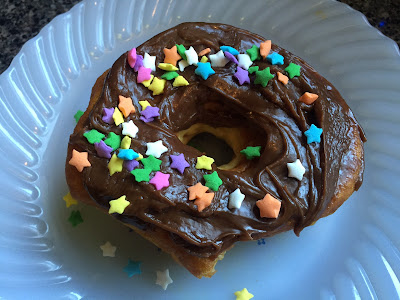 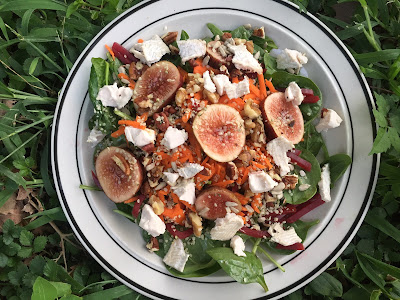 I had leftover Kite Hill aged almond cheese and leftover figs. So I whipped up some quick fig preserves by cooking them down with balsamic vinegar, sugar, and shallots. I enjoyed that as a snacky dinner with melba toast and chipotle hummus. Giant salad on the side. 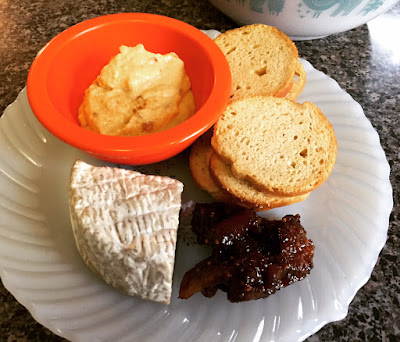 My buddy Leslie moved to Seattle a few weeks back, and she had a going-away potluck/baby shower (she's preggers) at her house before she left. I made the Spiced Lentils with Peas & Spinach from Vegan Slow Cooking by Carla Kelly. It's pictured here as my next-day leftovers with some homemade harissa that another girl brought, and there was brown rice underneath the lentils. Leslie loves Indian-inspired dishes, and this was perfect since I was pressed for time, and it took exactly 10 minutes to prep. The Crock Pot did the rest! 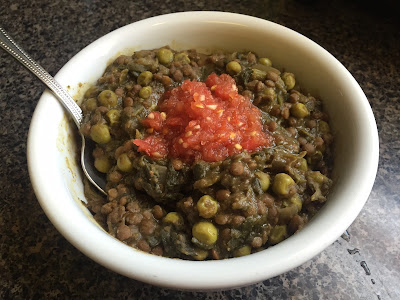 Here's my potluck plate. One of those big pastries was stuffed potatoes and the other with spinach. Leslie's husband is from Palestine, and this is a traditional dish. But she couldn't remember the name. Also on the plate are roasted brussels, hummus and pita, and Taki's rolled tortilla chips (they're vegan, and they taste like Doritos!). 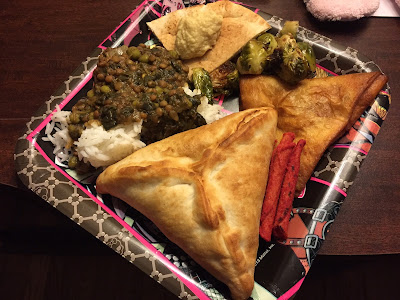 Everything looks so delicious! I am in love with the Kite Hill cheeses that I've tried. They're pricey, so it's a real splurge, but it really is worth it! Your plate from the potluck is causing some serious drool!

Doughnuts, waffles, and cheeses really are the best foods but I also like the look of those potato and spinach stuffed pastries. Yum!

Everything looks yummy. My family is pretty much all about dipping for the same reason. I cringe when people pour all that maple syrup on their pancakes, knowing they will be left with soggy bloated pancakes. My sister even tought my nieces to dip their pancakes into maple syrup XD I think it drives my husband nuts. I usually opt for powdered sugar on my pancakes and call it a day.

Those potato and spinach pastries look amazing - so big and satisfying.
Hurrah for waffles! I really like the idea of a savoury pizza waffle.