My friend Cassi of the Pretty in Pink Vegan went to Japan last month. All by herself! She didn't speak a lick of Japanese, but she just decided that she wanted to see the world unaccompanied. So she did. I was quite proud of her. As much as I love traveling the states alone when I can, I don't think I'd ever have the balls to travel to a foreign land on my own.

I only know a few things about Japan, and one of those is that it's home to the Shin-Yokohama Raumen Museum. Yes, a museum devoted to my favorite food — ramen! If I were to ever visit Japan, that'd pretty much be the highlight of my trip. Well, turns out there's more than one ramen museum. Cassi found the Momofuku Ando Instant Ramen Museum! Even better. Nothing — and I do mean NOTHING — beats an instant cup o noodles. It's hard to find vegan ones, but the local Asian market and the kosher Kroger has some.

But what if you could make your own instant ramen? Visitors to the Momofuku Ando Instant Ramen Museum can customize their own cup! So that's what Cassi brought me back as a souvenir. It came in this crazy inflatable bag. Oh, Japan, you're so cute and weird! 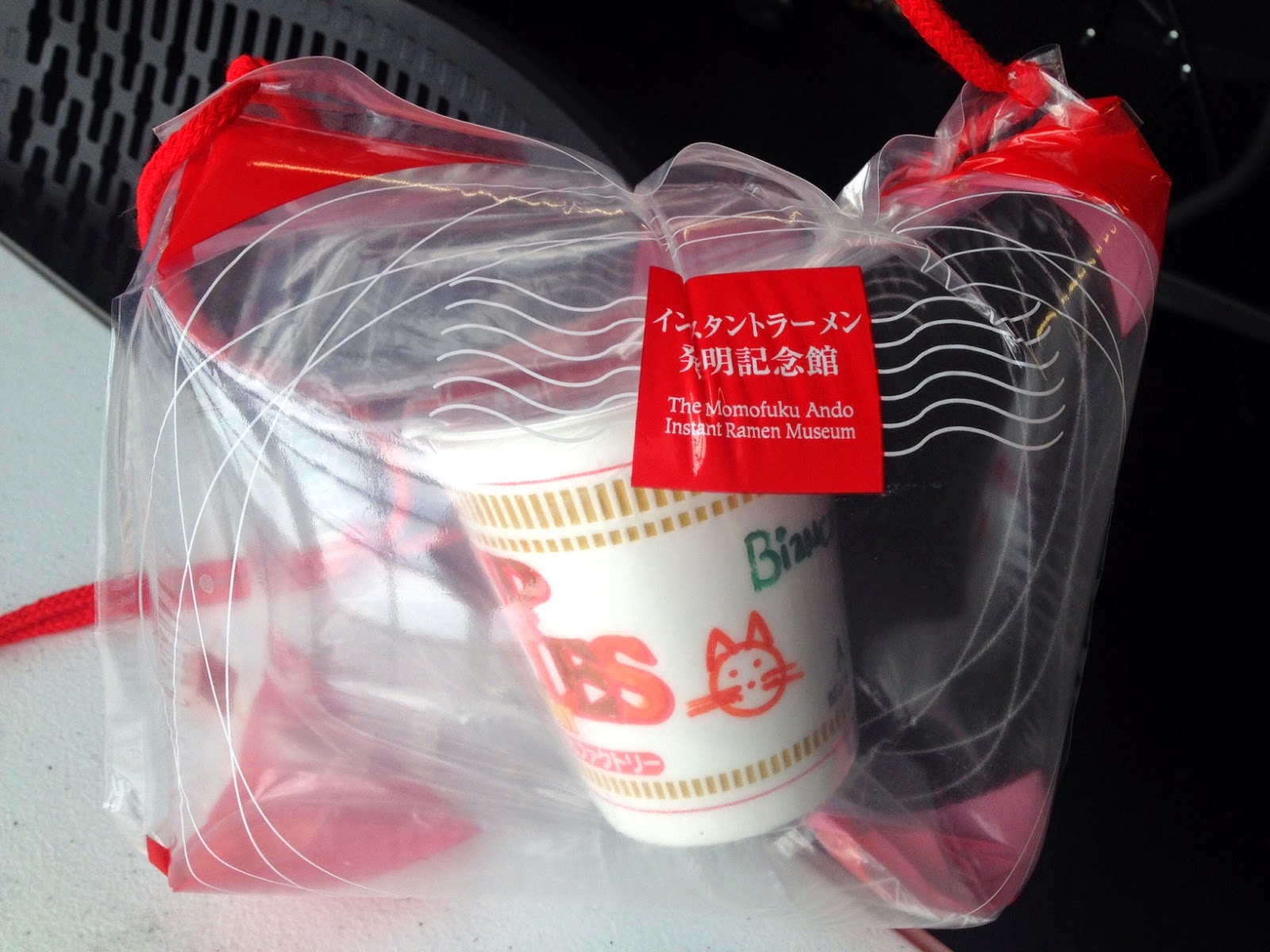 I kept the encapsulated noodle cup in my kitchen for a few weeks, just so I could look at it. But finally, this week, I decided to eat my noodles for lunch. My co-worker Michael helped me pop the bag with his pocket knife. Inside was my customized cup. 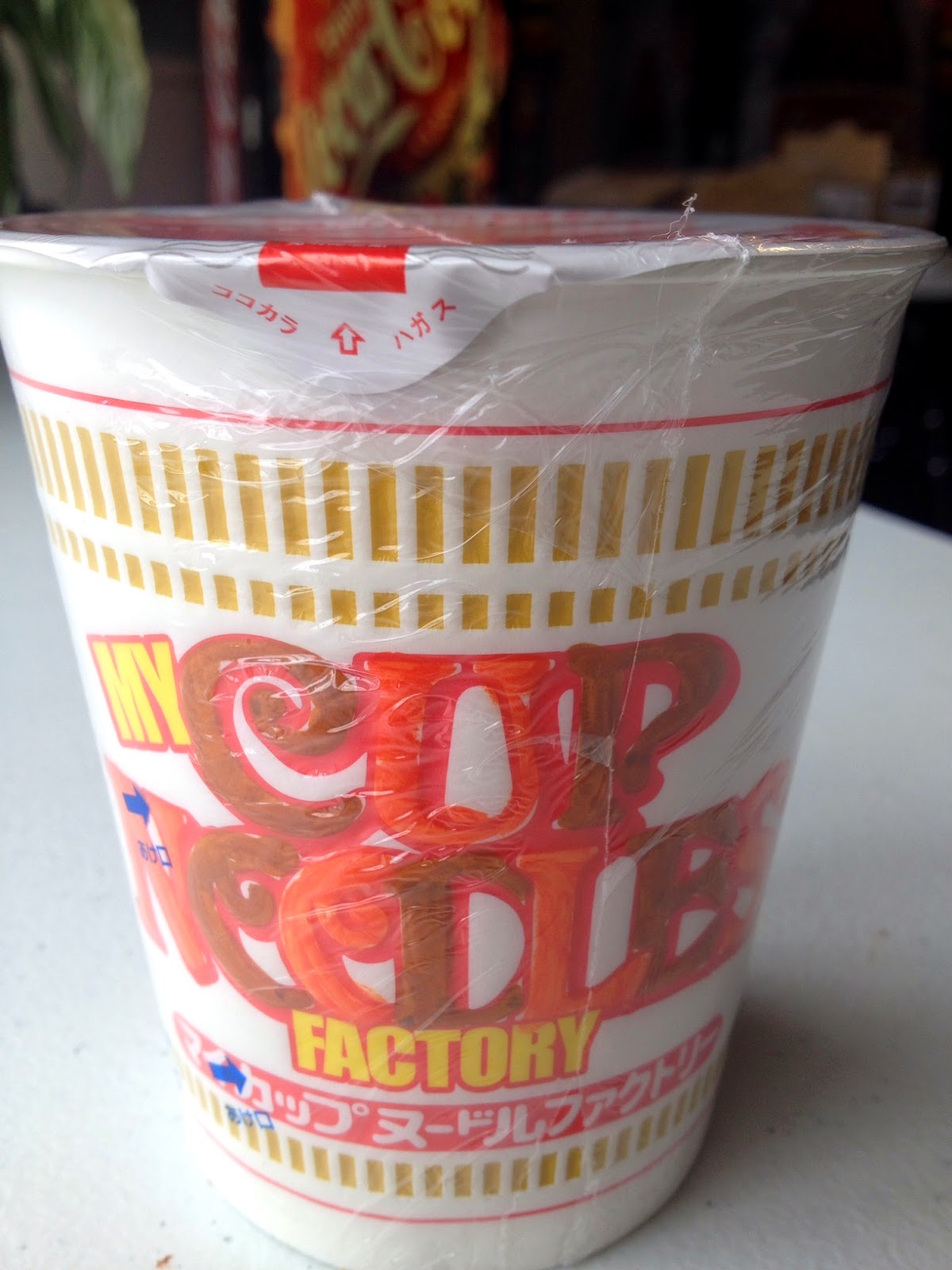 Cassi even wrote "Bianca' Cookin' Crunk Noodles" on the side. 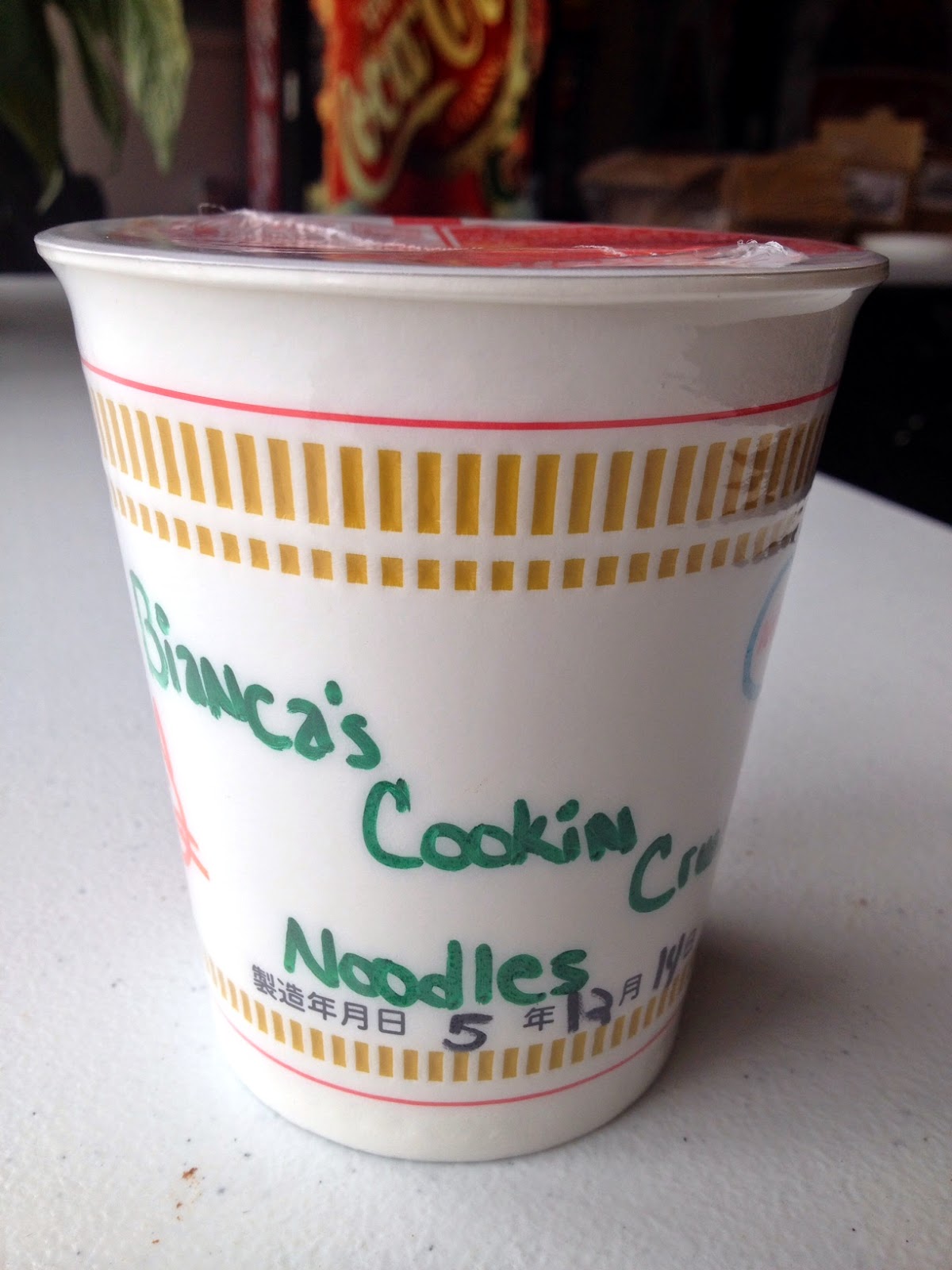 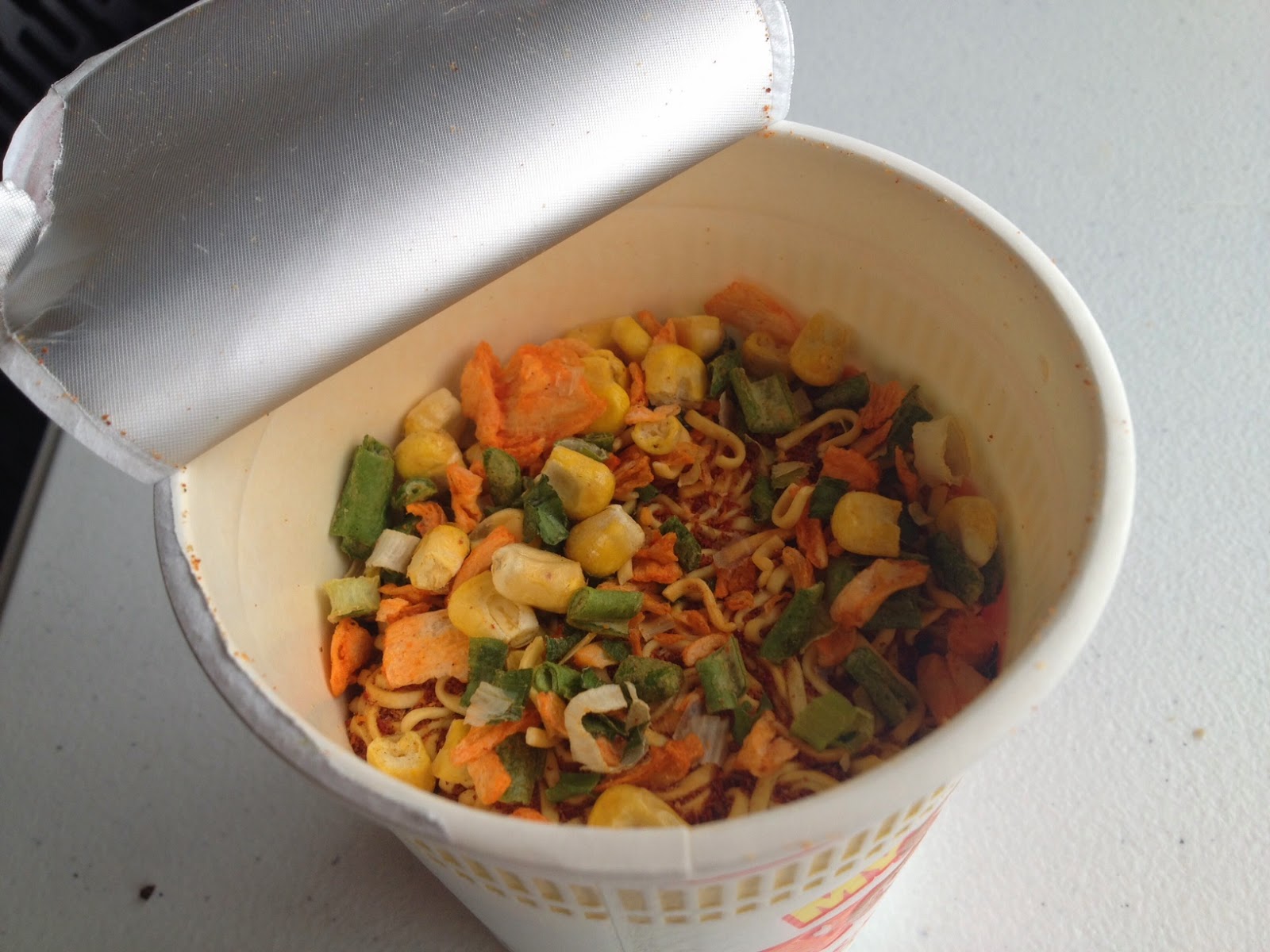 I boiled some water in the office microwave and poured into the cup. Then I patiently waited for the noodles to rehydrate. After a few minutes, I had this! 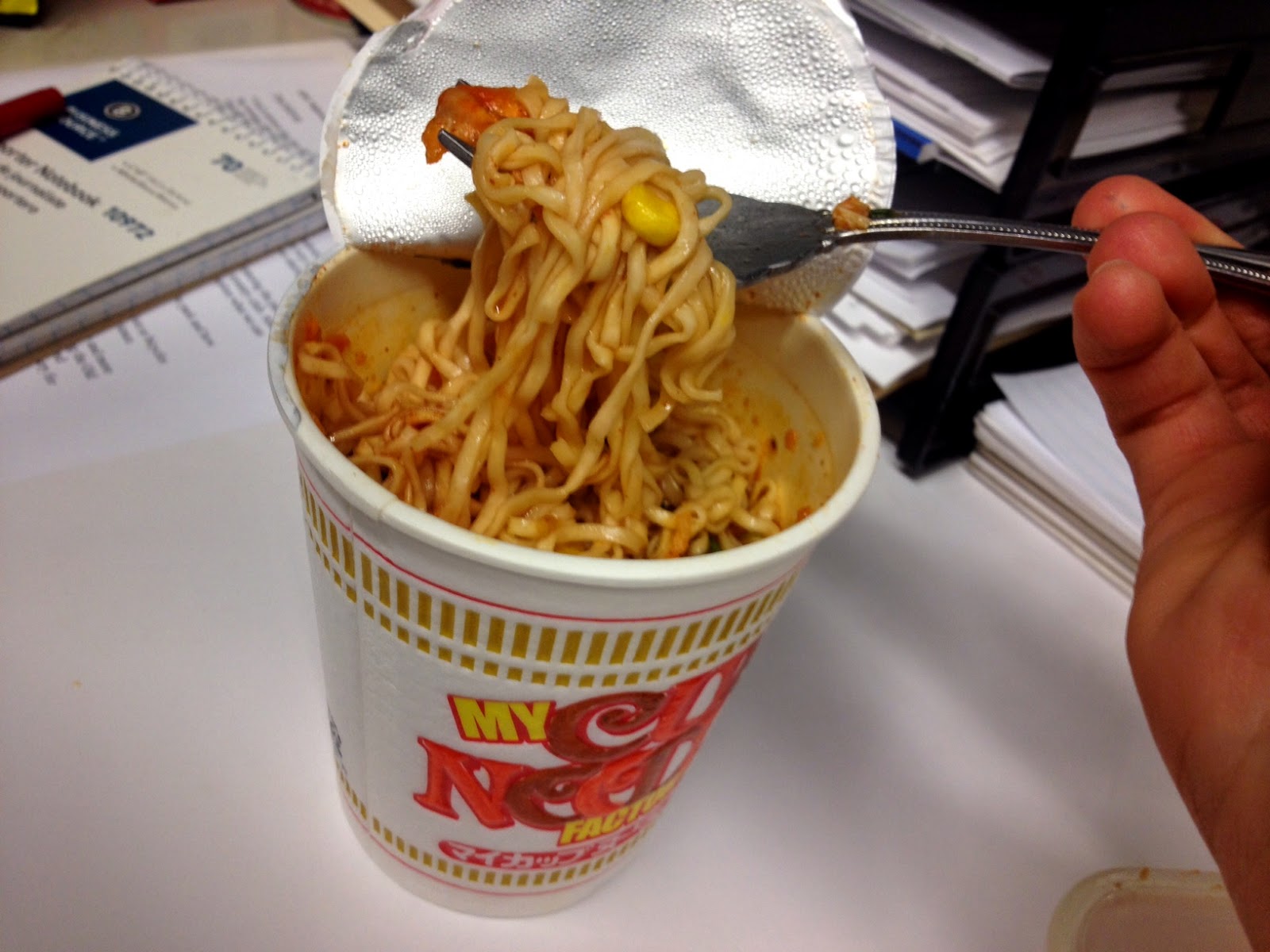 Oh. My. God. Best instant ramen I've ever had! Seriously. The tomato-y broth was so savory, and this had more veggies than your average cup o ramen. The corn rehydrated to taste just like fresh corn. And all the flavors combined to create the perfect cup of soup. I wish I could eat this all over again! Thanks Cassi!
Posted by Bianca at 9:27 PM

What a great original gift. Those ramens look absolutely delicious, much better than the usual types.

That looks awesome! What a great gift!!

Oh my gosh, I have to show this to my husband! We've thought about going to Japan sometime in the future, but this just got me even more excited in wanting to go!!