Y'all, you might have gathered this by reading this post's title, but I have a new favorite breakfast! It's from the Oh She Glows Cookbook, and it tops just about anything else in the world I can think of to eat for breakfast. Except maybe vegan yeasted doughnuts, but those don't count because I'm too lazy to make them and I can't buy them in a bakery here.

Plus, this Loaded Savory Oat & Lentil Bowl is way healthier than doughnuts anyway. 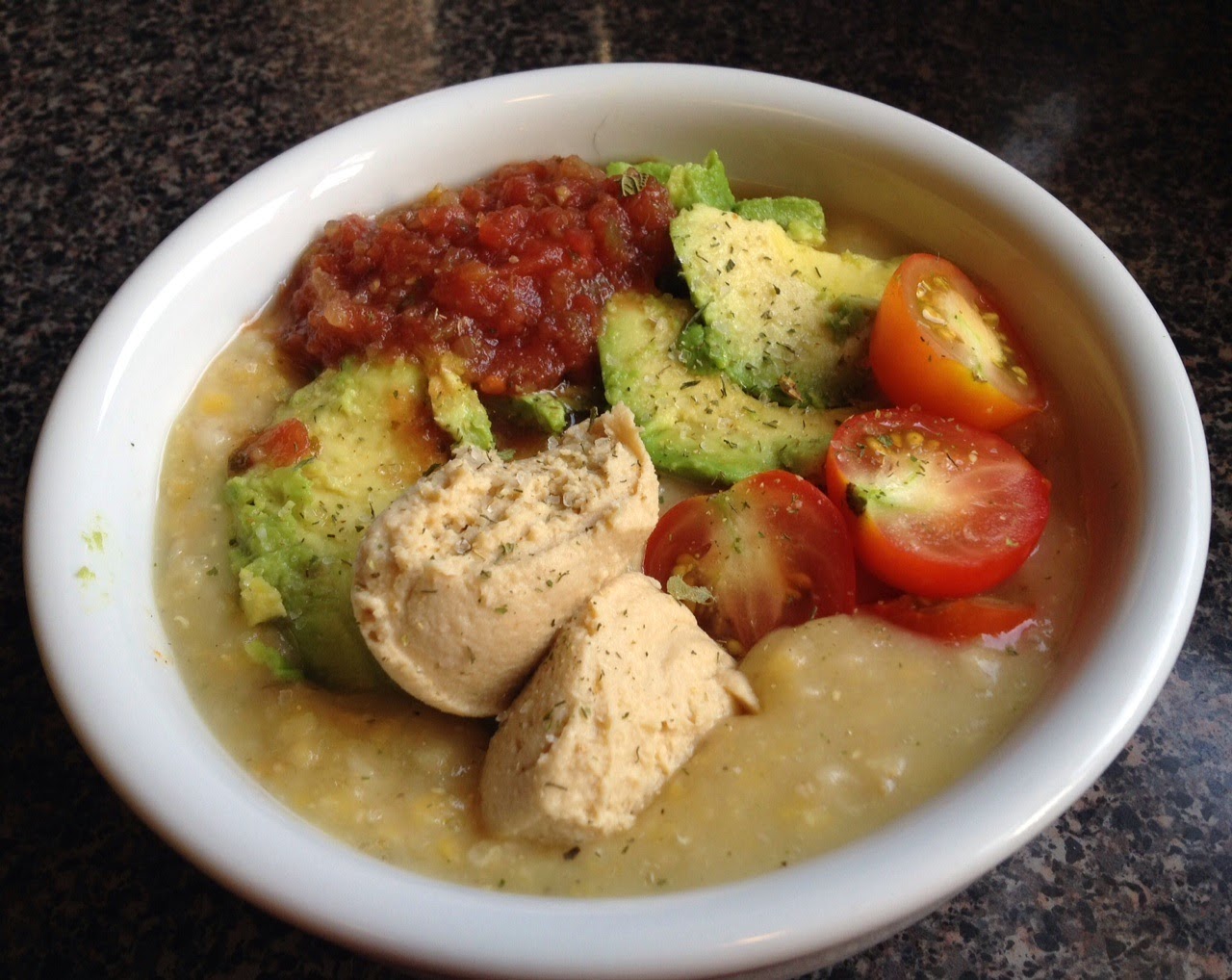 I generally prefer savory over sweet breakfasts (except for, you know, doughnuts), and I've long been a fan of savory oat bowls. Who wants oats with sugar and fruit when you can have oats with nooch and salt?

But I've never ever thought to make something as crazy awesome as this. Only Angela Liddon, author of the Oh She Glows blog and cookbook, could think of this. Red lentils and oats are cooked together into a creamy porridge.

And from there, the sky is the limit. You can load you bowl with whatever you want! But I followed the suggested add-ins in the book — avocado, hummus, salsa, and cherry tomatoes (grown in my own front yard garden). Is there really any better combo in the world? Yea, I didn't think so.

Also, that hummus is perhaps the best hummus in the world. It's the Oil-Free Hummus by Roots, an artisanal vegan hummus company from Asheville, North Carolina. They call themselves the "microbrew of hummus," and they're not kidding. This is craft hummus, seriously.

I will probably never make my own hummus again because I can get this stuff at Whole Foods and it's better than any homemade hummus I've made or tried. I bought oil-free hummus because I wanted the lowest-calorie hummus (40 cal per 2 Tbsp.) that Roots makes so I'd have an excuse to eat an entire half of an avocado in my bowl (I try to keep my breakfasts under 600 calories). Anyway, it's the first flavor of Roots hummus I've tried, but they have so many more flavors that I'll be experimenting with soon — Lima Bean, Chipotle, Spinach, Thai Coconut Curry!
Posted by Bianca at 10:44 PM

Yow, that hummus looks dense! almost like ice cream! Love that it stands up in a hot bowl like that. Some interesting sounding flavors too.
Lentils and oats first thing in the morning sounds like it will get things working... and also fill you up, basically forever.
I'm the other way around - typically a sweeter person in the morning but on weekends when I have more time I could totally get down with this.

�� Roots hummus is the best. I go for the oil free too because of the calorie savings, but have tried some of the other flavors which were just as good. Roots also makes a pretty good salsa. Thanks for the post.

I made this for breakfast Sunday and it was delicious. I substituted Teff for the oatmeal and lentils. I forgot the salsa,but everything else was the same.