And then for a morning snack, I had the Aztec Spirit from Crazy Sexy Kitchen. This is vegan chocolate milk drink that isn't quite as thick as a smoothie. But it's amazing. Almond milk, cacao powder, agave, vanilla, and spinach. I used maple-flavored agave for this, and it added a really special kick. And the recipe actually called for kale, but I bought a big ole bag of spinach for another recipe this week, so I wanted to make sure it all got used. Plus, I think spinach tastes better in green smoothies because it's not bitter. 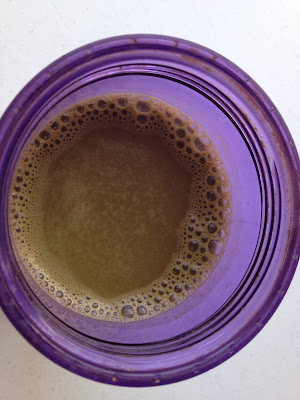 The recipe actually calls for strong coffee as well, but coffee isn't allowed on the CSD cleanse. The book, Crazy Sexy Kitchen, was written as more of an everyday book rather than just a cleanse book, so it contains a couple of recipes that stray from CSD Adventure Cleanse rules. But the coffee is optional, so I left that out. I'll have to make this again when I'm back on coffee though because I bet it'd be even better.

If you're wondering how I'm faring without the coffee, well, it's actually a breeze this time. In cleanses past, I spent a lot of time whining on this blog about not having my morning joe. But last year, on the Thrive Forward cleanse, I discovered that raw hot cacao has the same effect as coffee. So I've been having a mug of that every morning before work. This morning, though, I skipped the hot chocolate since cacao was in my Aztec Spirit.

My tummy was grumbling by 11 a.m., so I had a small handful of Soy Nuts. Roasted nuts aren't really allowed on the cleanse, but I think it's okay to have a bit. And soy nuts are very, very alkalizing. 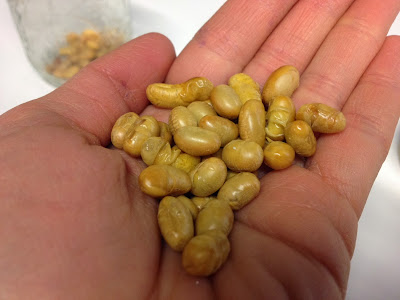 Lunch was the Nada Egg Curried Salad Wrap from Crazy Sexy Kitchen — a tofu "egg" salad made with homemade cashew aioli, carrots, parsley, cilantro, and spices served on a gluten-free tortilla with watercress. The brown rice tortilla is made by Food for Life, and I just love this. They're kinda chewy. I like chewy. 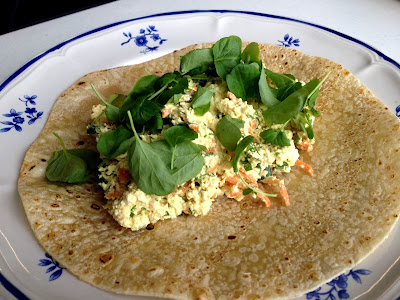 And a Side Salad with Currants and Carrots. 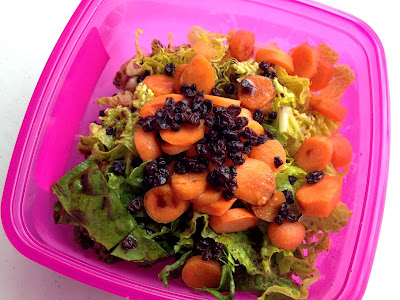 For my afternoon snack, I had a handful of Simple Truth Organic Trail Mix. This mix, which I found on manager's special at Kroger, is mostly dried fruits with a few raw almonds and walnuts and organic roasted peanuts. Peanuts also aren't recommended on the cleanse, but Kris Carr says if you do eat peanuts, they should be organic. After I ate this, I hit the gym for a quick workout on the stationary bike. 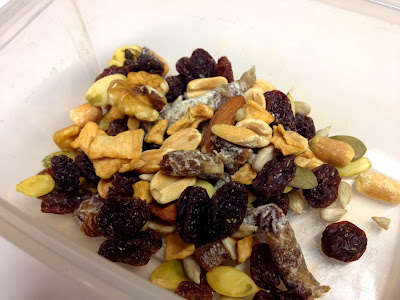 Dinner was the last of my Lentil & Chard Ragout with Millet. Finally! Loved this dish, but I've been eating it for days. Of course, I doused it in hot sauce. 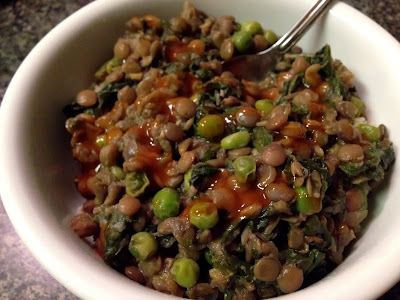 After dinner, Cassi and I trekked out to the brand-new Whole Foods store that opened today! For years, Memphis has survived with one measly little Whole Foods that used to be a Wild Oats store. But the new store is MASSIVE, like a real Whole Foods in a big city. We spent at least an hour and half in there, just roaming the aisles. And I may have had a tiny sample spoon of the Pineapple Basil sorbetto from the gelato bar even though sugar isn't allowed on the cleanse. But we have sorbetto at Whole Foods now! I had to try it.
Posted by Bianca at 10:58 PM

Love the Pineapple Basil Sorbetto! I'll have to try that Aztec Spirt it looks great! So does the nada egg salad. Yum!

what brand of tortilla is that? it looks good...and i have a hard time finding vegan/gf tortillas!

It's a Food for Life brand brown rice tortilla. They're really tasty! I updated the post to mention that. Thanks for asking!