Tired of my Vida Vegan Con posts yet? Too bad cause here's another! But it's the last, I promise. Tonight, I'll be sharing some pics from Saturday and Sunday, which were both full conference days filled with workshops and panels. But of course, we had time for crazy fun afterwards!

Saturday began with the VVC Portland Breakfast Showcase in the ballroom. Restaurants from across the city served up bite-sized menu items. Most were breakfasty foods (doughnuts, quiches, etc.). But of course, I had to go straight for the pizza and burgers table. Only in Portland can I eat pizza and burgers for breakfast and not feel a twinge of food guilt. 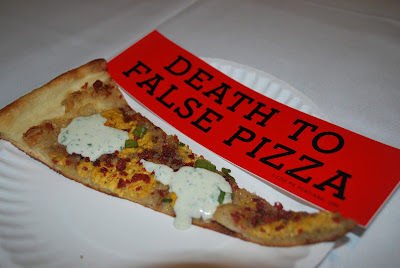 And I had some BBQ Jackfruit and Beet Burger Sliders from the White Owl Social Club's table. Yes, BBQ for breakfast. I'm a true Southern gal. 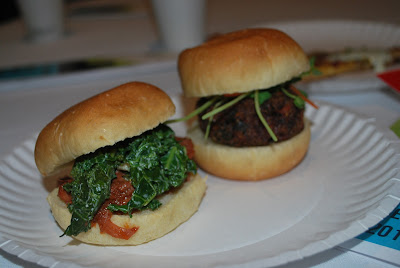 Everyone at my table was raving about these gluten-free Tofu Quiches from the Back to Eden Bakery table. Delicious! I couldn't even tell it was gluten-free. 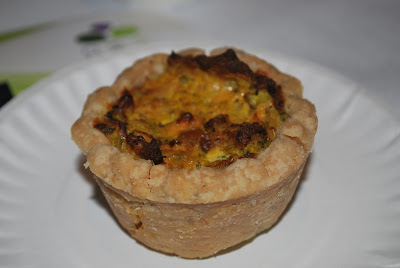 And even though I was stuffed, I found room for this sample-sized Tofu Scramble with Meatloaf and Cheezy Sauce from A.N.D. Cafe. 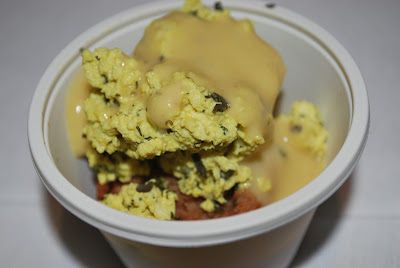 After all those carbs, I was happy to see the Portland Juice Press folks were offering juice samples for balance. 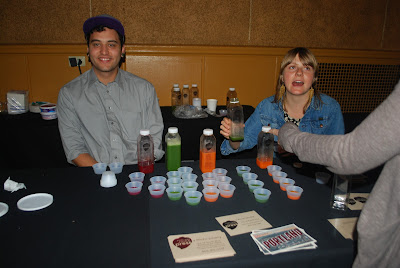 After breakfast, the panels began. I attended a great panel on Vegan Community Building. Jason Das from Vegan Drinks was on the panel (along with Maeve Conner, Laura Beck of Vegansaurus, and Leigh-Chantelle of Viva La Vegan), and his words inspired me to get a Memphis Vegan Drinks chapter started here. More on that soon! I'm planning the first meet-up for July. 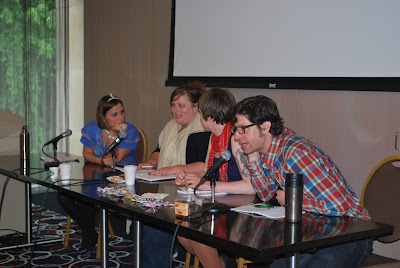 I didn't have any panels to speak on on Saturday, so I just hung out and attended lots of other peoples' very informative discussions.

Lunch was a Build-a-Bowl buffet! There were all sorts of goodies for bowl piling, and I think I managed to fit every one of them in this bowl — brown rice, quinoa, tempeh bacon, Upton's seitan, tofu, black beans, pinto beans, raw walnut meat, Galaxy vegan cheese, hummus, Nacheez, hemp seeds, lettuce, carrots, and garlic sauce. Oh, and Secret Aardvark habanero sauce and sriracha! 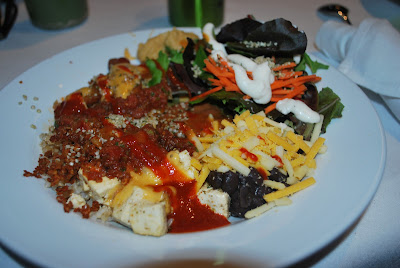 After lunch, Kittee Kake of Cake Maker to the Stars, Amey of Vegan Eats & Treats, and Mo of Mo Betta Vegan hosted the Vegan Battle Royale, a vegan trivia game show in which audience members were called to the stage to answer questions like, "What cookbook features Caulipots?" (hint: Appetite for Reduction) or challenges such as naming 15 blogs in a matter of seconds (The badass Ashlee Piper of The Little Foxes won that challenge, and Vegan Crunk was the last one she named!). There was also a blind taste test in which contestants had to guess ingredients in a mystery food. Isa Chandra Moskowitz won that one. 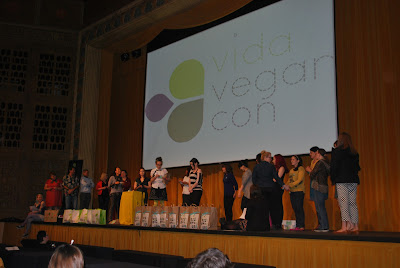 There were more workshops and panels after the Vegan Battle Royale. We had a short break between the conference and the Galarama, a fancy vegan gala to benefit the Chimp Sanctuary NW. It was held in a really rad venue with a model train track that spanned the inside and part of the outside of the building.

My friend Joel (whom I stayed with while I was in Portland) didn't attend the conference, but he did join me at the gala. Joel ordered beer, and I made a b-line for the samples of Miyoko's vegan cheeses. Miyoko Skinner wrote Artsian Vegan Cheese, and she's pretty much the world's greatest expert on vegan cheese. And she made these herself!! OMG! These were amazing! I wanted to eat this entire tray, but I had to be nice and share. 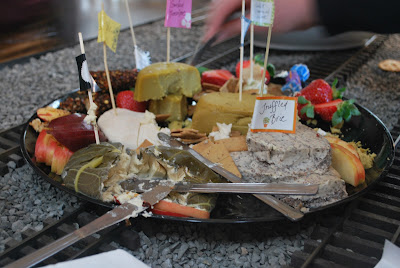 We had the local Bridgeport Summer Squeeze. Don't you love the tracks?! 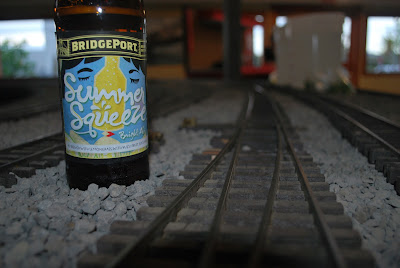 And there were Vegan Jello Shots! They didn't set properly, but that didn't stop us. 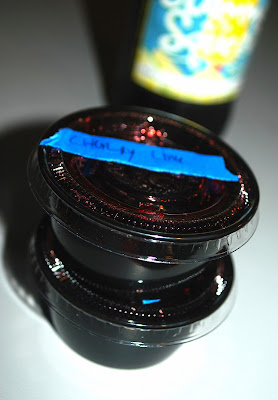 Outside the gala, a couple of food carts were selling dinner. There was a taco cart and a hot dog cart. Joel and I both chose the Tandem Treats hot dog cart because their logo was a two-headed rainbow unicorn. 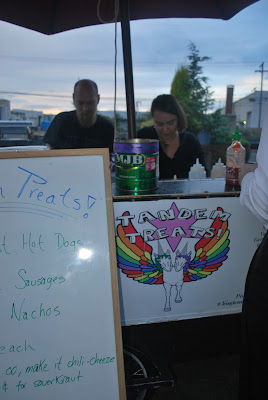 I got a Tofurky Hot Dog with Grilled Onions, Black Olives, Tomatoes, Spinach, and Jalapenos. Joel had the same but with a Tofurky Brat. 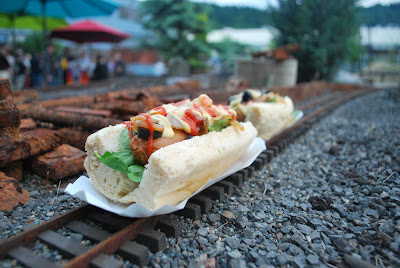 There was a silent auction at the gala to benefit the chimp rescue. And when I spotted these Viana Sunflower Spreads that I'd sampled (and fell in love with) at NOLA Veggie Fest a couple of weeks ago, I had to bid! And guess what? I won! $32 for 8 jars. 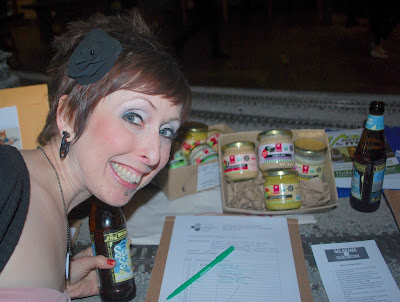 After the gala, a group of us decided to walk to the legendary Casa Diablo, Portland's vegan strip club. Yes, folks, a VEGAN STRIP CLUB! 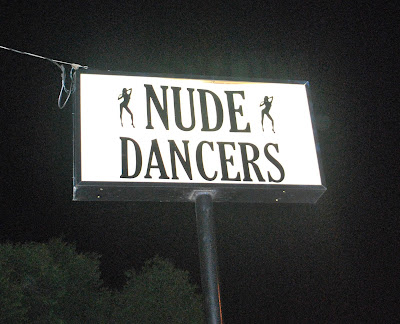 All of the food served there and all the booze is vegan. One person in our group had a White Russian! I had Taquitos! There's actually a far more interesting shot of these taquitos with a stripper's boobs in view, but it's probably not appropriate for my food blog. Use your imagination. 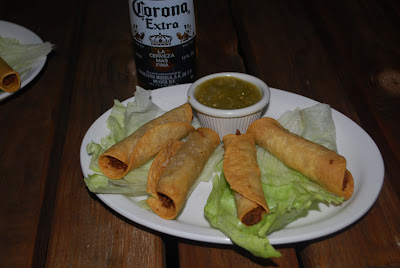 Whew! Saturday was crazy! But Sunday morning came quickly. We awoke to another breakfast buffet at the conference. This one was all about cold and hot cereals. I'm not a huge sweets-for-breakfast person, so I was afraid I wouldn't find much I was excited about eating here. But thankfully, there was nooch (should I have ever doubted that there wouldn't be?) and Secret Aardvark habanero sauce to make Savory Oats. And there were Breakfast Potatoes. I added some Chia Pudding for good measure. And some fruit cause why not? 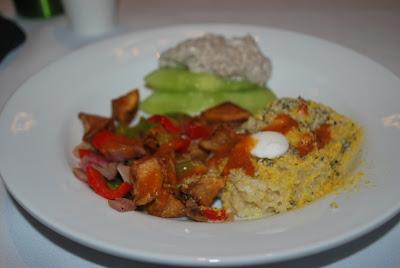 Lunch was another buffet, but this time it was all about building sandwiches! I made an Everything Sandwich with tofu, Upton's bacon, Tofurky slices, roasted veggies, hummus, greens, Nayo Whipped spread, and basically a little of everything on the buffet. 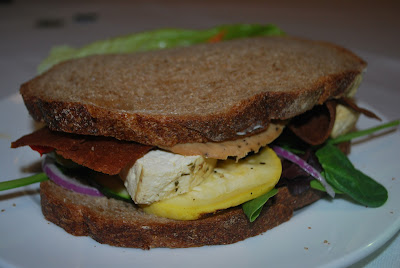 I also built a sort of Raw Taco using raw walnut meat, a romaine leaf, and some carrots. But then I made it un-raw by covering it in Nacheez spread. 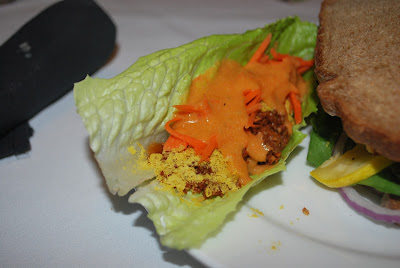 There were more panels after lunch, including one on Inter-dietary Cohabitation with me, Dawn of Vegan Moxie, and Joni Marie Newman of Just the Food. My partner Paul, whom I share space with, is an omnivore, so I talked about how we handle sticky situations, like dinner, fridge space, and separate pots and pans. I also had some great news to report during the panel — Paul has decided to go vegetarian until dinnertime every day. Not vegan, because he wants to eat Morningstar Farms black bean burgers for lunch. But still. Progress. Baby steps. It only took 8 1/2 years.

And then the conference was over. Sadness! We said our goodbyes and snapped the last pics (I'll be posting many of those on Facebook soon). Until next time, my friends.

But wait, that's not all! After the conference, my friend Joel and his friend Scott and his girlfriend took me to Multnomah Falls, just about 30 minutes outside of Portland. 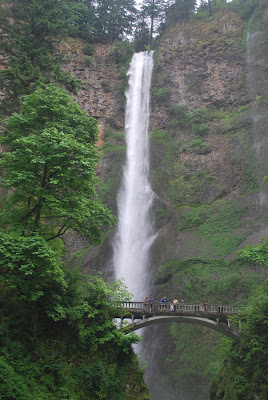 Wow! I've never seen a waterfall this amazing! It was lovely seeing some Northwest nature for a change instead of just stuffing my face (though I do really love stuffing my face).

After our waterfall journey, I met up with a few vegan blogger friends for one last meal at the appropriately named Bye and Bye (the same vegan bar where we ended out the conference in 2011). I had the Samurai Bowl (brown rice, nooch-covered tofu, slaw, miso-chili sauce, and avocado). 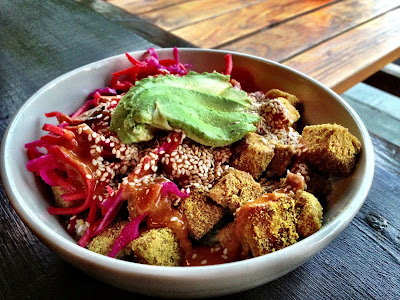 And of course, I couldn't end a trip to Portland without one more Vegan Bloody Mary! Sadly, I only had time for a couple of these because my flight left Monday morning at 6:55 a.m.! 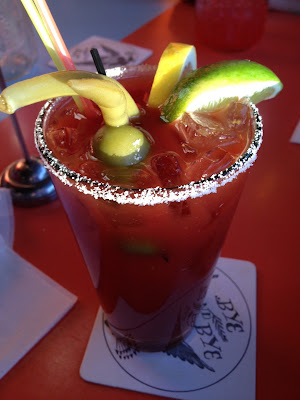 Cheers to my vegan blogger buds! I'll see y'all again next Vida Vegan Con (or hopefully sooner!).
Posted by Bianca at 10:59 PM

I loved your VVC recaps!! I moved to Portland this year and wished I could have attended, but I'm not a food blogger and didn't have the scratch. I am glad you got to so many great spots in town. Isn't that beet burger, and the mac and cheese patty, from White Owl to die for? Portland food is amazing!!

Oh and PS I am dying to check out Casa Diablo... I've never been to a *real* strip club, and I mostly want to eat, but it sounds like an experience. : )

I absolutely LOVED that Meatloaf Benedict. But I loved seeing you even more!

That cheese plate looks fantastic. I wouldn't want to share it either. Looks like you had an amazing weekend!

So nice meeting you! Great recaps too! I got to see that same waterfall and thought the same thing - how amazing!

And for the record, the Chimichanga at Casa Diablo was great too! ;)

I run Vegan Drinks here in Dallas, let me know if you want to discuss any of my experience with that. We do it a little differently than they do in NYC, but the gist is the same.

I never did snag one of those mini quiches at breakfast on Saturday!

Your food recaps are so detailed. I just shoveled stuff in to my mouth! Especially love the sausages on the train tracks. Choo chooooo chomp!

The only thing missing from this post is you and me getting silly drunk. Next time, my friend.

I'm so sold on Prtland. I want to go RIGHT NOW! Love these recaps :)

dam how didja eat all that?

so much delicious food! my my my!

Nooooo never stop posting! Once we all stop posting our recaps, it will REALLY be over! Noooooo!

P.S. I was totally the opposite to you on Saturday morning. I was all SWEET SWEETS TAKE ME TO THE SWEET BAKED/FRIED GOODS FOR BREAKFAST>

P.P.S. Really enjoying your panel on becoming a cookbook author! :)

Bianca, first off, I loved reading your recaps on VVC as well as your blog in general...

As an aspiring vegan with few vegetarian/vegan friends (actually, I can only think of one), I wanted to say that 1) I *love* the idea of Vegan Drinks... it would be SO incredibly great to find a like-minded community in the heart of the mid south/BBQ central. And 2) I would have loved to hear the panel you spoke on, "Interdietary Cohabitation", as I haven't been able to find much on the subject. Most of the vegan resources/role models I have found out there on the internet are surrounded by or co-exist with fellow vegans, and my husband, who helps makes me into a stronger, better person and who I adore, is an omnivore. Therefore, diet, specifically transitioning into a vegan one, presents more of a challenge for us.

So, sorry for the epic comment, but I wanted to throw in my vote for "Vegan Drinks" here in Memphis and to say that I'm glad to hear that interdietary cohabitation is indeed something that people do successfully.

Thanks for the awesome blog, I'm done. Amen :)