I'm back from Vegan Mecca, a.k.a. Portland! And boy is my belly full. I spent the last several days eating my way through Portland and hanging with tons of other vegan food bloggers at the second bi-annual Vida Vegan Con blogger's convention.

Here's Joel and I shortly after my flight landed on Wednesday afternoon. Ready for adventure! 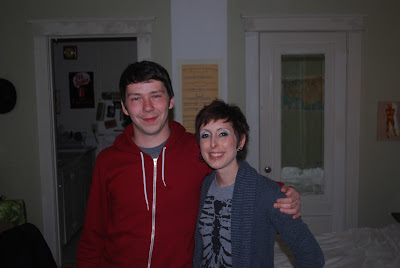 Joel, his friend Scott, and I set out on foot from his apartment in Northwest in search of a pre-dinner snack. I found the iconic Portland sign that's featured in the opening credits of Portlandia! 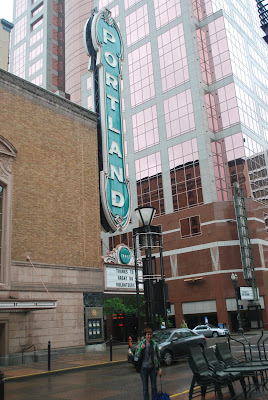 We had no destination in mind, so long as what we found was vegan. And guess what? We stumbled onto one of the places on my must-try-while-in-Portland list — Veggie Grill! 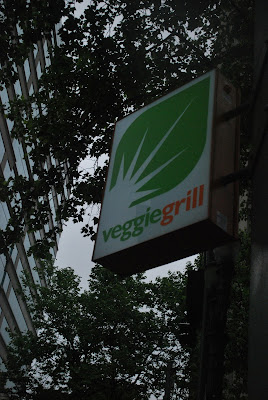 Since it was happy hour, we ordered the Wings and PBR special — Buffalo Wings and a tall-boy can of Papst for $4.95. 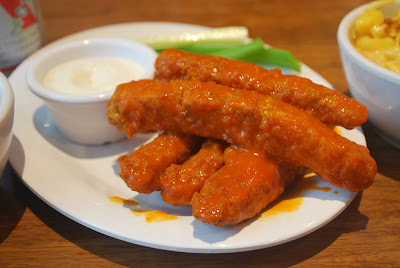 And we also ordered some of Veggie Grill's legendary Mac & Cheese to split (best mac in the world, y'all!). 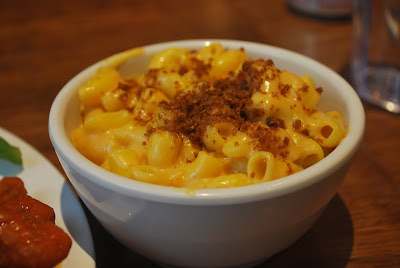 And we also ordered the Cauliflower Mashed Potatoes with Gravy to split. This stuff bears a striking taste resemblance to KFC mashed taters and gravy! 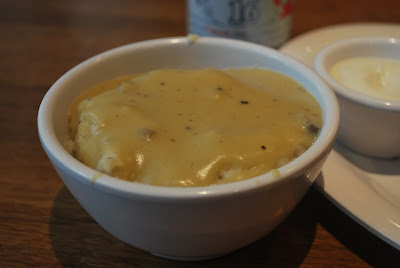 After our snack, we wandered around and did some shopping at thrift shops and the famous Powell's City of Books. We made 7 p.m. dinner plans for Blossoming Lotus with some more of Joel's friends. After our heavy snack, I didn't think I'd be hungry. But we quickly burned off the wings and taters while shopping.

At 7 p.m., we arrived at Blossoming Lotus, a fancy sit-down all-vegan restaurant. And it seemed that many other early conference attendees had the same idea. I ran into Leigh-Chantelle from Viva La Vegan, vegan cookbook goddess Isa Chandra Moskowitz, and John McDevitt from The Laziest Vegans in the World.

After a very long wait for a table, we started dinner with a bottle of August Cellars wine, a local vegan red. 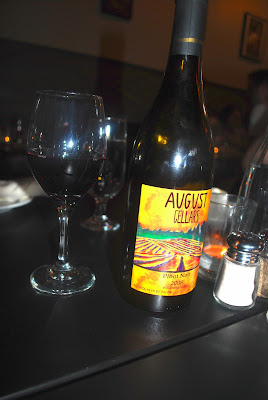 For starters, we ordered the Live Nachos — flax crackers with raw nacho cheese and raw sour cream. So good! 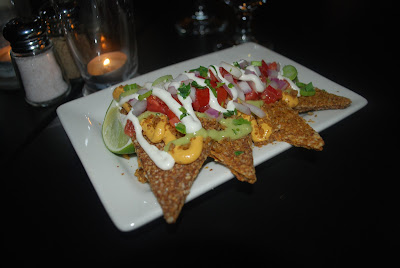 And we also ordered the Live Cheese Plate — three raw cheeses (apricot chevre, cheddar, and pepper jack) with raw crackers and fruit. The chevre was my very fave! 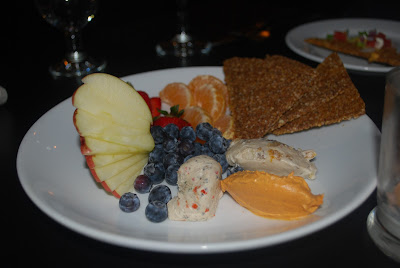 For my entree, I couldn't resist the Southern BBQ Plate. You can take the girl out the South, but you can't take the South out the girl, right? This was amazing! BBQ Soy Curls, Mac & Cheese, Buttered Cornbread, Black-Eyed Peas, and Kale. 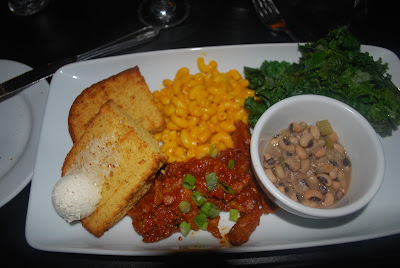 After dinner, Joel and I went to Ground Kontrol, a rad video arcade and bar with vegan bar food! Unfortunately, I was too full to sample the vegan pizza and corn dogs there. But we drank local beer, and I kicked Joel's ass at Mortal Kombat. 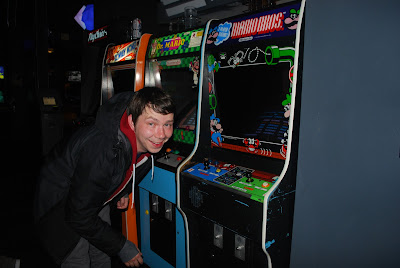 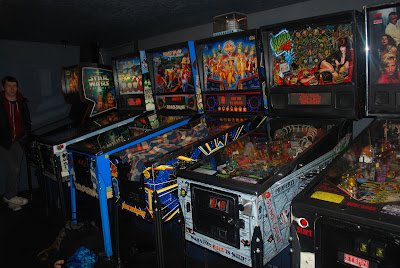 We also ran into my old pal Jack from Memphis at Ground Kontrol. He moved to Portland six years ago. We all played some pinball together.

After the arcade, I just HAD to get a box of vegan doughnuts from Voodoo Doughnuts. Last VVC, I only sampled two doughnuts, and that made me sad. So this time, I ordered a dozen!!! All for me (because Joel doesn't like doughnuts). 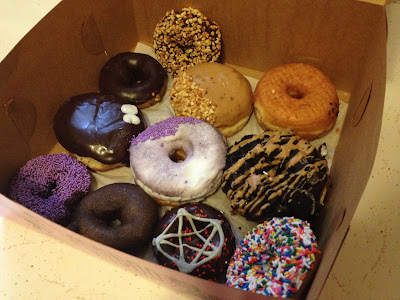 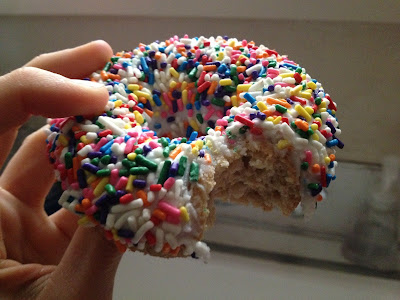 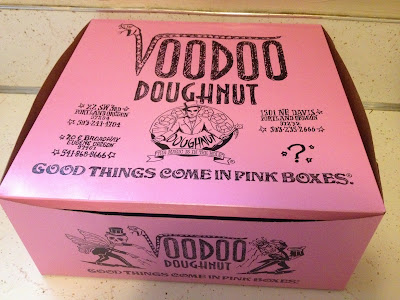 I intended to eat several doughnuts every day while I was in town. But I have to admit that I left Portland with 4 or 5 doughnuts untouched in the box. A girl can only eat so many doughnuts. I gave it my best try!

The next day — Thursday — was mostly open until the afternoon, when the unofficial Vida Vegan Con meet 'n' greet was scheduled to happen at the White Owl Social Club. Joel and I spent the morning exploring Portland a little more before I'd be super busy with con stuff.

We ended up at Hungry Tiger Too —home of the world's best vegan corn dog — for lunch. 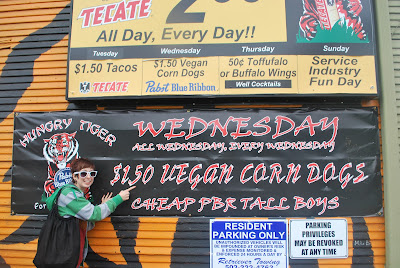 I ordered the Vegan Corndog (because I'd been dying to try it for years!), but I subbed out the fries that come with it for Coleslaw. I knew the weekend would be all about eating vegan junk food, and I figured it was best to get some veggies in early. 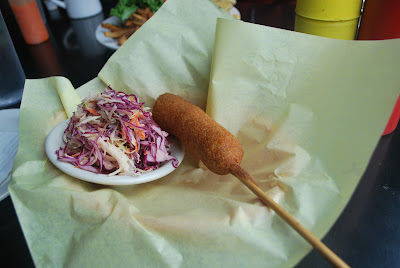 This corndog BLEW MY MIND! I've had vegan corndogs, of course. But nothing can top this one. The batter was crispy, greasy, and slightly sweet. 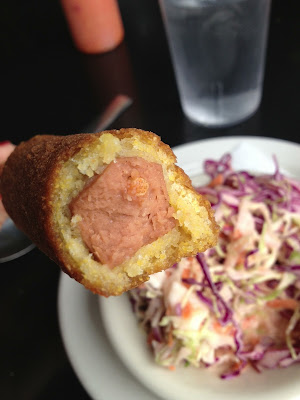 Joel ordered the Cougar Club, a massive sandwich with fried tofu, tempeh, vegan cheese sauce, and jalapenos. I took a bite, and it was so good! 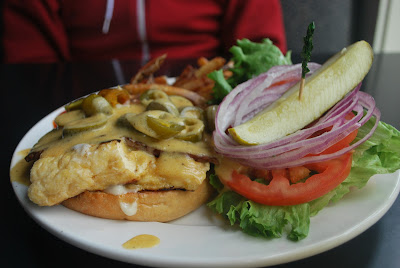 After lunch, we walked to Portland's famous Vegan Mini Mall! It's a strip mall with Food Fight (a vegan grocery), Herbivore (a vegan clothing company), Sweetpea (a vegan bakery), and Scapegoat (a vegan tattoo shop).

Look what I found inside Herbivore! My book! They asked me to sign these copies! 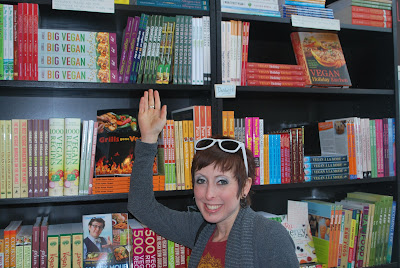 Oh, man! I'm bummed that I never got around to trying the vegan corn dog. There were just too many things to see and sample! All the more reason to go back!

I'm so glad that I finally got to meet you in person! It would have been cool to hang out more, but the weekend passed by in a flash. Looking forward to the next one already! :)

YUMMMMM!!! So jealous of all of the awesome food and Joel-hangout-time!!! I wish I could have gone! Looking forward to hearing about the rest of it!!

Clearly I need to make it to Portland one of these days. I'm drooling over that corn dog.

I'm totally kicking myself for not going this year. I missed out on so much! :( Veggie Grill is a big chain here in LA and I love the buffalo wings, so I'm glad you got a chance to try them.

Looks like you had a great time! Pdx realy is the vegan capitale du monde!

Oh man. Totally eating vicariously through your post...which is problematic because now I'm MORE hungry. Ha. Portland has way too much good stuff, I have also (shamefully) left behind Voodoo donuts in the past. A girl can only stuff her face so much.

man oh man, your food pics are freakin' awesome! looks like you had loads of fun and ate a million pounds of foods!

That pic of the corndog is making me drool! Even though it gave me gastro-issues (on top of all the other foods endured that day!), I still want more! OM NOM.

Voodoo Doughnuts was so good!

you did Portland proud - glad you got to see so much of the Vegan Awesomeness (Ground Kontrol and those corn dogs!), wish we had more time to just sit and chat!

Very fun blog entry! (I see a lot of what I did while in Portland last week as well, and just had a Voodoo glazed donut for my post-workout "meal"!)

Oh my gosh, your photos combined with my memories make shake my head in confusion as to WHY DON'T WE ALL LIVE IN PORTLAND ALWAYS?!

Also, I wish I'd worked up the courage to say hi to you! I really enjoyed your Path to Cookbook Author panel :)

You and I ate similar things while in Portland :-). I think I saw the back of your head during one session, but never got a chance to introduce myself. So many things happening that weekend and it went by so quickly! There's always next year!