Last Friday was National Bike to Work Day, and even though it was gloomy and drizzly on Friday in Memphis, my co-worker Mark Plumlee and I rode bikes to work anyway. We participate in Bike to Work Day every year.

The ride from my Crosstown house to my downtown office takes about 45 minutes, and there are bike lanes for much of the drive. Memphis has become incredibly bike-friendly over the last two years with 55-plus miles of bike lanes added across the city. A few years ago, folks around here didn't know what a bike lane was!

Not only has Memphis grown more bike-friendly, it's also become way more vegan-friendly (as I'm sure you can tell in my Bluff City Vegan Eats series posts). Portland of the South? Not quite yet. I'd give that distinction to Atlanta or Austin. But we're getting there for sure. Case in point: the Hunger Monkey food truck. 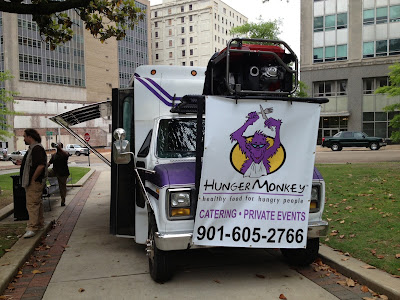 Every year, there's a little Bike to Work Day festival at lunch time in Court Square. Typically, there's live music and food trucks and lots of cyclists hanging out. But since it's rained, hardly anyone showed up at this year's fest. Mark and I were there though. And so was Dawn Vinson, Bike to Work Day's Memphis organizer (who also happens to be vegan!). And guess who else was there? A vegan-friendly food truck!

Hunger Monkey is a new truck. It's only been on the streets for a few weeks, but I'd read about it on the Hungry Memphis blog. They serve meat, but they have plenty of vegan options. There's a vegan pasta dish, hummus and pita, and all the veggie sides are vegan. You can make a plate of four sides for $8. So that's what I did. 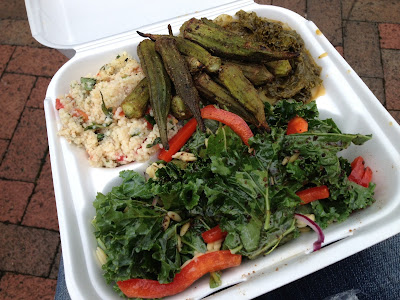 There's Couscous with Tomatoes and Basil, Roasted Okra, Cooked Collards and Kale, and a Kale and Orzo Salad.

The roasted okra was AMAZING! As much as I adore fried okra, I have to admit that I think I love roasted okra more (here's my recipe). These guys season theirs with a spicy Cajun-like seasoning. So good.

The kale and orzo salad was also amazing. The raw kale was massaged, and I liked how there were more veggies than grains. And the couscous was fantastic (but I did have to add some extra salt). The cooked greens, which are buried under the okra in this picture, were really tasty too. They were slow-cooked, Southern-style greens, and there were little mushrooms chopped up in there.

With a good 30-minute bike ride home ahead of me, it was nice to fuel up on fresh veggies rather than something fake meaty or fried (my usual go-to dining out fare).

If you're in Memphis and you'd like to find where Hunger Monkey will be parked next, check their Facebook page.
Posted by Bianca at 9:42 PM

Whoa! That all looks fantastic! Who would have guessed that you could get that much healthy, nutrient-dense food from a food cart! Plus, it all looks so tempting!

Glad you all were able to ride to work AND get some food truck action!