I run every Tuesday, Thursday, and Saturday morning (weather permitting, of course). And ever since completing the Thrive Forward cleanse in January, I've been consuming a protein smoothie about 30 minutes after my run. That's because I read all about eating the proper foods to boost recovery time while I was doing that cleanse, and protein helps rebuild muscle.

Before that cleanse, I ran often. But I never paid attention to what I was eating afterward. Since then, I've been able to tell a difference in my recovery time between runs. Plus, smoothies just seem easier to digest after a hard workout. And smoothies made with protein powders are filling for hours.

But sadly, many protein powders taste like butt. I don't care how many awesome superfoods a powder contains, if it tastes like ass, I'm not drinking it. I've sampled a ton of protein powders and, hands down, my favorite by a long shot has been Vega. Love the flavors (vanilla chai, anyone?) and the fact that it's stevia-sweetened (Healthy dessert for breakfast? Yes, please). 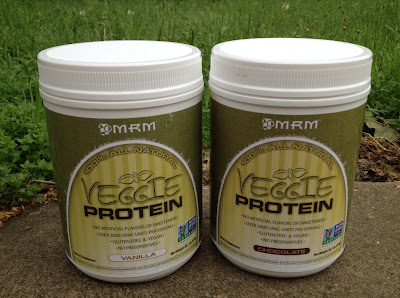 Well, guess what? I was wrong! This stuff is right there on par with Vega. I hate to compare one vegan product to another in a review, but quite frankly, Vega has been so high above any other powder in my mind, that's the only bar I have to compare with. And Veggie Protein holds its own! Both the vanilla and the chocolate flavors are sweetened with stevia and xyiltol, and they both taste like dessert. I would even venture to say that I might like the chocolate Veggie Protein better than chocolate Vega One. The vanilla is great too, but Vega may have them beat by a hair with its French Vanilla Vega One.

How does it stack up nutritionally? Veggie Protein has more protein than Vega One (22 grams versus 15-16 grams). Vega One has WAY more Omega-3's, but Veggie Protein contains Omega 3's, 6's, and 9's. They both have some other fancy fruit and veggie extras — grape seed extract, spinach, etc. Vega One seems to have a lot more supplements and extras.

But for a protein powder, Veggie Protein has you covered. Lots of protein. Good taste.

I made some fun smoothies with each flavor. Using the vanilla flavor, I made this Strawberry-Vanilla Smoothie: 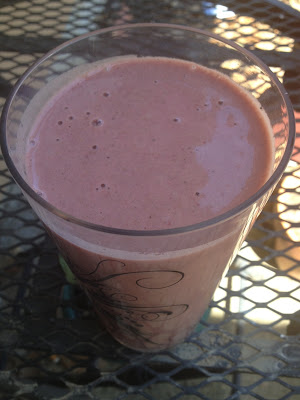 That's one cup of unsweetened almond milk, 3/4 cup frozen strawberries, half a frozen banana, and one scoop of Veggie Protein Vanilla.

And I made this Chocolate Peanut Butter Banana Smoothie with the chocolate flavor: 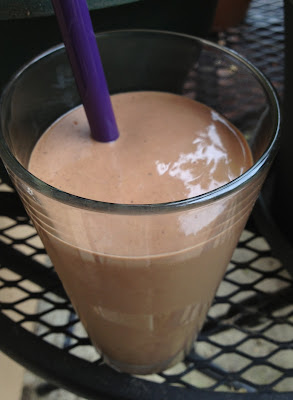 That's one cup of unsweetened almond milk, one frozen banana, 2 tablespoons of PB2 (but regular peanut butter would work too), and one scoop of Veggie Protein Chocolate.

Both smoothies were delicious! And the chocolate PB banana one was especially thick and creamy, almost like a milkshake. So all this is to say, Veggie Protein is damn good. I'm happy to add this to my thrice-weekly smoothie powder options.
Posted by Bianca at 10:31 PM

oh wow! i definitely want to try this! i love vega one so much, too, but it's so pricy. this looks like a good alternative.

Nice! I typically use hemp or just add peanut butter for post workout, vegan smoothies! Will definitely be trying this..

Oh! I will have to try that. I think that the olympia labs pea protein is pretty tasty, as well as the plant fusion powders. Vega was my first love, but it's more than protein, and on a "low carb" diet, it's a bit too high in carbs. I will have to check this one out.

I'm impressed with how smooth it looks! Some powders are chalky and chunky.

actually looks quite tasty! i've been contemplating adding a protein drink to my diet...perhaps I'll give this one a go! thanks for the review!

Your comments made me last. I'm a long distance runner and I try to have a recovery shake after longish (12-mile +) runs. But amen sistah on the "tastes like ass." Ugh. Honestly, I love the folks at Vega but I was not crazy about their powders wither. So I am curious about these.

Hope you're doing well, cuteness. I am finally coming out from "under" and am trying to be part of the blogosphere more regularly. [Damn day job!)

Thanks for the tip! I just ordered one of each and was excited to see that they are offering 30% off right now, too. I hope they do a better job with their labels than Epic Protein. You have to get out a magnifying glass to read Epic Protein's labels. It's ridiculous!