As much as I love to cook, I also adore convenience foods, especially when they're made from all-natural ingredients. Meals made from boxes and bags take me back to childhood summers, when I considered TV dinners to be a luxury reserved for those precious few weeks when school was out and mom and dad had to work. Having the house to myself and getting to eat food from the microwave was glorious!

But I don't even want to think about what sorts of crazy processed wonders were contained in those tv dinners of my youth. Remember Kid Cuisines? Lived off of those during the summer. Anyway, these days my convenience meals are much healthier. I love Amy's frozen meals and Tasty Bite microwavable pouches. A few weeks ago, Tasty Bite sent me a box of several meals to review. While I'd already tried (and loved) a few of these, some were new to me. 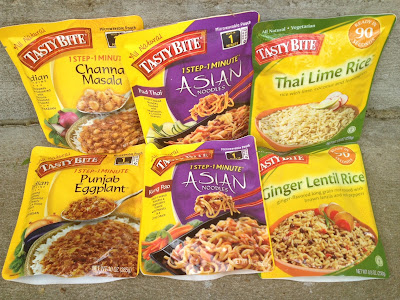 First I tried the Thai Lime Rice as a side dish to some Beyond Meat Thai Chicken Salad from the Whole Foods deli. I used romaine hearts as little raw burrito shells to scoop up the salad and rice. 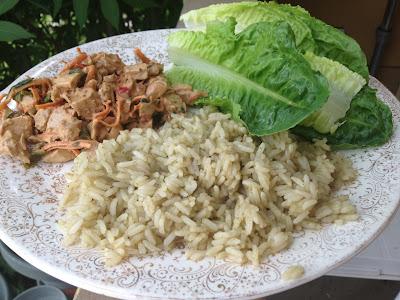 I was immediately struck by the tenderness of this rice. You'd think something from a bag that takes 90 seconds to warm in the microwave wouldn't have a perfect texture. But on the contrary, this rice had a better texture than rice I make from scratch. It was delicately seasoned with lime, coconut, and lemongrass. And every ingredient in the ingredient list was something real — water, rice, coconut milk, sunflower oil, raw sugar, kaffir lime, the list goes on, and nothing is unpronouncable.

I brought the Kung Pao Asian Noodles to work. 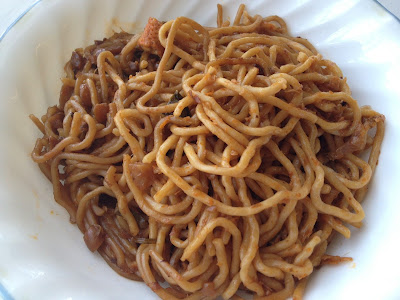 These were also perfect in texture. It's crazy how pasta and rice in a bag can be so amazing. The noodles were spicy, and the Tasty Bite folks were quite generous with the peanuts that flecked the dish. Although it didn't look like much food in the bag, this was actually really filling. It said it made two servings, but it was really enough for one healthy serving.

Next up was the Punjab Eggplant with the Ginger Lentil Rice. 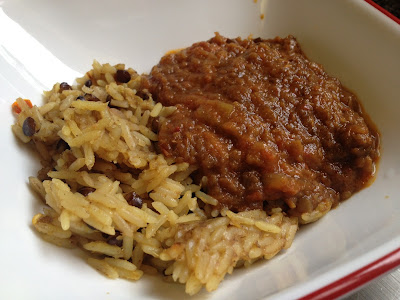 I'd had the eggplant dish before, and it's one of my favorite Tasty Bite entrees. Spicy, tomato-y, onion-y goodness. And dare I say better than some similar dishes that I've had at Indian restaurants. It was a perfect complement to the Ginger Lentil Rice, which was made with long-grain rice tossed with brown lentils and red peppers.

I had the Channa Masala over some leftover brown rice. The chickpeas were perfectly textured, and the sauce had a complex coriander and ginger flavor that could rival many homemade channa masala dishes. 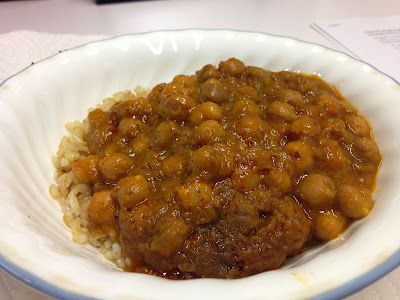 Finally, I tried the Pad Thai Asian Noodles in the most unusual of circumstances. A few weekends ago, when I was at the Memphis in May Beale Street Music Festival, I wasn't sure if I'd be able to find vegan food in the park. So I packed an emergency bag with some energy bars and easy-to-eat snacks. Just in case I needed a heavier meal, I packed my Tasty Bite Pad Thai Noodles.

Although I did end up finding some delicious vegan tacos there, there was one night of the fest that I got hungry for a late-night snack. So I whipped out my Pad Thai Noodles and ate them cold, straight from the pack. They were so good that I had to make crazy eyes! 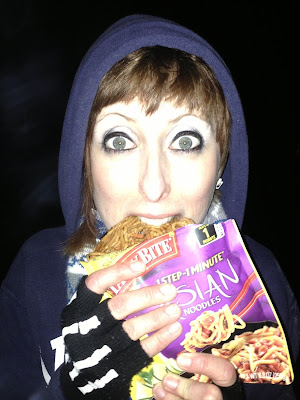 Since the noodles are pressed into a square before cooking, you can almost eat them like a candy bar when you're on the go. And cold Asian noodles dishes are always a winner! These hit the spot! You could even take these camping or hiking!
Posted by Bianca at 10:48 PM

I am ALWAYS looking for food to take backpacking that is some what nutritious and easy to pack in, and these look perfect!

BIANCA!!! We gotta have these for VVC. Late night drankin' food. :)

PS - Trinityp333: Tasty Bite is the bomb, and they sell some at Trader Joe's (which are labeled TJ brand and not all are vegan because of the ghee, so beware). But they're a bit cheaper at TJ's, like $2 a pack. You can also get them on the cheap at World Market.

hahah that last pic is so funny! I love that you ate them cold, that is TOTALLY something I would do! I used to eat cold eggo waffles straight from the freezer as a kid...:D

I just bought the Thai lime rice from Food Fight - good to know it's good! (I also have my eye on the Channa Masala and the pad Thai... guess I will have to try them all!).


We bumped into your blog and we really liked it - great recipes YUM YUM.
We would like to add it to the Petitchef.com.

We would be delighted if you could add your blog to Petitchef so that our users can, as us,
enjoy your recipes.

Petitchef is a french based Cooking recipes Portal. Several hundred Blogs are already members
and benefit from their exposure on Petitchef.com.

To add your site to the Petitchef family you can use http://en.petitchef.com/?obj=front&action=site_ajout_form or just go to Petitchef.com and click on "Add your site"

I love the last picture!

I'm only familiar with the eggplant and chickpea products, but they are really good. I hope I'll be able to find the noodles soon.

As you can tell by your inbox blowing up with my comments, I am REALLY far behind on my blog reading.

I also got a package of Tasty Bite stuff that I need to review and dang, I loved everything. If I was still at my old cube-dwelling job, these would definitely be in my drawer.

I'm a huge Tasty Bite fan! I like your idea of the salad bar salad + Tasty Bite rice + lettuce leaves for an instant meal that almost seems homemade! I also agree about the "two servings!"

Im a huge Tasty Bite fan! I like your idea of salad bar salad + Tasty Bite + lettuce leaves for an instant meal that seems homemade! I also agree about the "2 servings!"