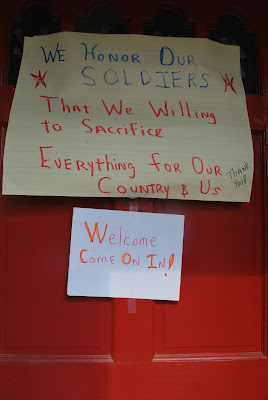 Vaughan fired up the grill, and I tossed on some Veggie Tofu Kabobs that I made using the Basic Broiled Tofu recipe from Appetite for Reduction: 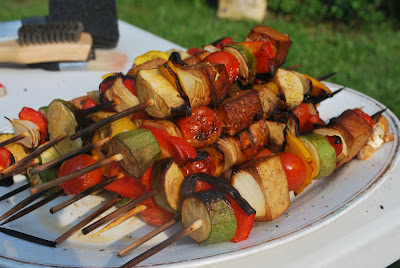 We also grilled Tofurky Beer Brats, but I forgot to take a picture of those. You all know what they look like, right?

Greg brought his famous Tofu Chicken Nuggets. These keep getting better and better every time. They really taste like chicken! 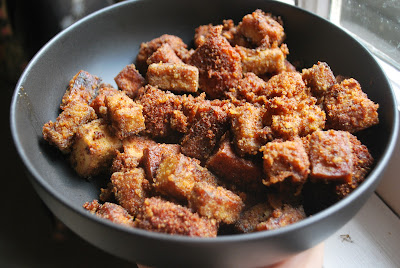 Vaughan made Mustard Buckwheat, which sounds really weird and hippie-ish. But it was actually quite tasty: 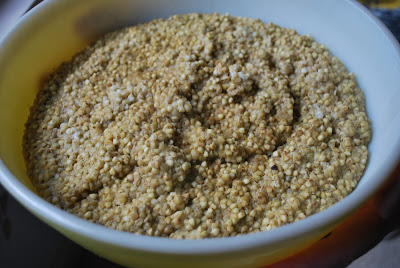 And Vaughan also steamed some Mustard Greens, which we ate with Hart's homemade Ghost Pepper Sauce. Man, that stuff was H-O-T! But delicious! That stuff will put hair on your chest, for reals. 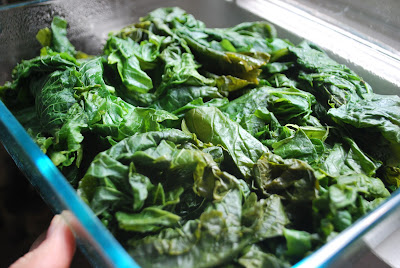 There were a few more dishes that I failed to photograph, like Andy's Pasta Salad with Tofu Feta (so proud that my non-veg friend used tofu in place of feta!!) and John's Baked Beans.

For dessert, I made Blondies using the Bella Brownie Maker machine that Greg got me for Christmas. Have y'all seen these Bella machines? Target and Amazon sell them. They're little plug-in machines (like wafflemakers) that cook brownies in eight minutes. This was the first time I've used it, and I was blown away by these brownies. They were the chewy, soft kind ... like a big ole cookie bar! I used the blondie recipe in the booklet that came with the machine, substituting Ener-G egg replacer powder for the eggs called for in the recipe. 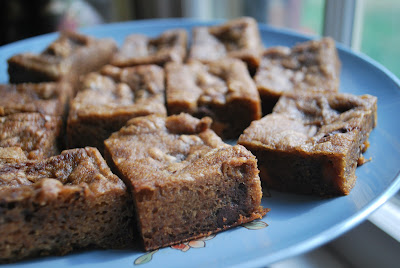 Shay made a tasty Berry Cobbler: 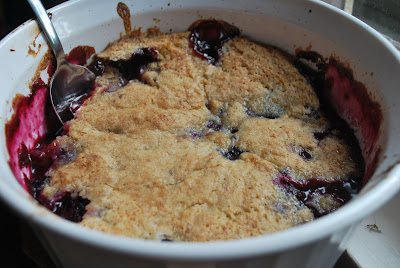 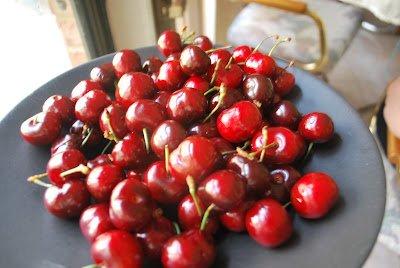 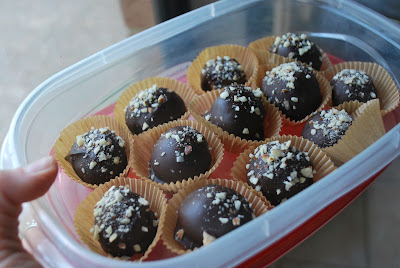 But Shannon wins the award for most creative grilled dessert — Banana Boats! She made a slit in a banana and stuffed them with carob chips. And then we melted them, with the skin still on, on the grill: 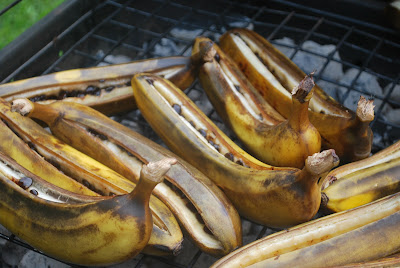 To eat these, we just opened the peel a little more and dug out the melty carob banana with a spoon. Fun!!
Posted by Bianca at 12:18 AM

Oh wow! That looks like an amazingly delicious meal!!

And the banana boats are genius!

Looks like you had a some tasty holiday treats! I'm jealous! I had to work all day.

oh my gosh those kebabs look outstanding! and i'll take a banana boat please!! haha thanks for sharing!

What a fun day! I am so envious of everyone that goes to vegan potlucks. I don't know any vegans around me so I never get to partake in anything like that! I get to live vicariously through you though!

The tofu kebabs look absolutely perfect! And I wouldn't be able to choose between all of those amazing desserts! The banana boats are pretty awesome though. Never heard of the brownie maker, it sounds so cool!

By the wayyy, I had a totally random dream about you last night. I went on a trip to see you, and you lived in a dilapidated old apartment building. The inside was all torn up and falling apart, and your apartment turned out to be just a kitchen, and it was only the size of a closet. It was decorated all retro-y, and when I came in you were wearing a little checkered apron with frilly edges. I was excited to see you, but you just stared at me and didn't smile. I was weirded out, so I went out to wander the building. Turns out the entire building was inhabited (besides yourself) with flamboyantly gay vegan men. There was this one huge room that was just hundreds of teeny tiny rainbow-colored stairs, all slowly revolving like a giant treadmill, and the guys were sitting on it as it moved, doing each others' hair and nails and talking about vegan food. So I chatted with them for a bit. They were nice.

Amber, that is my idea of heaven! Gay vegan men! Rainbow stairs! An apartment that's only a kitchen!!!!! BEST!! But sorry I didn't smile at you. That blows.

Man, I need to move to where you live!!

Wow, I wish I could attend such an event. The food looks so good! Everything actually looks delicious.

Ooh, I need to try that banana grill business! I'd add some peanuts.