Imagine Vegan Cafe Has Faux Shrimp (and Other New Items)!

Memphis' only full-service vegan restaurant, Imagine Vegan Cafe, recently celebrated its first anniversary (check out this post for pics of the out-of-control birthday buffet), so owners Adam and Kristie decided it was time to revamp the menu.

Now, for those who don't live in Memphis, let me explain something about Imagine Vegan Cafe. The original menu was already massive with around 60 savory items (think chicken fried steak, cheesesticks, drumsticks, vegan cheese pizza, Philly cheesesteaks, beef tips & rice) and a rotating array of vegan layer cakes, cupcakes, deep dish pies, brownies, fudge, cookies, and milkshakes. But now the menu is even bigger with 13 more items! They removed a couple of items that didn't sell so well, but for the most part, the original menu is intact.

One of the most impressive selections on the new menu is the Fried Vegan Shrimp Plate: 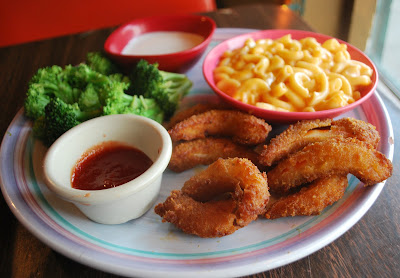 They use the VegeUSA Vegan Shrimp. They're battered, fried, and served with cocktail sauce. I've never had real shrimp, but my omni boyfriend Paul tried one, and he said they are a dead ringer for the real thing. And they even look like real shrimp on the inside! Just FYI: I never liked seafood when I did eat meat. So I was a little skeptical as to whether or not I'd like these. But they don't taste fishy at all. They just have a fun chewy texture. With most entrees, you can choose two sides, so I picked my long-time faves: Mac & Cheese (made with Teese!) and Broccoli with Imagine's homemade ranch for dippin'.

Before, the menu was printed on white paper, and a gigantic blown-up version of the menu was taped to the wall by the front counter. But now they've gone all out and had real menus printed and encased in plastic. Adorbs! 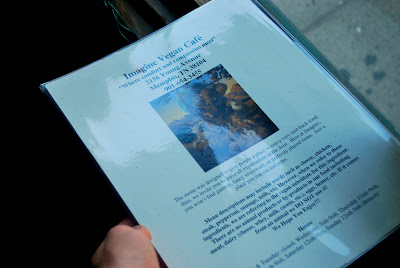 Since I've tried EVERYTHING on their old menu (I eat there every week ... sometimes twice a week!), I'm excited for the challenge of working my way through the new selections. Next up: Double Bacon Cheeseburger. Oh yea.
Posted by Bianca at 12:27 AM

Looks great! I'll give it a try. The only faux seafood I've had there was the Mahi Mahi, and I wasn't too impressed. Maybe because, even before I was vegan, I hated seafood.

Faux shrimp? I have never heard of such a thing! I'll be in Memphis soon and I hope to finally try Imagine.

Always creeped out by false fish products, they taste too...fishy. Which sounds mad. There's some vegan fish fingers in my freezer that have been there for at least a year!

that plate looks SO stinkin good! I wish we had an Imagine Cafe! Thanks for sharing!

I love VegeUsa's vegan shrimp. I live in LA and there headquarters are about 20 mi southeast in Monrovia. They have this awesome little shop underneath their offices where you can buy all kinds of crazy faux meats like vegan ham, smoked vegan ham, vegan tuna, vegan goose pate stuff...I once bought a vegan lobster from there (it wasn't really that good though, boo). The vegan shrimp are probably my fav. Whole Foods out here stopped carrying them and that's how I discovered the aforementioned store--I ended up buying a 3 lbs bag of them, haha ;)

Meant *their* headquarters. Can't believe I used the wrong their/there/they're!

Interesting... I loved shrimp before I went veg. Might have to try this out...

That restaurant seems to be totally my type. I hope you share a picture of the double bacon burger when you try it.

CHILI CHEESE FRIES. OH MY GOD. It's a bit ridiculous how often I crave those and can't get them anywhere. hahah! I'm excited about Imagine's menu additions! I still want to get back there to eat for lunch/dinner, since we were only there for brunch last time - which was stupid good. I want some of that mac and cheese!

I love vegan shrimp! That's awesome that they serve it now. Shrimp was one of the last meats I gave up when I first went vegetarian.