Yea, yea. It's May 8th. But it's not too late to tell you what I did on May 5th, right? My bestie Nathan was in town from North Carolina, but I had to go to the Beale Street Music Festival at 4 p.m. So we planned a Mexican-themed noon-time picnic in Overton Park.

Here's me and Nathan at Rainbow Lake! 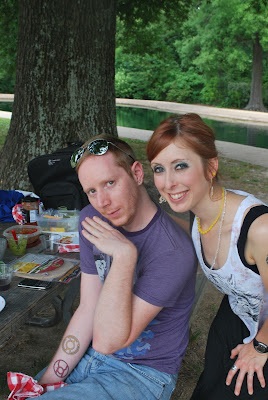 While we were there, lots of other people eager to see Nathan after his year-long absence from Memphis stopped by. I was the only one who brought food though. Luckily, there was plenty to share.

I made some Mexican Chicken — Lightlife Chick'n Smart Strips, sauteed bell peppers and onions, garlic and chili powder — to stuff inside tortillas. Dionne called it "trick-un" since it was made with fake chicken: 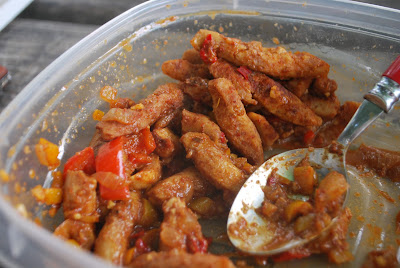 We wrapped the chicken in whole wheat tortillas with Rice Vegan Galaxy cheese slices and salsa. I also brought some Wholly Guacamole and Beanfield's Sea Salt Bean & Rice Chips. Even though none of the others at the picnic were vegetarian, they all loved the faux stuff! 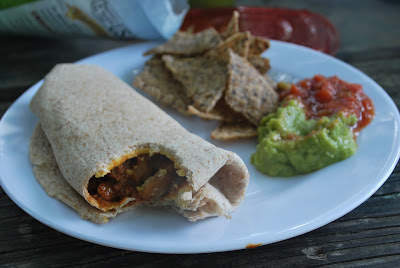 While margaritas would have been the best choice, I didn't have time to make any homemade 'rita. So I brought along a bottle of Sangria and some ice: 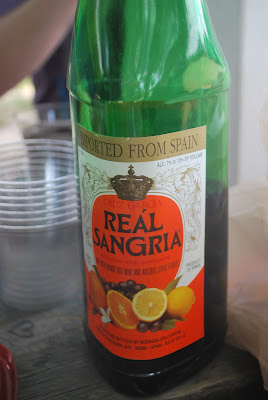 It was a lovely way to celebrate the Mexican 5th of May!
Posted by Bianca at 10:55 PM

Wow sounds like you had a wonderful Cinco de Mayo

I've never tried a bottled sangria before... is that brand good?

Yum looks great! I love picnics, sounds like you had a lovely day!