I'm combining the two official working days of Vida Vegan Con since the weekend is approaching, and I never blog on weekends. Sorry for the ultra-long post. I promise not to talk too much. I know you really just wanna see pictures!

On the first morning of Vida Vegan Con workshops, we were treated to an AMAZING breakfast buffet! There was tofu scramble, roasted taters, pancakes, gluten-free biscuits with white bean gravy (I went back for gravy seconds and filled a whole mug ... us Southern ladies like gravy, you know), chia pudding, and fruit. I was kinda sad I got fruit because I could have used that space for more taters or gravy: 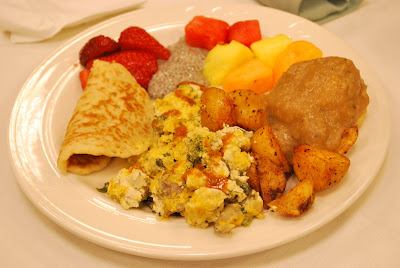 After breakfast, I caught all my favorite cookbook authors sitting at one table! There was Vegan with a Vengeance/Veganomicon (plus more books than I have room to list) co-author Isa Chandra Moskowitz and her boyfriend Vegan Omaha founder/Laziest Vegans in the World blogger John McDevitt. Don't worry. Isa would karate kick John if he was really choking her: 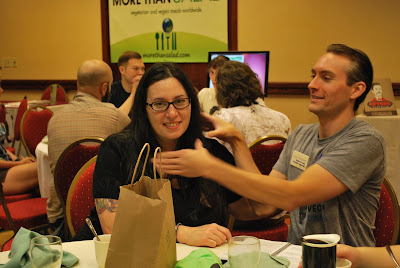 And vegan cookbook pioneer Bryanna Clark Grogan and the lady who gave us the steamed sausage and Everyday Dish TV, Julie Hasson: 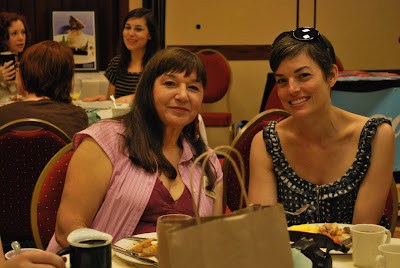 Plus, our very own Vegan Cookie Connoisseur, Kelly Paloza: 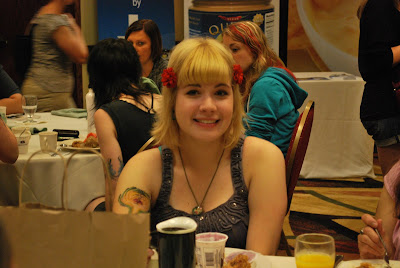 A few tables over, the Vegan Goddess of Compassion (otherwise known as Colleen Patrick Goudreau) was selling her cookbooks, including the new 30-Day Vegan Challenge, which I'll be reviewing very soon: 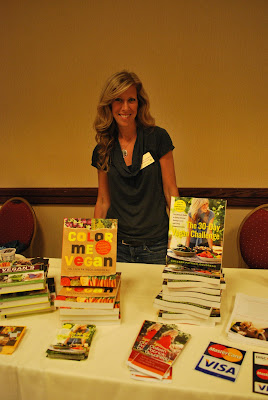 My first panel, Build-a-Blog, with Amey of Vegan Eats & Treats and Sherri of Vegan Nosh, went great! We discussed the ins and outs of building a blog through free programs, like Blogger, versus hosting your own page, as well as how to build a blog following.

After the panel, I went to the Vegan Battle Royale game show, where teams were pitted against one another to test their vegan knowledge with questions, like "Which classic vegan cookbook pioneered the now-popular nooch-based mac & cheese?" (Answer: The New Farm Vegetarian Cookbook. Duh!). All attendees were treated with Kittee's Gluten-Free Carrot Cake Cream Pies: 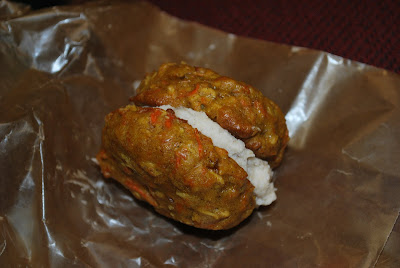 Kittee of Cake Maker to the Stars and Amey of Vegan Eats & Treats led the game show. And to the left, you can see Panda Cookie, who was randomly chosen for one of the two teams: 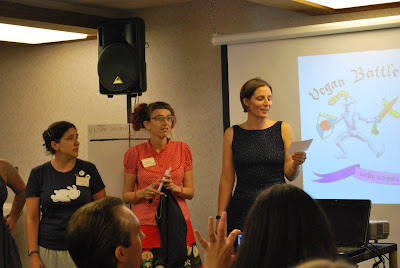 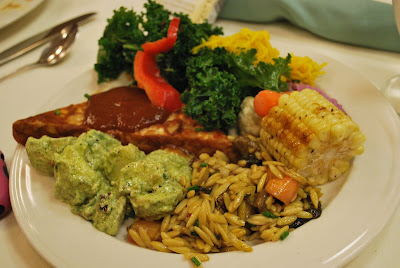 After lunch, I spoke on the Small Town, Represent! panel with John of the Laziest Vegans in the World, Lauren from Whoa Wren, Ryan from T.O.F.U. Magazine, and Elizabeth Castoria from VegNews. We shared tips for finding vegan meals and building vegan community in small towns.

After the day's workshops, we all got gussied up and headed to the Ambridge Event Center for the Woodstock Farm Animal Sanctuary Galarama. On the menu: Sizzle Pie with Daiya Cheese, Gardein sliders, Gardein chicken strips, and spring rolls! 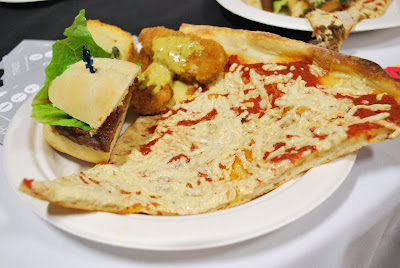 Even my omnivorous boyfriend Paul ate vegan food ... and liked it. Ok, well, he didn't like the Daiya, but that was cool because he pulled the cheese off his pizza and gave it to me. Score! 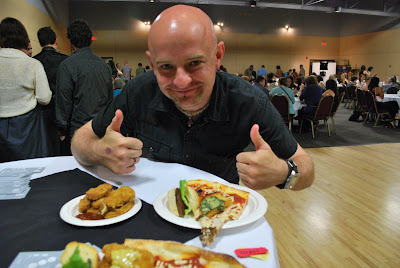 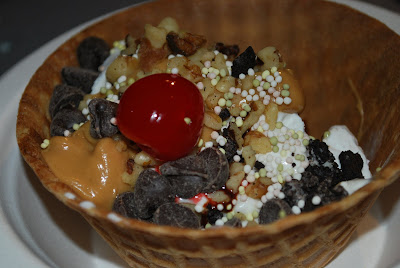 Once everyone got their bellies full, it was time to dance off some calories. Jen from That Pain in the Ass Vegan broke it down: 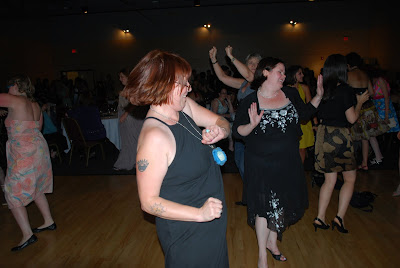 And while others were dancing, I was meeting Vegansaurus blogger/funny lady Laura Beck! 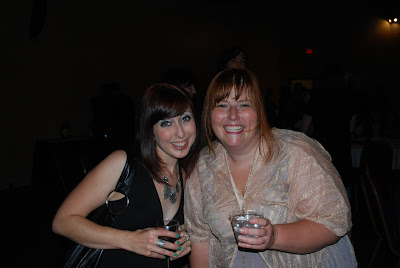 The gala was also a silent auction, and vegans vied for loads of awesome goodies to benefit Woodstock. I didn't win what I'd bid on, but these guys were all lucky winners of a vegan purse, a VegNews dessert basket, a cool dried orange necklace, and so much more! 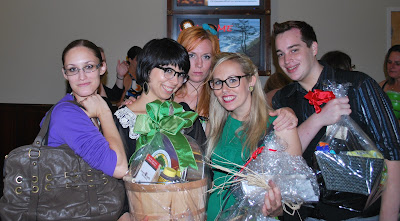 Now, after the gala, I was stuffed from all the Sizzle Pie and ice cream, but that didn't stop me from hitting up the Upton's Naturals late-night, pop-up seitan sandwich shop at Food Fight Grocery! They were offering three sandwiches made with thinly sliced Upton's seitan. I opted for the BLT, but I was so full that I ended up just pulling the slices out and eating them sans bread: 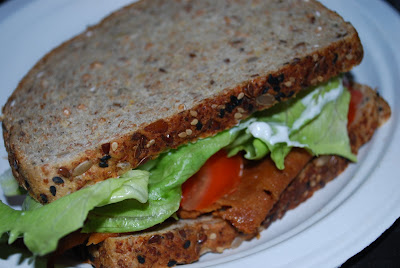 Sunday began with the same massive breakfast spread, so this time, I left the fruit off my plate in favor of more biscuits. Yes, my priorities are clearly in order.

After breakfast, I served on my final panel — Product Reviews & Ethics. John of the Laziest Vegans, Kyle of Vegan Vagrant, MeShell of Prairie Vegan, and I talked about the do's and don'ts of reviewing restaurants and products.

Lunch on Sunday was a fantastic Taco Buffet! We chose from corn or flour tortillas to fill with Soy Curls, taco "meat," sauteed peppers, vegan sour cream, guacamole, salsa, olives, and Daiya cheese. And there was raw nut meat to stuff inside lettuce leaves, plus rice for the side. Best lunch buffet ever. 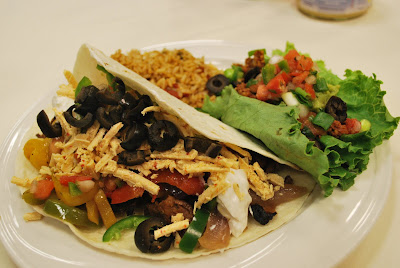 After lunch, I watched the Publishing Panel, during which cookbook legends like Isa, Terry, Julie Hasson, Bryanna, Joni Newman, as well as T.O.F.U. Magazine publisher Ryan Patey, discussed the ins and outs of publishing a cookbook. 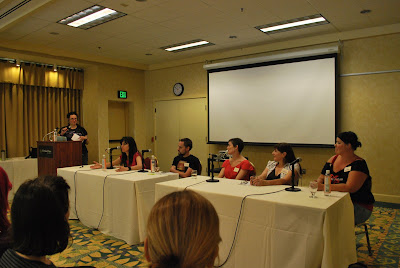 We were all soooooo very sad when the conference was over. Everyone stuck around after Isa and Terry's closing address for hugs and last-minute photos. Luckily, we didn't have to fly out until Monday morning, so we met up with a group of stragglers at the Bye & Bye, another totally-vegan bar! Here's Katie of Vegan Noms, me, Paul, and Brit on Twit: 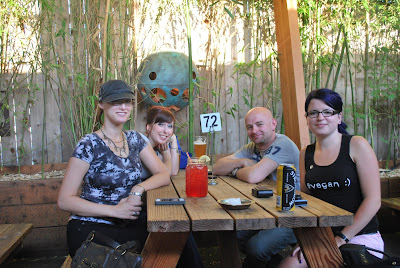 It was so hard to choose what to order. After all, it was my last meal in Portland. Plus, everything on the Bye & Bye's menu is vegan, soooo ... I ended up going with the Grilled Cheese made with Daiya, tomato, avocado, onions, and jalepenos: 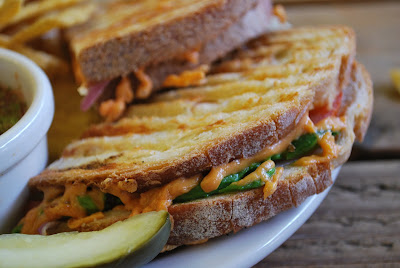 I think Portland was beginning to wear off on Paul because he loved his meal — the Eastern Bowl (brown rice, nooch-covered tofu, broccoli, and peanut sauce): 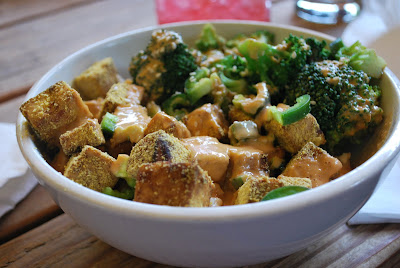 After we finished our food, I had a startling revelation! Since Bye & Bye is a vegan bar (with only vegan beer, liquor, wine, and mixers), they must serve a Vegan Bloody Mary. I haven't been able to order a Bloody Mary from a bar in nearly 7 years because most Bloody Mary mixes contain Worcestershire sauce, which contains anchovies. Ick! But the Bye & Bye served a bomb-ass, fish-free Bloody Mary. Best cocktail ever. 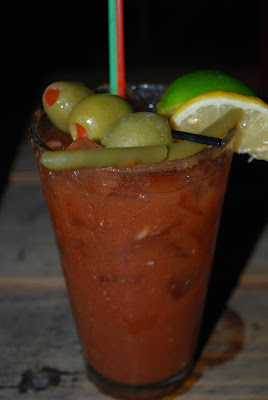 As the night wore on, we realized we had to go to bed. Our flight was leaving at 10 a.m. But first, we had to see off the last remaining friends in our vegan posse with a round of tequila shots!! That's Kyle of Vegan Vagrant, Jared (who doesn't have a blog yet), me, Katie of Vegan Noms, and Paul. Brit on Twit was the DD, so she took the photo: 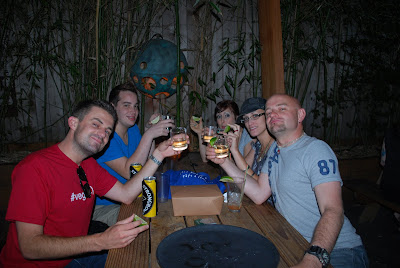 Lucky for me, Kittee was still hanging out late too. She was sitting at the next table over, and I just had to give her a big ole goodbye hug! 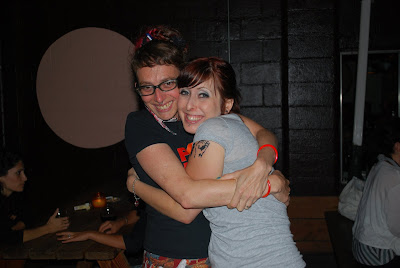 Goodbye, vegan blogger buddies! Vida Vegan Con was one of the best experiences of my life, so I'll see you all again at the next one in 2013!
Posted by Bianca at 12:40 AM

YES, definitely 2013, and if not before I WILL spend time with you then! :D

great recap - I really wish we were starting all over again tomorrow...

Another wonderful recap! I'm really enjoying seeing the conference through other people's eyes. Many shared experiences but lots of unique twists and turns.

Bianca,
So glad to hear you had such a great time! I've been i the Midwest all summer visiting family and you've made me eager to get back to the Northwest. Thanks for sharing!
-Aimee

YAY!!!! Love all of the posts! I'm in awe of all of the amazing food you were able to consume! Hahah! Hope we get to vist Portland together soon! The conference sounds so awesome!

Seriously, I just cannot get enough of hearing about this conference, the food, Portland, the rad vegan peeps! Thanks for a great overview. ;)

Carrot cake cream pies at the battle royale?! But I was there!...I didn't get one... ::dissolves into tears::

Oh, the memories! I wish I could relive (and retaste) these moments whenever I wished. Now let's order another round! :D

That was one hell of a weekend!!!

That looks like it was so much fun! Any one part of it would have been enough - the awesome food, the slammin' town, the incredible and talented people, the dancing... But you got it all in one weekend! While living vicariously through all of these re-cap posts is entertaining for sure, it definitely makes me want to go in 2013 and witness it for myself! :)

Wow, the whole event looks like it was such a blast and your food photos totally won me over! I think I'm going to have to save for another trip to the states, just so I can attend VVC!! Thanks for the updates Bianca x

Oh man, so everything about VVC sounds amazing, but... ICE CREAM BAR?! I SO want to be there next time!