It's been awhile since I've done a Bluff City Vegan Eats post, mostly because I've been eating out twice a week at Imagine Vegan Cafe (not exaggerating ... we go every Wednesday night and every Sunday for brunch). But turns out, there's been a very, very vegan-friendly Chinese joint in Memphis for quite some time.

A friend filled me in on the magic that is New Hong Kong. This tiny, mom-and-pop Chinese restaurant is tucked into a nondescript shopping center in East Memphis, about 20 minutes from my Midtown neighborhood. Driving past, you'd never in a million years guess they'd have anything beyond the typical bean curd stir-fry.

But girl, they do! They have a whole secret vegan menu! There's only one copy and it's stashed behind the counter, so you have to ask to see it. But it's loaded with about 30 or so totally vegan dishes, most of them made with mock meats. They even have a disclaimer on the veg menu to let diners know that all dishes are free of animals and their by-products, including eggs and dairy. How cool is that?!

I met Stephanie (Poopie Bitch on the PPK), her husband Richard, and their baby Peter there yesterday to check the place out. We started with an order of Vegetable Wontons: 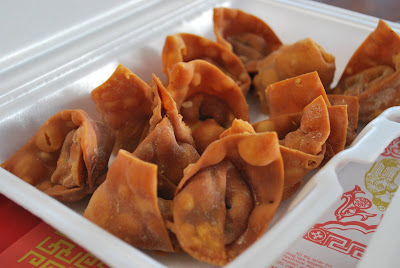 Now, I haven't had a wonton since I gave up dairy cream cheese in 2004. And I used to LOVE me some fried wontons. These were cream cheese-free and just stuffed with veggies instead. This batch was a little overcooked, but still tasty, especially when dipped into the sweet 'n' sour sauce. I'm going to order them again next time to see if they're not quite as overcooked. 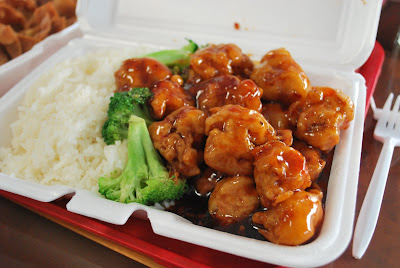 I don't think I've ever had meaty General Tso's chicken, but it's such a standard that I HAD to order the vegan version. The "chicken" was wheat gluten-based (as are all their mock meats) and fried. Then it was coated in a sweet 'n' spicy sauce. I love how they included three little pieces of broccoli! Gotta make more room for the mock meat because that's the good part.

I really loved the texture of their mock chicken. It wasn't creepily meaty, but definitely toothsome enough to fool any omni. I mean, it looks just like real chicken, right?!

Richard ordered the Sweet 'n' Sour Chicken, which came with a side of that iconic bright red sweet 'n' sour for dipping: 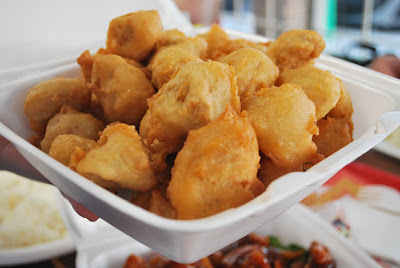 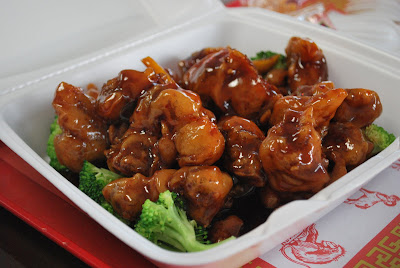 This may have been everyone's favorite dish. Though I loved the chicken, there was something extra special about the fried "beef" chunks coated in a sweet 'n' savory citrus sauce.

We'll definitely be going back very soon. New Hong Kong also offers dishes made with mock ham, mock shrimp, and regular old tofu (but who would order tofu when you can have mock beef?). They even have vegan lo mein!!

Oh man. I ate my leftovers for lunch today, but looking at the picture seriously makes me want more. I don't know how we went so long without knowing about this place!

Dude! That's a *major* find. Vegan greasy Chinese?? Definite win! And it looks exactly like the real stuff (and I bet tastes even better!)

I love secret menus! That looks so good!

Side note: I ordered soy curls from Vegan Essentials. I can't wait to do something with them!

So excited to hear about this place! I cant wait to check it out- hopefully this weekend!!! Thanks for sharing!

Oh! I love glazey gooey deep fried Chinese food! Im so happy we have a vegan buffet like that no too far from us... but luckily for my figure, it's a 30-minute drive, so we only make it out once a month!

got the general tso mock chicken and it was fantastic. shouldn't have gotten the large, but now i know!

Holy crap, I would order one of everything.

Thank you for the important public service that is Bluff City Vegan Eats :-)

Ooooooooh man! It's such a good thing that Lindsey and I never ate there before we left. I would be soooooo (much) fat(ter). Junk Chinese food is a major, major weakness of mine.

wow... you sure they didnt bring you the regular menu items? those look exactly like the "non-mock" menu items... very nice!

They've got mock shrimp, even? Hells yeah! Everything looks awesome.

Twice a week to Imagine Café? Would do the same if I were you. What a great place that is! Can't wait for January when I am in Memphis! I will check this one out too. Thanks!

Oh my LORD, does that all look so incredible! Very jealous. :)

Well, shoot, it's going to be really hard to decide where to eat when I finally get my ass to Memphis! hahah! This all looks ah-mazing! I mean, Imagine is a must, but maybe Chinese food can be worked in there somewhere?? haha!

I love that they have a "secret" vegan menu. Even better that the secret is good.

thanks for sharing this cause it is less than a mile from where I work! I have eaten there before with friends, and really didn't have much to order. I'm surprised they didn't notice I was vegetarian & offer the menu up, but they didn't, so make sure to ask for it I guess. And this place is a hole in the wall, you won't find anything fancey inside, in fact I question the health codes of that place cause last time I was there, there was a flying roach that was scaring us to death & they did nothing about it. So if you can handle that, go ahead! I will give it a try again on the secret menu, but I'll take it to go!

dazlious, I KNOW. I live in Japan, so the Chinese food is usually seafood or meat based. And even the omni stuff is nothing like back-home-Chinese. I'm in a comfort food depression now.

I finally got to try this place on Monday and it was great! I can't believe how many choices there were!! My kids and I had the fried wontons (which were unfortunately just as overdone and dried out as yours were, everything else was great though), fried veggie dumplings, special lo mein (HOLY COW- so good!), and Kung Pao shrimp. Can't wait to go back!

I showed the owner your blog on my phone and she was blown away!

I have been to two restaurants that had secret veg menus. One of them is a Thai restaurant that I have been going to for 12 years. I only found out about the secret menu like 3 years ago. All those years, I had so many more options available, but didn't know it. I saw someone looking at this green menu and I asked what it was.

At the very least, they should put a note on the regular menu saying they have a veg menu.