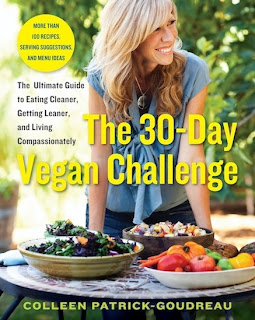 I'm already vegan, so I guess I'm not really taking Colleen Patrick-Goudreau's 30-Day Vegan Challenge. But for the sake of her new book of the same name, I'm pretending I am. I was given a review copy of The 30-Day Vegan Challenge at Vida Vegan Con. I have all of Collen's books, and I was more than happy to offer my opinion on her latest.

But unlike most of her books, which are aimed at people already familiar with veganism, this new book is designed for people who are considering going vegan. Much like with past vegan challenges via Oprah or the Physician's Committee for Responsible Medicine, the program follows the thinking that if a bad habit is broken in a month's time, maybe 30 meat-free days are all it takes to make a permanent change.

It worked for me! When I went vegan in 2004, I initially only gave up dairy, eggs, and other by-products for a trial run of 30 days. And when that time was over, I realized there was no way I could turn back. Vegan food was tasty, and non-vegan food was cruelty. Why contribute to violence when I could live happier on plant proteins?

I wish I'd had a book like Colleen's back then. I had a few rough patches during those 30 days, and I really could have used her advice in chapters on reading labels or finding vegan food on the road. Each short chapter is intended to be read in a day, and each focuses on one small aspect of veganism: baking without eggs, getting enough iron, compassionate fashion, and surviving the holidays.

Interspersed are recipes for Colleen's favorite dishes from her other cookbooks — The Joy of Vegan Baking, The Vegan Table, and Color Me Vegan — such as chickpea burgers with tahini sauce, French toast, no-queso quesadillas, and apple cobbler.

For the sake of the review (and because it's fun!), I'm reading a chapter a day and making at least one Colleen recipe from each week's worth of recipes. I'll post about each one. So far this week, I've read about determining which ingredients in your pantry may be accidentally vegan, the best way to find vegan items in the grocery store, and common animal ingredients to look out for.

The first recipe I made was located in the first week's choices, which were mainly breakfast foods. Even though she included recipes for tofu scramble, tempeh bacon, and blueberry pancakes, I opted for the easiest option — the Blueberry Smoothie: 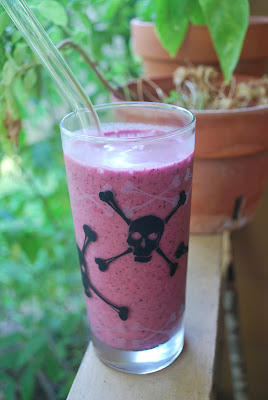 Now I'm not typically a smoothie-for-breakfast kinda girl. I usually prefer hearty, savory breakfasts. But post-Vida Vegan Con, I wanted something super healthy. And this is no ordinary smoothie. It's filled with blueberries, strawberries, banana, soymilk, orange juice, almond butter, and flax seed. It honestly kept me full until lunchtime! Colleen also includes recipes for her mango smoothie and green smoothie. 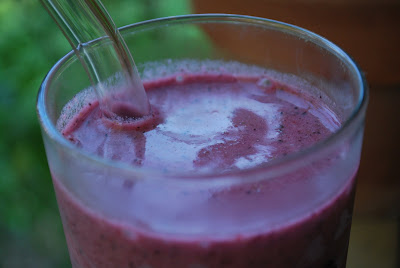 If you're not a vegan, BUY THIS BOOK. If if you're already vegan, The 30 Day Vegan Challenge would make an excellent Christmas gift for that veg-curious friend or family member. Check back throughout the month for more food photos and thoughts on the book.
Posted by Bianca at 11:19 PM

Was wondering about this book to "gift". Are the recipes pretty easy? A lot of meat substitutes or not? Cheap or pricey ingredients??
thnx!!

I love other books, what a great ouvre she has! I don't even remember how I went vegan anymore... I think I just stopped drinking milk and the rest came naturally... this sounds like a great conscious method.

great post, though i can't help but say where's the greens/veggies in that smoothie?!?! ;) lol

It sounds like a great book for anyone who thinks about going vegan! I also wish I had had such a book when I wnet vegan.

I love your glass! And it's so easy for people to go vegan these days with books like that. Plus Colleen is awesome.

That smoothie sounds so tasty!

I really love that glass! Especially with the purpley blue background. As quite a new vegan I wish the book had been out 9 months ago, it would have made things a lot easier!!

This does sound like a great gift....hmmmm. BTW, love your smoothie glass! :o)

Great looking smoothie. I've never had almond butter, is comparable in taste to any other nut butters?

This is how I went vegan. Not from the book, but I put myself on a 30 day vegan challenge. I stumbled a little, but eventually I made the complete change.

I have been dying to go Vegan and would love a book of advice...I am going out to buy it tomorrow. Thank you!!!