Checking In with the 30 Day Vegan Challenge

Remember how I said I was taking the 30 Day Vegan Challenge in Colleen Patrick-Goudreau's book of the same name? In case you missed that post, I'm reading a chapter a day in Colleen's new book. The book is designed for newbie vegans, and each daily chapter provides valuable info on the essentials of veganism.

Yes, I'm already vegan. But I'm reading along for the sake of review. So far, the book has gone over stocking your healthy vegan kitchen, shopping for vegan items in the grocery store, packing vegan lunches, delicious vegan breakfast ideas, and eating vegan on the road.

I'm on Day 11, a chapter titled "Rethinking Meat Cravings: Salt and Fat Taste Good." But despite the meaty theme for today, I chose to make a few veggie-based dishes from another chapter in the book.

I made use of some leftover Labor Day charcoal to grill these Marinated Portabella Mushrooms: 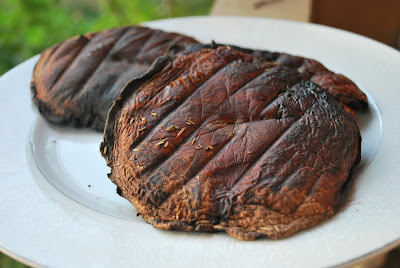 The oil-free marinade is simple: fresh or dried herbs, balsamic vinegar, tamari. I let the caps sit in the fridge for a few hours in the marinade, and then I grilled them for about five minutes on each side.

For my side dish, I made the Herbed Scalloped Potatoes from the book: 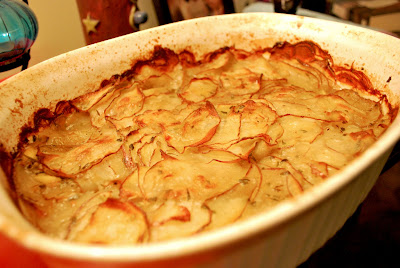 Now I realize this looks like a food photo straight out of the '80s. But it was already dark outside, and my indoor lighting situation is less-than-awesome. The flash photos made the taters look weird, so this is the best I've got.

Anyway, unlike most scalloped potato recipes I've made, this one doesn't call for any kind of vegan cheese stand-in. Not even nutritional yeast. Instead, it relies on a broth made from boiling and steeping herbs, like sage, bay leaves, and rosemary. The oil drizzled over the top gave the dish a butter-y texture and flavor. Delicious! 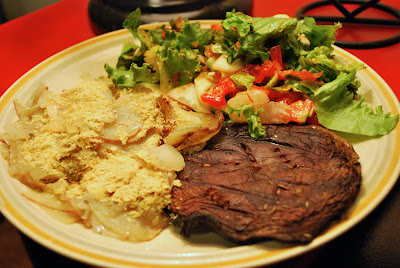 I sprinkled a little nooch over my taters because I couldn't help it. I also tossed together a simple salad of romaine, tomato, cucumber, sunflower seeds, and Vidalia onion/tomato vinaigrette.

I realized after I planned this meal that it was mostly void of protein, except for a teensy bit from the sunflower seeds. But that's okay. I eat plenty of protein (too much probably) throughout the day. Sometimes, it's okay for veggies to be the star of the show.

What's your favorite veggie-based entree?
Posted by Bianca at 10:53 PM

Oh, those scalloped potatoes look so good! They remind me of my childhood except, well, these look healthy!

I didn't buy Colleen's new book in PDX because I had a stuffed suitcase but I think I'll pick it up next month as she's doing an event in NYC.

Those potatoes look amazing. I might have to hunt the book down just for that recipe, especially as I'm not the biggest fan of cheese substitues!

The Yazoo Sue is SO GOOD! The Wild Cow is one of the only places that always has it...how convenient :) Have you tried the ShipWrecked pumpkin beer? I really am convinced it's the best one out there, but I'm going to test all the ones I haven't had before this season. You know, for the blog's sake.

Your post is enough to make me run to the store for some of those shrooms :)

Hi Bianca! I'm writing an article for a magazine writing class and was wondering if you would be willing to participate. The article is on vegans/vegetarians who date omnivores. It will focus on how they compromise on on their diets through out daily life. If you're interested please e-mail me at quinonez@marshall.edu. Thanks so much!

Those potatoes look mighty tasty! I actually don't think I've ever attempted to make scalloped potatoes and now I am wondering why?!?! ha!

The potatoes look outstanding! I used to feel like every meal had to have a protein, veggie and carb but I've been breaking the mold lately. I pretty much always have veggies but can forgo the grains or protein, depending how I'm feeling.

For those bad lighting photos, just say it was taken with instagram or some other hip photo app, then it'll be all good :)