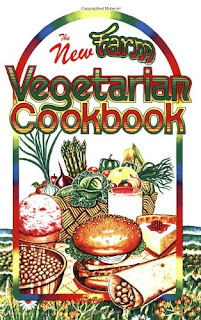 Hey guys! Quick post tonight! I wanted to let y'all in on a fun vegan retreat scheduled at the Farm in Summertown, Tennessee for October 7th through the 9th.

I've been invited again to host a cooking demo at the Farm. If you've never heard of the Farm, it's a community of vegans and vegetarians who've been living on several thousand acres of land in middle Tennessee since the early 1970s. The on-site Book Publishing Company (the awesome publisher of my Southern vegan cookbook, scheduled to hit stands in April) pioneered the vegan cookbook phenomenon with the publication of The New Farm Vegetarian Cookbook. I mean, they practically INVENTED noochy vegan mac & cheese with that book.

Other Book Publishing Company books include everything by Louise Hagler (Tofu Cookery, anyone?), Jo Stepaniak's The Uncheese Cookbook, and most of Bryanna Clark Grogan's amazing tomes.

The vegan retreat will include demos from yours truly, as well as the fabulous cookbook author Barbara Bloomfield (More Fabulous Beans, Soup's On), the multi-talented raw cracker maker Douglas Stevenson, and possibly even the tofu goddess Louise Hagler!

The price is $250 for individuals or $450 for couples, but the Farm is offering a special discount of $50 off the original price to Vegan Crunk readers. Go here for more information, and let 'em know you read all about it here for your discount. If you can't make the October retreat, there's another scheduled for February 24th-26th, 2012.

For more on the event, check out my post from the last Farm Vegan Retreat last February.
Posted by Bianca at 9:00 PM

looks like fun, but really expensive. wow, $250 for a weekend!

AHH! I was invited to come to this. I'm really upset that I'll be out of town on the 7th working and I won't be back until the 8th.
God. I'm just dreaming of the Farm's tofu right now. I absolutely hate that when WF bought Wild Oats, they stopped carrying the best tofu ever.
The price seems a little steep, but not when you consider how much hotels cost in general. I hope you have a fantastic time!

Sounds cool. $250 seems a little steep to me, otherwise I would have totally made the trip.

Yikes! Expensive. It does sound like a great time though!

Congrats on being invited again. Have a great time!

I LOVE THIS COOKBOOK! I bought one a few years ago at the thrift store and I think it's wonderful! I love that it tells you how to make everything yourself including soymilk!

Congratulations on being invited back. You must've done something right!