Check your diet at the door. Fried food is where its at when it comes to pleasing the soul. And a little bit a grease never hurt anybody. It's the lotta bit that'll pile on the pounds. I allow myself to eat deep fried foods a few days every month, though it's typically in a restaurant where I don't have to do the fryin' myself.

But tonight, I broke out the canola oil and a deep saucepan. I had to test my Fried Squash for the cookbook: 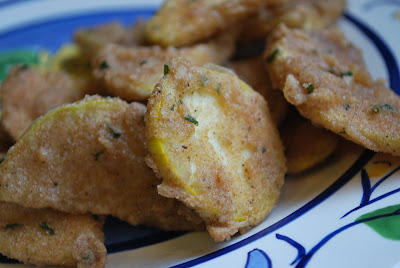 Now, as I've stated before, most of my recipes aren't fried, and the ones that are typically come with alternative baking instructions. But not this one. Fried squash cannot be faux-fried in the oven. Nope. That's just silly. You gotta batter it and drop it, slice by slice, into super-hot oil. The hotter the oil, the less likely your food will absorb too much fat.

I served my squash with a big side salad and some bean balls that I'm also testing for the book. More on those later. They still need work. But the highlight of the meal was definitely the squash. Now I've had my fill of fried foods for at least a week. 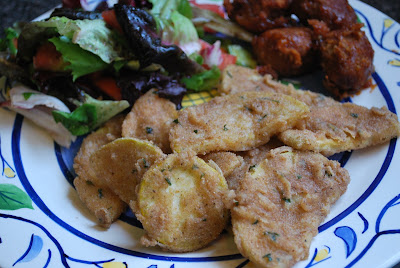 looks delish! those are begging for a dipping sauce :)

I fry things all the time. Probably once a week or every other week at least. And I ain't apologizin' to no one. Your squash look so good, though! I would eat that at 8:24 AM. No question.

I grew up eating fried squash! Delicious!! I agree, fried food every once in a while is yummy and there's no harm in moderation! Yum yum yum...

I LOVE fried squash and zucchini! I will never tire of it! Must be a southern thang!! :o)

i love fried too, but i don't do it all the time because i'm lazy. i'm like you, i'd rather have someone fry in a restaurant. the problem is most places don't have an exclusively vegetarian fryer.

I love everything fried. I agree with Shelly, hope there's a good dipping sauce recipe in the book.

I haven't eaten fried food in years. When I was deep in my ED I shunned anything fried. Honestly, I'm still a little intimidated by it. It's kind of silly, because I know I would never eat enough fried food that it would be a problem. My boyfriend has a mini deep fryer and makes fried food every once in a while. One of these days I am going to conquer my fear and eat something fried, just to prove to myself that it's not that scary.

It looks so yum even though I can't do much fried food, it kills my stomach.

Can't eat Southern without just a little bit of fried. Love this recipe. Can't wait for the book!

Ooooo that looks good. There is a vegetable stand dude by my house...im going to have to recreate this!

my wife and i really missed your posts while we were gone, and of course upon our return we see again exactly why we love these foods so much :) missed ya!!! :)