Tester Site! And a Stake-Out!

Okay ya'll, I've finally set up my invite-only Cookin' Crunk tester site, where interested folks can drop by and test the recipes I've developed for my Southern vegan cookbook. If you're interested in becoming a tester, email me at tofuwitch[at]yahoo[dot]com with your email address and I'll send you an official invite.

In other news, my vegetarian group (Food Awareness) got together on Sunday for a veggie lunch and "stake-out." Vaughan ordered some cool yard signs that say "Meat Is Killing Your Health, Our Environment, and Billions of Farm Animals: Learn and Improve with Local Volunteers" and it also lists our website, FoodAwareness.org. 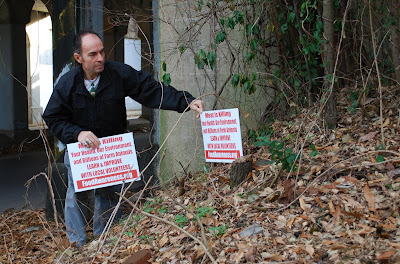 Vaughan stepped in dog poop after placing these signs!

We placed the signs on abandoned lots and near stop signs and intersections. Since there's a city ordinance against this, they'll likely be taken down. But maybe some will stick around and make an impact. 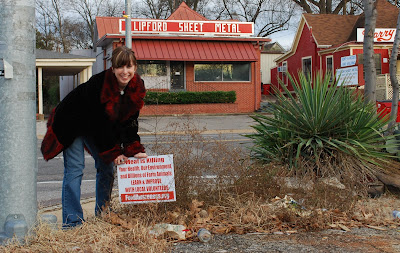 I'm placing a sign near a busy intersection. Luckily, there was no dog poop here.

Before the stake-out, we met for lunch at the Young Avenue Deli, a hip music venue/deli with a large selection of vegetarian options and plenty of good beer. I had the Super Veggie, a pita wrap with roasted red peppers, artichoke hearts, black olives, sprouts, and hearts of palm: 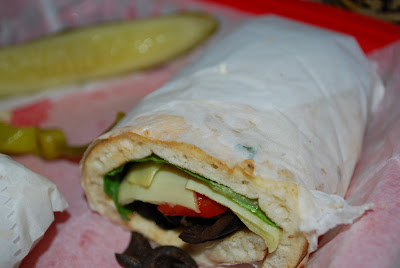 It was okay. The veggies were a little bland, could have used a stronger marinade. But the Deli's World Famous French Fries are out of this world good: 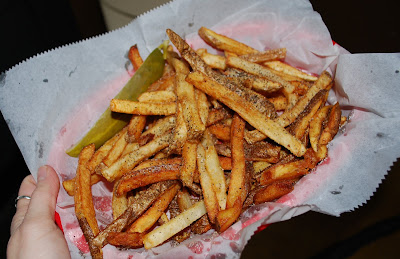 Their fries have won several awards and they serve enough in a small order to feed an army. I could live off of the Deli's fries.

Don't forget to e-mail me if you wanna join the tester site!
Posted by Bianca at 11:03 PM

Awwww, you guys are awesome with your signs. And those fries look incredible.

I sent you an email because I definitely want to be a tester!

Yay for testing your recipes!!! I can't wait for the book =)

Great job with the signs, it's amazing what you are doing.

Oh and cute new picture on the sidebar btw!

#2. very cool on putting out those signs! i love it! i would think they'd get people's attention, for sure! and maybe some people who read them start to think about meat and how awful for everything it is. i'm keeping my fingers crossed that the signs stay around for a while!

#3. sorry your wrap was a bit disappointing. but you're right - the fries look sooooo good! i'd totally gobble up a basket or two. hearts of palm, yeah? still haven't tried those. but i totally want to. maybe i'll pick up a jar/can next time i'm in the store.

#4. just e-mailed you about be'n a tester! superexcitedface! thanks, Bianca!

Cute new photo and props to putting out signs!

That is so cool about the signs. I think people will definitely notice them... whenever I'm waiting at an intersection I enjoy reading whatever is around me.

And how cool that you're opening up to testers! This must mean that you're close to having all your recipes figured out?

Just sent you an e-mail to join :)

Great job on the signage, I love it!

I love how you're raising awareness with the signs! :0) Oh myyy those fries look amaaazing...it's been way too long since I've had a GOOD french fry. Yay congrats on the cookbook!! I'm definitely about to email you! :0)

Good luck on getting the word out about your Food awareness group! I'm going to check your web link out now.

Yay! Go you with your awesome activist self! I also love your new picture on the sidebar :) Are you gonna use it for your author page?

love the signs :) poor vaughan for stepping in the poo!

loving your new picture too, so cute!

Try the sweet potato fries. I moved away last year and I still miss them.