My mom makes the best cornbread dressin' on the planet. And I'm not just sayin' that cause she's my mom. It's a proven fact. Everyone who's tasted her dressin' has said it's the best. When I made the decision to go vegan the day after Thanksgiving in 2004, one of my biggest concerns was the fact that I'd never be able to eat her dressin' again.

But thankfully, the following Thanksgiving, my mom figured out how to veganize it with homemade vegan cream of celery soup in place of the canned stuff in the non-vegan version. Now on Thanksgiving, "my" dressin' tastes way better than the old kind. Unfortunately, my mom isn't really the type that writes down recipes.

I had to go to a Winter Solstice potluck yesterday, and I really wanted to try my hand at Mama's Dressin' and in the process, record a recipe for my cookbook. Here's what it looked like: 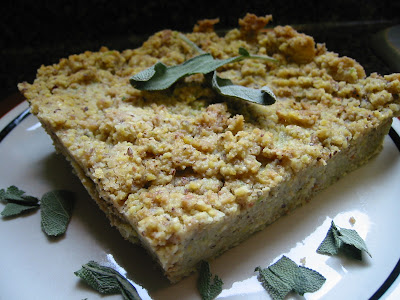 I used my own cornbread recipe (that's also going in my cookbook) and made a triple batch since I knew there'd be about 30 people at this potluck. The result: Good, but not as good as mama's. I think I need to tweak my cornbread recipe because, as it stands now, it contains a lot of flax in place of eggs. The result when making a larger batch (and thus using more flax) was a little more gummy that I would have liked. So next time, I will use egg replacer instead of flax and see what happens (that's what my mom does in her vegan cornbread).

But it was still really good. And the leftovers were excellent served alongside the Garlicky Sauteed Kale with Tahini Sauce from Vegan with a Vengeance: 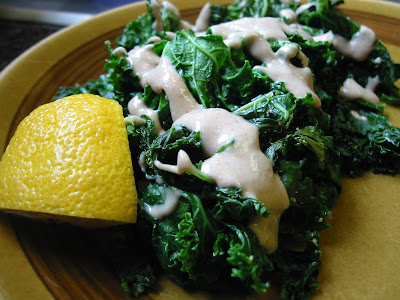 Though I've seen this dish on numerous blogs, it was the first time I'd tried tahini sauce on my kale. And now I doubt I'll ever eat kale without it.
Posted by Bianca at 9:21 PM

that looks SO yum!

Mmm, everything looks good! I want some cornbread dressing!

I get dizzy whenever I see a picture of such a tasty kale. I'm hooked!

Oh yum!!! That looks fabulous. And I have never tried tahini on my kale...maybe I'll pick some up next time I go to the store.

I love dressing - especially cornbread dressing, and with that kale?! Looks delicious.

Okay, confession, i had to look up dressing because i thought it only referred, to like salad dressing! i had no idea it also meant something akin to stuffing! i feel so silly and unsouthern. haha anyways, it looks delicious!

I LOVE dressin'. I vegetarianized my Grandma's recipe and it's great, but I've never been brave enough to veganize it. Yours looks great! And that Kale! Yum!

hmmmm. cornbread dressin'. it's been a while since i've had that! garlicky kale is one of my favorite recipes to make from VWAV because it's so easy. now that gardening season is over, i regret not freezing more kale because i'm out.

ps-thanks for all the kind words. i do feel better. just empty, if that makes sense.

Your mom is totally awesome. I never heard about cornbread dressinf before, but now I want some.

that's so awesome that you're veganizing your mom's cornbread dress'n! mmmmmmmmmmm! sorry it was a bit gummy - it looks super stellar though, Bianca! i've never had cornbread dress'n before - and now i feel like i might have to make some! hot damn!

isn't kale + tahini the best ever? just had the combination last week (Alice's recipe) - and i agree, i'm not sure i'll eat kale without tahini again! it's so glorious!

I'm glad your kitty is OK! What a huge relief!

I'd love to taste that cornbread dressing.. and I LOVE kale with tahini sauce..

Yum! I should really try that tahini sauce on kale, I've been happy with plain sauteed kale and never really thought to try the dressing!

What a good idea! I've always been so wishy washy about kale, but kale with tahini sauce sounds verrrrry appetizing.

I also just looked at your profile and the exact second that I read about you living in the land of Paula Deen, I heard her "hey ya'll, I'm paula deen" on the tv (advertising bacon or something); so funny!

I'm getting out VWAV to try that kale recipe!

sorry... I said I was glad your kitty was OK.. and I remembered it wasn't your cat! oy..

I'm thrilled your dog is OK!

Gosh, what I wouldn't do for some nice warm cornbread right now...

Bianca, I can't wait for you to unveil the dressin' recipe! I used to love dressin growing up in SC. I haven't had it in ages. And that kale looks divine!

tahini ♥ kale. but the question is, are they sitting in a tree?

Ha! Your mom likes to wing-it too! :P

It's hard to beat a good southern cornbread dressing, and I can imagine your mama's was so good. Your kale, which sounds delicious, reminded me of a soup I made last winter with kale and tahini in it. I need to find that recipe...

You are my hero! As a fellow southern vegan girl with a true love for cornbread dressing, your recipe came just in time to save the holidays!