My belly was totally pleased with this Raw Steel Cut Oatmeal with Apples, Cinnamon, and Raisins: 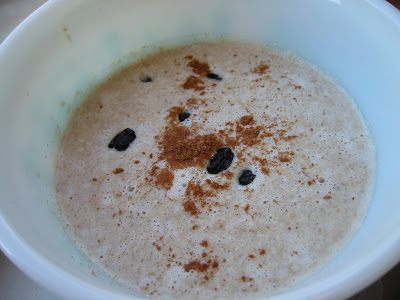 I adapted it from a recipe in Jennifer Cornbleet's Raw Food Made Easy. She used oat groats, but I only had steel cut. So I soaked them for two days, and then blended them with a 1/2 cup of raw almond milk, an apple, 1/2 tsp. cinnamon, some maple syrup (probably not raw, but the book recommended it), vanilla, and a pinch of salt ... oh and added raisins in the end. It's not all that pretty, but it tasted great.

For lunch, I ate a Giant Garden Salad with Agave Mustard Dressing: 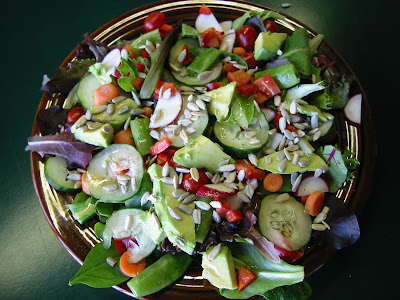 There was a crap ton of veggies in this salad — carrots, cherry tomatoes, radishes, cucumbers, red bell pepper, and avocado (I also intended on adding mushrooms and green onion but accidentally left those at home when I went to work this morning). The dressing recipe was also from Cornbleet, but I substituted raw agave for the honey in her recipe.

For my pre-workout snack, I thawed out a few Raw Brownies that I made and froze during last month's raw day. They were perfect crumbled up with a banana. 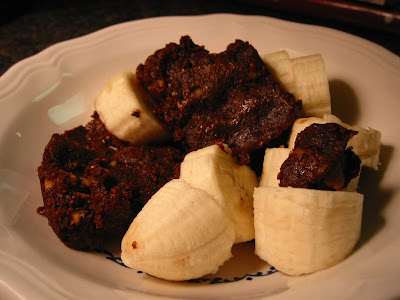 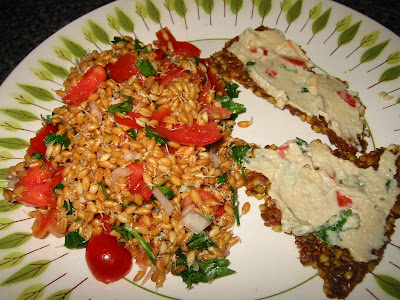 Sorry for the crappy flash photo, but my borrowed camera doesn't do well with low winter lighting.

The tabouli was made from sprouted wheat berries, which I sprouted in a jar in my pantry for two days. It was yummy! And it went great with the cashew cheez spread on buckwheat crackers. The cashew cheez (made with cashews, red pepper, cilantro, onion, and garlic) is hands down my favorite raw dish, followed closely by raw garlic "mashed potatoes" (made with cauliflower). Crap, now I'm craving raw mashed potatoes ... ah, maybe next time.

BTW, ya'll please think happy thoughts about my doggie Datsun! He's having surgery in the morning to remove a tumor from his tail. We don't know yet if it's a bad tumor or a benign one, but just think positiveness! 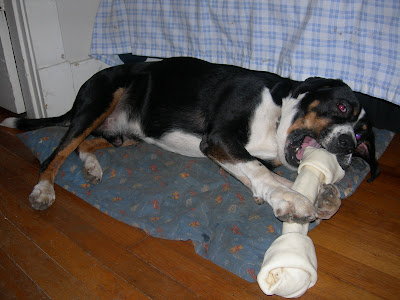 Oh Bianca!
I am thinking happy thoughts for sweet Datsun. He is so cute. What a gigantic bone he has!
good thoughts, good thoughts!

Thinking plenty of positive and happy thoughts for Datsun!!!

That live tabouleh looks awesome. I've not really tried any raw food but it does look really good!

I love when you do raw days! They give me so much inspiration and ideas for my own raw days (which don't happen as often as they should!)

LOVE ALL THE RAW FOOOOOOD!!

Datsun is DEFINITELY in my thoughts.

Sweet thoughts for your sweet pup. He'll be fine, I just know it!
I have never wanted a salad as badly as that one! It looks so amazing. I wish all the fresh goodness wasn't so terribly expensive in the winter...me wants salad!

Datsun is adorable but raw marrow bones only from now on please! That 'rawhide' stuff gets built up in their stomachs over time and causes health problems.

You always make raw food seem so tasty, easy and filling. Not at all what I would think of when thinking raw. I am especially interested in the raw cashew cheez. Sounds great.

Good luck with Datsun -what a cutie by the way!

Yummy raw food! I could also use a cleanse right now, even though we don't have Thanksgiving here!
I'm amazed at the fact that the wheat berries sprouted in only 2 days.

Your food looks beautiful and tasty

I am sending super positive and happy thoughts to Datsun. He is so cute!

Best wishes to little Datsun. I hope everything goes well.

That salad looks so good. I wish I had one just like it for lunch. However, I was running late and will end up eating a veggie burger.

Good luck to Datsun! I hope everything goes well!!!

YAY for raw food day!! That salad is ridiculous. Really, it's too good!
I'll keep Datsun in my thoughts! He's such a cutie!

Your food looks awesome, as usual. I have to try to make my own raw cashew cheese...yum!

Your salad is GORGEOUS! And Datsun is the cutest thing. Sending good thoughts!!

Your raw food posts always look so good! I really need to work on my raw "cooking." I hope Datsun does well tomorrow - what a cutie, and he looks so happy with that bone project he's working on.

I hope your dog will be okay and its not serious. This monthly tues. raw days sounds like a great thing to do for the body

i am totally going to try something like those raw steel cut oats - they sound sooooo tasty - and i think they look super tasty, too! maple syrup = mmmmmmm!

jeebus, Bianca - you always make the best look'n salads! seriously. my body is like "you should make a gigantical salad of gloriousness like Bianca's for lunch!" and sadly all i've got at home is leftover lentil soup. sadface!

more raw brownies with a baneenie (that's what dan calls 'em) = delicious! and i think the photo of your meal looks as tasty as can be - a helluva lot better than what i could shoot with flash. my camera = the suck with flash. argh! and i love your plate, too! the little trees are the best!

i need to plan ahead and do a raw day soon, too. i too think my body hates me for all the ridiculous amounts of crap (delicious, delicious crap) i ate for thanksgiving! ugh! :)