Food tastes better when it rhymes. That's what inspired my latest cookbook creation. But really, it just so happens that pecans and dijon mustard taste great together. I found that out tonight when I ate my first batch of Dijon Pecan-Encrusted Tofu: 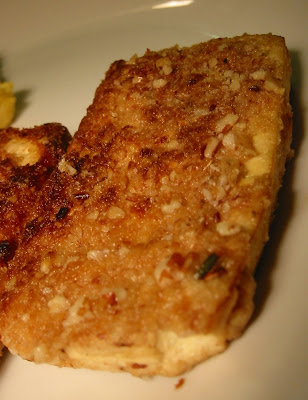 Now, the picture doesn't really do this dish justice. My borrowed camera doesn't do well in low lighting, so I had to use a flash and it's out of focus in the foreground (which bugs the crap out of me). But the tofu was marinated in a "chicken" marinade, dipped in a dijon sauce, and breaded with pecans, flour, and thyme. Then I fried it up. Though the coating was very tasty, I think texture-wise, this breading would better suit a batch of seitan. So I'll try it again soon with seitan before adding the recipe to my cookbook files.

Speaking of my cookbook, I'm setting a New Year's resolution to finally set up a tester site. I've been creating and filing away recipes for almost a year, and it's time to set some testers loose on this stuff to make sure I don't have some crazy palatte or something. I'll keep ya'll posted.

I served the tofu with some Road's End Organics vegan mac and cheese, courtesy of Lindsay's awesome care package. 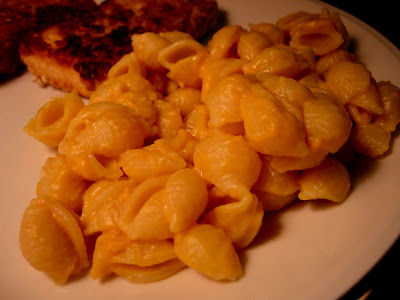 Sorry for the god-awful picture...

I love this stuff, but don't buy it often enough! Tastes like creamy, noochy mac without all the time spent making a nooch sauce.

And I also roasted some Brussel Sprouts: 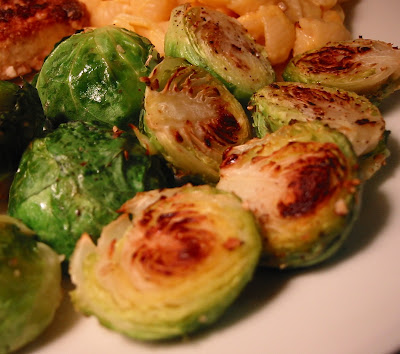 Honestly, these could have cooked a little longer. I was in a huge hurry to go Christmas shopping before the mall closed (it's a 20-minute drive out to the suburbs), so I rushed the sprouts. But I left the rest in the oven while I ate, so my leftovers will be much better tomorrow. 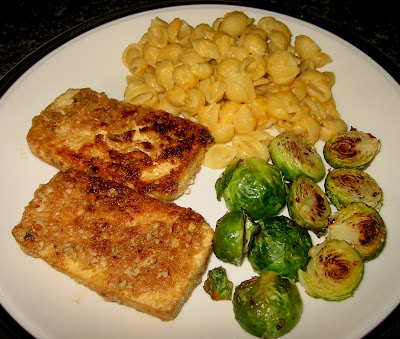 DOGGIE UPDATE: As most of you know, my doggie Datsun had a tumor removed last week. His doctor called me on Monday to let me know that his biospy came back and, in the great words of Arnold Swarzenegger, "It's not a tuma." It's some kind of benign lump thing with a long medical name. So yea!!! Thanks for all your positive words and thoughts!
Posted by Bianca at 11:14 PM

Its like you cooked up all my favorite things! That meal looks AMAZING!

That's great news about your dog, you must be so relieved. :)

And if you need testers, count me in!

Pecans? What a perfect topping for tofu! One of my favorite nuts. I'm so glad Datsun is fine. Great news!

That entire plate looks sooo good. I definitely haven't been eating enough tofu lately; I want to try this now!

WOW! That tofu looks mouth-watering! And those sprouts...yummy! I sometimes do that with roasted veggies if I can't wait to eat them haha

That tofu sounds spectacular! Glad about the tuma news, too (My little canine invalid can commiserate). :)

Hey,
I'm glad your dog is ok, thats such good news I don't know what I would do if one of my cats got sick. They become family after awhile.
Your dog Datsun looks exactly like a male version of My moms dog Lola, you you happen to know what breed he is? We've been tryng to figure out what breed she is for a long time now.

Pecans are great (and very expensive and difficult to find here!), so I can imagine that the tofu tasted very good, and I would've never thought of pairing it with dijon!

And I'm glad your dog's OK!

I am glad Datsun is okay! Please keep me in mind for testing!

Yay! I am so happy "it is not a tuma". I was worried about him. The tofu looks freakin' awesome.

thanks for the kinds words-(i'm still not with it yet), and i'm glad your doggie is okay. that food looks good!

hooray for Datsun's tumor being benign! that's so awesome, Bianca! makes me happyfaced!

your dijon pecan encrusted tofu looks super awesome to me! it looks perfectly encrusted & cooked! add a side of mac 'n cheeze & brussels - that's one plate of gloriousness right there. hot damn!

keep us posted on the recipes & testing! i would love, love, love to be a tester for all the yummies you create! i don't think your palatte is weird - your foodz always sound rock'n to me! yay!

2. I never really like the baked/fried slab tofu recipes I try. No matter how good the outside is, the inside always just tastes like hot tofu. Wonder what the secret is? Maybe I'm just a seitan kind of lady.

Ooh that tofu looks divine! You have all of my family favorites on your plate. :) I can't wait to hear about your testing site.

Great news about your dog. :-)

The recipe that dh used for the cheese sauce is Chick-E-Cheez Sauce on pg 55. He made me almond cream cheez today. It isn't that bad.

First, I couldn't figure out how dijon and pecan rhymed...now I get it. I just had to say it in southern, y'all.
Looks great!
Glad it's not a tumah!

Glad to hear Datsuns okay. That must have been some huge relief for you.

It's nut a tumah!!! Hourrah! Gladd to hear Datusn is ok.
Dijon & pecans - sounds too good! Let us know how it works with the seitan!

Great news about Datsun!! I'm so happy and relieved. Cheers!

your food looks AWESOME!! i love dijon anything, and your tofu is basically making me so hungry haha.
i'm really excited about you working on your cookbook, i'm sure it'll be soo amazing. :)
and i'm so happy to hear about your dog, what a relief!

And what are you talking about, the picture doesn't do the food justice? It looks good enough to eat off the screen!

-CCV (Who will never forgive you for ruining how I look at squash haha... just kidding. I still love you and think you are hilarious!)

Mmmm...this is all look SOOOO delicious! I am also guilty of undercooking spouts, not enough patience :)

Testers? Did I hear you mention testers? Why, of course I'll be a tester for you! It was so sweet of you to ask for me specifically! ;)

That's my ideal meal right there - something crispy and fried, mac & cheez, and something green. The new tofu coating sounds really good. And hooray for Datsun!

I'm so glad to hear the good news about your sweet doggie. What a relief!

I think the mustard and pecan would be fabulous on seitan. I'm keeping watch for your call for testers.

hooorah!
so glad that Datsun is tuma-free! The tofu looks fantastic!

Yay for rhyming food, cause that sounds DELICIOUS. And I'm so glad your doggy is okay!

PS I wanna be a tester!

Bianca! So glad to hear about your pupmaster! I admit that the idea of pecan tofu didn't grab my tummy at first, but it does look amazing! And I trust any/all of your recipes!

That is my favortie movie.

Glad your baby is better.

Well, I have to say that picture had me drooling before I even read your description... can't wait for more pictures and eventually the book!

Holy crispy tofu, Bianca!! Brussels sprouts always look so good roasted, but I'm scared of them! I must get over this silly sprout fear!

OMG, Dijon, Pecan Tofu? Sounds too good to be true.

Oh man, that looks soooooo good.....I'm actually sorry that I'm going out to dinner tomorrow night because I want to make it right away! :)

These all look so good. If you would like a tester just let me know. I enjoy testing for fellow bloggers!

You're my girlfriend and you've had this site for over a year. And this is the FIRST time I've commented! LoL I miss my kitties. :( I'm sure I'll see them soon enuff tho. Well, see you Thursday! Love you! :)

I LOVE BRUSSEL SPROUTS. I eat them as a snack all the time. With apple cider vinegar. Mmmmmmmmmmmm.....