I'm not Jewish, but sometimes I wish I was. They get EIGHT days of celebration for Hanukkah and let's face it, dreidels are pretty darn cool. So are matzo balls and latkes. To celebrate the first day of Hanukkah on Monday, I made the Autumn Latkes from Veganomicon: 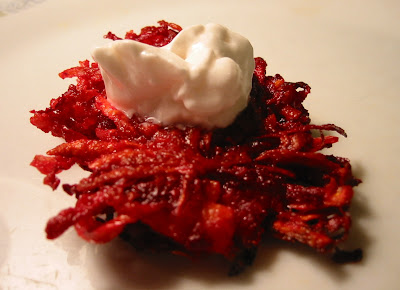 Shown here with a dollop of Tofutti sour cream, these babies are far from the traditional potato latkes. They're made with shredded beets, sweet potato, and carrot. I needed to use up some sweet potatoes and I knew these were good (it was the first dish I tried from VCon when I got it last Xmas), so it seemed an obvious choice.

I also whipped up some Apple Sage Sausages from a recipe I found on Get Sconed! 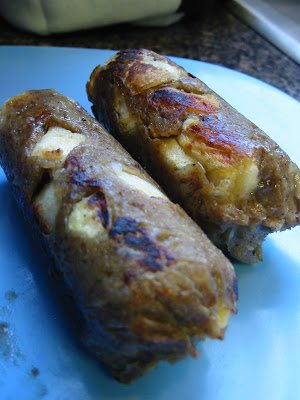 The recipe originated on the PPK from Jayne (aka Virginwithamemory or VWAM), but it's reprinted in full on Jess' Get Sconed site. They're gluten-based sausages steamed using the Julie Hasson method and get their awesome flavor from dried sage, dried apples, and a bit of mashed potato. These have been perfect for breakfasts this week with leftover Fruitcake Muffins (see last post).

Finally, I've been giving out Xmas gifts of homemade Chocolate Fudge from The Joy of Vegan Baking: 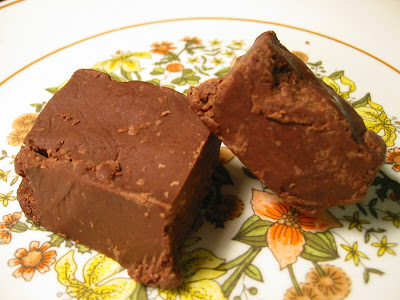 All I can say is, WOW! I'd never made fudge before, but it's super easy and this s

tuff tastes just like the non-vegan fudge I remember. It's very rich, and really addictive. I can't stay out of it. But who cares? It's the holidays.

Speaking of holidays, I'm fixin' to sit down with a cup of soy nog-spiked coffee and watch Earnest Saves Christmas for old time's sake. I'll going to be parents' house tomorrow for gift time, followed by Xmas breakfast at Granny's, and Xmas with my boyfriend's family in Clarksville.

Hope you enjoy xmas Bianca! I need to try those latkes! Maybe for the last day of the festival of lights....

happy holidays to you, dear Bianca!

All of that holiday-inspired deliciousness...love it! Have a wonderful holiday with your family Bianca!

Now that I've discovered the joy of latkes, I must try those!

Have a wonderful holiday! :)

Merry Christmas Bianca! I hope you have a wonderful holiday!

My little brothers have been watching Blues Clues with features a draidle on it so they keep asking to play with one. We are not jewish what so ever! haha

Wow latkes! I love them but can never seem to get them right, I always end up with a burnt mess of a pan. But yours look wonderful and I like the change-up from traditional flavors.

Yummy fudge! You are too sweet! I hope you have a wonderful holiday Bianca!

Whoa, that fudge looks awesome! I thought about making it, but the double boiler thing intimidated me. You've inspired me to probably try it, though! I'm going to attempt the cinnamon rolls from JOVB tonight... I've never made anything with yeast so we'll see how they turn out! Your holiday sounds jam-packed but fun, yay! Ours is supposed to be similar, but all this snow in Portland is fucking up all of our plans.

Too funny! I'm Jewish, and of course have always sort of wanted to celebrate Christmas (Hanukkah's really not a big deal past the age of 10 or so.) Your latkes look great!!

This whole post literally made my mouth water. I want those sausages!!! And the latkes. YUM! Come cook for me, will you? I'm too tired from the holidays to do it myself. :)

Happy Holidays, Bianca! The fudge looks amazing; I wouldn't be able to keep away from it either.

First you throw those yummy latkes at us and then before we can recover you whip out the fudge! Oh the fudge!!

I love Ernest! I made the potato latkes from VCOn for Hanukkah this year. It was my first time making the latkes and with the food processor, it was a piece of cake and so delicious! Those autumn ones look good too though!

i haven't seen Earnest Saves Christmas in AGES! totally takes me back! awesome!

your latkes are gorgeous, the sausages are perfect, and the fudge = mmmmmmmmmm! my sister gave me the Joy of Vegan Baking for xmas - now i know what to make first!

hope you had a rock'n christmas, Bianca! and yeah, i have to agree - dreidels are pretty darn cool! yay!