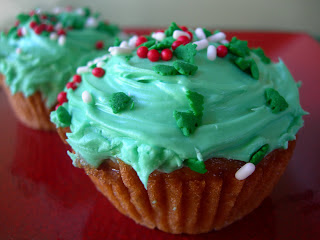 My friend Sheridan and I made these last night using the recipe for Sexy Low-fat Vanilla Cupcakes from "Vegan Cupcakes Take Over the World" by Isa and Terry. It is, hands-down, my favorite vegan cookbook. I got it last Christmas (as a gift from Sheridan) and I've been making cupcakes at least once a month ever since. Cupcakes are awesome! They're cute. And they're small enough to keep you overeating and feeling all fat.

Speaking of fat, I have an embarassing confession. Sheridan and I cheated on these in a bad way. We'd planned on making the Vegan Buttercream Frosting from the book. That's the standard recipe I usually use. It calls for nonhydrogenated shortening and nonhydrog. margerine. We were at my mom's and though she keeps Earth Balance in stock, she can't get nonhydrog. shortening in her small Arkansas town.

So since we were going to be making trans-fatty icing anyway....we cheated and bought Pillsbury Holiday Funfetti Frosting. It's vegan, but it's loaded with trans fat. But since we made low-fat cupcakes, it should all balance out. Right?

Our decision also had a lot to do with these cute Christmas tree sprinkles that came with the frosting. Kroger didn't have special Christmas sprinkles and we didn't want to battle the crowds at Target on the night before Christmas Eve....

Look, I know I'm making a lot of excuses...guilty or not, these cupcakes are really really good!
Posted by Bianca at 3:14 PM

Oh! I love these cupcakes - they are soo adorable!

Also, I couldn't find non-hydrogenated shortening, so I had to use the bad stuff. (Sometimes you just have to take the easy way out, I guess...)

At least your healthy cupcakes + non-healthy frosting evened things out a bit! And they look amazing, too :)

Vegan cupcakes are a lot of fun. They are so sweet and innocent. I made silk eggnog cupcakes (or as I like to refer to them- snog cakes) recently & they too were very cute but I failed to take a pic of them. The recipe can be found somewehre on bakingbites.com
and they are super moist & tasty. It's an adapted version of the margarita cupcakes from VCTOTW.

I wish I'd have thought of silk nog cupcakes! That sounds awesome. Now, I'll have to wait til next Christmas....I have made the margarita cupcakes before. And they were super good.