Last night was the longest night of the year. Every night from now until the summer solstice will bring more hours of daylight than darkness. Yea! To celebrate, I made a creamy Winter Solstice Pumpkin Soup. The recipe came from "Cooking By the Seasons," the same book the not-so-exciting Peanut Butter Pasta recipe came from (see posts below). But unlike the boring pasta recipe, this was very tasty! 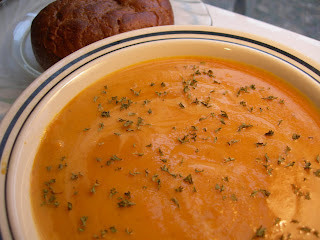 I stirred in a little soymilk once I'd ladled the soup into my bowl. The recipe suggested adding soymilk to the entire pot, but I knew I'd be freezing the leftovers and I've never had a good experience freezing milky soups. The soymilk tends to separate when soup is thawed. And though it still tastes okay, it looks nasty. The soup definately does not look nasty!

I may not be posting as much over the next few days due to the holiday. I'm going to my parents tonight, but expect some lovely cupcakes pictures tomorrow! My friend Sheridan and I are going to have a Christmas cupcake party at my parents' house tonight, complete with vegan eggnog and classic Christmas cartoons. Fun!
Posted by Bianca at 2:17 PM

I really like the thought of cooking according to what's in season & replicating the feel of the season within the kitchen. Cooking by the Seasons sounds cool, I think I'll have to find it somewhere.