I apologize for not posting yesterday. I've been working on cleaning out my freezer, which was stuffed with frozen portions of meals I'd made over the past few months. Tonight, I made pizza! I used the crust recipe and the sauce recipe from Vegan with a Vengeance. It was supposed to make enough for two 14-inch crusts, but I love Deep Dish Pizza, so I used the whole batch for one giant pizza. 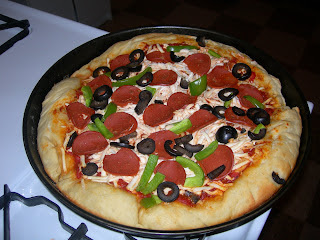 I used Yves Meatless Pepperoni, Follow Your Heart vegan cheese (which sort of melted ... it does better in the microwave), black olives, and green peppers. It was delicious! Fortunately, I've got enough left to eat on for the next 3 days. Some vegans don't care for the meat analogs, but I adore them. I've heard that, over time, vegetarians learn to wean away from them. But I've been veg for 13 years, and I still love fake meat as much as I ever did. This pepperoni was the shit. 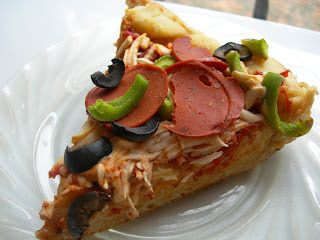 Also, the VwaV sauce recipe was amazing. I used my Granny's homemade canned tomatoes and seasoned with dried oregano, thyme, and chopped fresh garlic. Also added olive oil and tomato paste. I think this is the best vegan pizza I've ever had. Seriously.
Posted by Bianca at 1:35 AM