As a long-time vegan, I'm often surprised when non-vegans ask, "So what do you sub for eggs in baking?" It's easy to forget that eggs are such a staple in non-vegan cooking and baking. But they still are, and most people don't realize that eggs are completely unnecessary! There are about a million ways to sub for eggs — flaxseed, silken tofu, bananas, applesauce, the vinegar/baking soda trick, powdered egg replacers, aquafaba.

The powdered egg replacers are all slightly different, and they work in different ways. But in my experience, they all work pretty well. Same goes for The Neat Egg, a powdered replacer made from chia seeds and garbanzo beans. 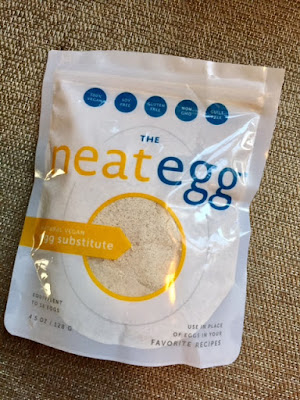 Neat sent me a couple of their products to review (their vegan meat substitute and their egg replacer). I tried the egg replacer this weekend, and I'll be sampling the meat sub later. So I'll review these in two different posts. My dad's 63rd birthday is Monday, so I used The Neat Egg this weekend in some birthday cupcakes! He requested Chocolate Peanut Butter Cupcakes, so that's what he got! 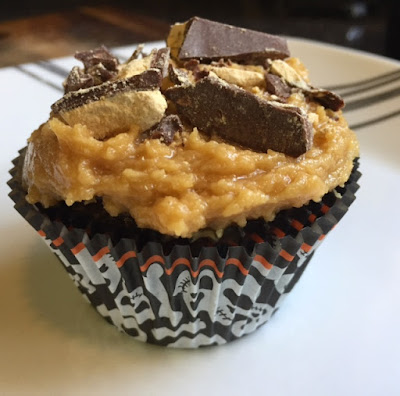 I typically use the chocolate cupcake recipe in Isa's Vegan Cupcakes Take Over the World. It's a no-fail recipe that uses the vinegar/baking soda egg trick. But since I wanted to see how The Neat Egg would work, I picked a non-vegan cupcake recipe online and subbed it out. I went with this recipe for Chocolate Peanut Butter Cupcakes on Gimme Some Oven. 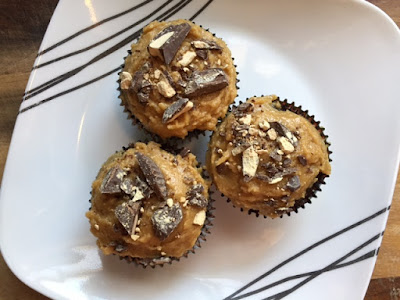 The base is a simple chocolate cupcake, and the frosting is made with a ton of peanut butter, a little vegan butter, and some powdered sugar. The Gimme Some Oven recipe suggests adding mini peanut butter cups inside the cakes, but my last experience with added chopped candy bars to cupcakes didn't turn out so well. The candy sunk to the bottom, and the cakes were all droopy. So instead, I chopped up some Justin's Dark Chocolate Peanut Butter Cups (yes, they're vegan despite what the package says) and sprinkled those on top.

The Neat Egg is a fine powder that looks like this. 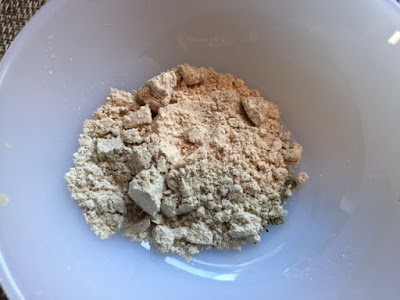 One tablespoon of The Neat Egg mixed with two tablespoons of water equals one egg. It gets thick and eggy, just like flax eggs. And it worked beautifully in the cakes. They rose well, had a moist texture, and held together. But I do have one small complaint. Because The Neat Egg is made with garbanzos, it gave the cake the slightest gluten-free flavor despite the fact that this wasn't gluten-free. You know that chickpea flour taste? It's there. 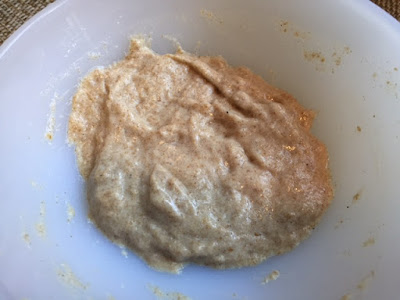 Anyway, it was only noticeable before the cake was frosted. Once the sweet peanut butter was spread atop the cakes, that overpowered any beany-ness. I'd definitely recommend using this in something that will either be frosted or in a baked good that should taste a little wholesome, like a banana bread or a bran muffin.

If you want to make this recipe using The Neat Egg, here's the link. My vegan substitutions included using The Neat Egg equal to 2 eggs, using almond milk with a tablespoon of apple cider vinegar in place of the buttermilk, and using Earth Balance and almond milk in place of the butter and heavy cream in the frosting. Also, I didn't use mini PB cups inside the cakes, but Justin's does make a vegan mini cup if you want to try it!
Posted by Bianca at 9:00 PM

Awhile ago I bought some gluten free bagels that were made with garbanzo flour, and they tasted so strongly of the flour that I couldn't enjoy them.
The cupcakes look amazing though, and I'm glad the icing covered the bean-y flavor!!

In a podcast there was a whole discussion about how you can't make cookie dough without eggs (you know to eat it raw) I almost lost it lol. I thought the egg was to hold the dough together when baking? XD