I spent the weekend at the second annual Nashville VegFest, where I did a cooking demo and signed copies of my cookbook, Cookin' Crunk. It was loads of fun, and the turnout for the two-day fest was massive. Here's my recap.

When I arrived on Friday night, Paul and I joined Ellen Jaffe Jones (a fellow Book Publishing Company cookbook author) for a Gentle Barn fundraising dinner in nearby Arrington, Tennessee. You can read all about that dinner (and meet Adeline the rescue turkey) in last night's post. Ellen and I were sharing one half of an Air B&B duplex, and our publisher was on the other side. Our publisher — Book Publishing Company — is super-awesome, and they always find us lodging with a full kitchen so we can do any demo prep needed. This year, Ellen was speaking (not demo-ing), so I had the run of the kitchen myself.

I did a little prep on Friday night, since my demo was bright and early on Saturday morning! Here's the line-up of Saturday speakers (my name is misspelled but whatevs!). 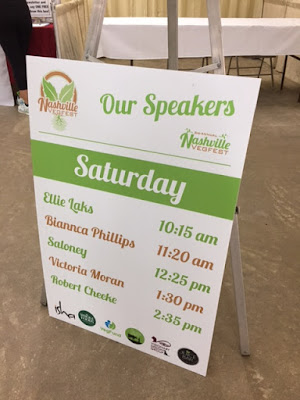 I made my BBQ Tempeh & Carrot Sandwich mix with Creamy Poppyseed Coleslaw (served with spoons rather than bread because that's easier for samples), and I made some Tofu Eggless Olive Salad. I didn't get any demo pics since Paul couldn't come to the fest on Saturday (I usually make him play photographer). My cousin Tiffaney lives in Nashville, and she's vegan too. She came out to my demo, which is awesome because it's been a few years since I've seen her! 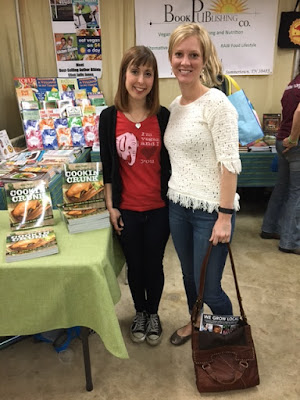 Here's me and Ellen, pimping our books at the Book Publishing Company table. Ellen's latest book is Vegan Fitness for Mortals. In her talk on Sunday, she held a plank contest, challenging the audience to hold a plank position longer than her. I'm pretty sure she won that contest with a record of more than six minutes! 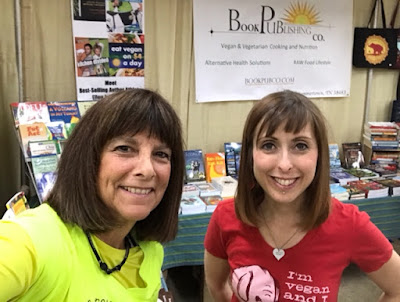 Speaking of fitness, vegan bodybuilder Robert Cheeke's booth was right next to ours. This guy is so awesome! He was a speaker as well! Sadly, I missed his talk because I needed to stay at the Book Pub Co table for awhile. 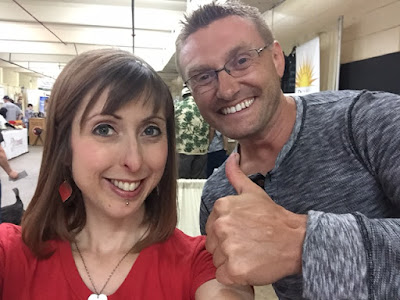 After my demo on Saturday, I was starving. There were samples all over the fest, but I needed a solid meal. So I opted for an Ethiopian Platter from Amy's Ethiopian. They were selling these at the fest. SO GOOD. Pretty sure injera and wats are my fave foods. 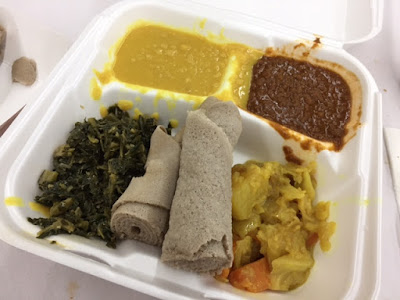 After lunch, I grabbed some dessert from the Revolution Gelato booth. All-vegan gelato! 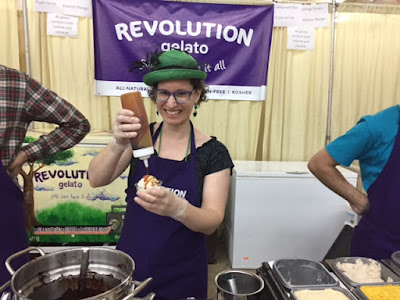 I got Cardamom Kiss with Salted Bourbon Caramel. Mmmmmmm. 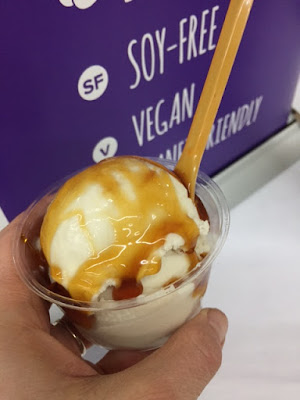 Adeline was at the fest too! She wandered around greeting people all day Saturday and Sunday. 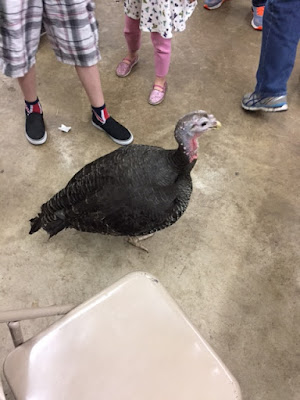 Since I wasn't speaking on Sunday, my day was much more relaxed. Paul wasn't able to make it to the fest on Saturday because he had to work. But he was there Sunday! 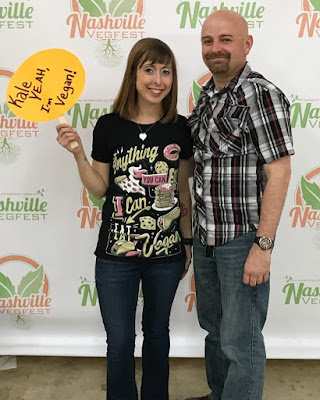 We caught Gene Baur's talk first thing Sunday morning! The Farm Sanctuary founder is such an inspiration. I actually got to chat with Gene for a good couple hours at dinner on Saturday night (but more on that in tomorrow's post!). 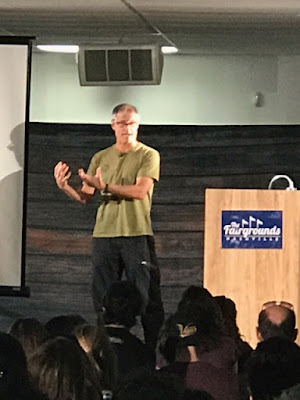 Paul and I spent most of Sunday at the Book Pub Co table, where Ellen and I continued to sign books!

I met Victoria Moran of Main Street Vegan at the fest. She was a speaker as well, and she was so very sweet! 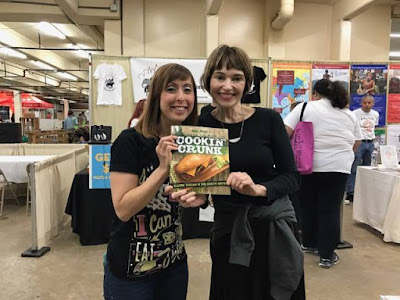 Mid-morning snack on Sunday was more gelato! This time, I went with Vanilla Bean Gelato and Hot Fudge. 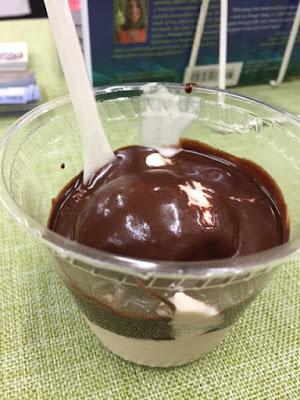 For lunch on Sunday, I waited in a very long line for tacos from Succulent Vegan Tacos. Sadly, while I was in line, they sold out of seitan tacos and potato tacos. 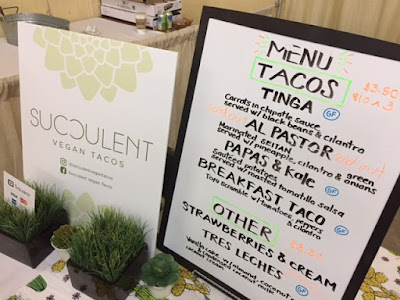 But they still had Tofu Scramble Tacos and Chipotle Carrot Black Bean Tacos. Both very good! Paul got BBQ Sliders from the Sunflower Cafe booth, and I ate half of one of those too. 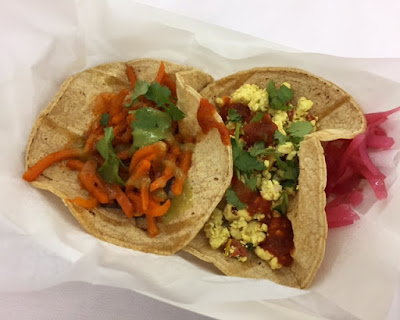 We had a great time, and I brought home way too many souvenirs — new tees and stickers from Herbivore and Compassion Co., I Love Tofu running shorts from Action for Animals, plant meats from No Evil Foods, Hempeh from Smiling Hara. Yay for Nashville VegFest! Here are my new running shorts, put to the test last night at an I Love Juice Bar fun run. 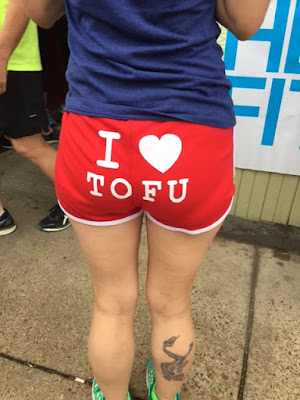 Tomorrow, I'll share pics of what I ate outside the festival!
Posted by Bianca at 9:00 PM

You got to meet Robert Cheeke and Gene Bauer!! I would probably not be able to speak at all! Still not as cool as meeting Adeline, but pretty close! What an amazing weekend!! I'm sure your demo and samples were a smashing success. I love Ethiopian food, I need to find some now I have a hankering!
I love your I love Tofu shorts! And I love that Paul came on Sunday, very sweet!

What a fun experience! How cool that you got to meet all of these amazing people. I wish I could have seen your demo but maybe someday! I'm sure it was wonderful. The gelato looks seriously amazing. I'm glad that you had a day to relax and enjoy the festivities. The shorts are adorable! Glad you had such a great time!

I LOVE those shorts! Robert Cheeke seems like such a nice guy. One time I won a FB giveaway that he threw, and when a package addressed to me from Robert Cheeke showed up on our doorstep, I audibly squealed like a dork. He's just one of those vegans that I've been pretty aware of since I went vegan well over a decade ago so it was really fun! Anyhoo, that looks like a super fun VegFest!

Wonderful fest and fun! LOVED seeing the pictures from it!

I purchased your cookbook at the Atlanta, GA vegan Fest. I made the bbq ribs and your Memphis BBQ sauce my husband and I was doing the happy dance sooo good. Can't wait to make more recipes for your great "Cookin' Crunk cookbook