Full disclosure: Mellow Mushroom provided a $25 gift card so I could sample and blog about a few of their vegan items.

I remember, years ago, every time I'd visit Nashville, I wanted to eat at Mellow Mushroom in the West End. They had vegan tempeh hoagies, and I was obsessed with them. This was before Nashville had any totally vegan restaurants and before Memphis (where I live) had a Mellow Mushroom location. Mellow Mushroom was a vegan pioneer back in the day.

And when Memphis got its first location in Germantown, I was STOKED. That original location is about 40 minutes from my house, but the drive was so worth it. By then, Mellow Mushroom had vegan cheese pizzas, and that was life-changing. Fast forward a few years, we got a second location on Park Avenue that cut the drive time in half for me. It's since become a favorite spot when I'm craving vegan pizza!

While Mellow Mushroom has long had vegan options, they've recently added a vegan section to their menu to make ordering a breeze. And like most restaurants in these pandemic times, they've added online ordering as well. Paul and I stopped by the Park Ave location after a 3K trail race on Sunday for some much-need post-run pizza. I ordered the Vegan Veg Out Pizza. 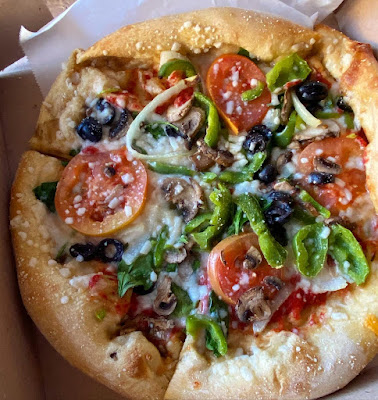 When you order this as the Vegan Veg Out, it comes with Follow Your Heart vegan mozzarella, and they leave the butter and parm off crust. It's loaded with all of the veggies every pizza needs — bell peppers, black olives, onions, and tomatoes.

For salads, you can choose from the Vegan Enlightened Spinach Salad or the Vegan Greek Salad. Both are veganized versions of salads from the regular menu. I ordered the Vegan Greek Salad, which is packed with lettuce, tomato, kalamatas, mushrooms, bell peppers, banana peppers, pepperoncinis, onions, and cucumbers. I opted for the balsamic dressing. This was such a nice side dish, and they gave me enough for two meals worth. 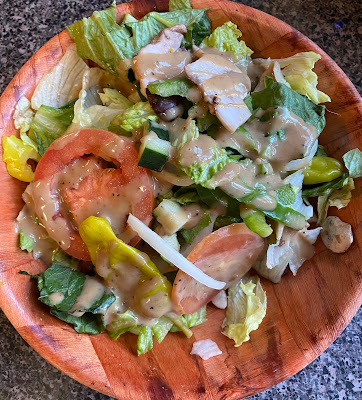 Other vegan options include that beloved Tempeh Hoagie (with vegan mozz, onions, and peppers), hummus with pita and veggies, and soft pretzels with mustard. And of course, you can veganize just about any pizza! I love getting the Thai Dye pizza with vegan cheese and curry tofu. Just be sure to order with no butter/parm on the crust if you're venturing off the vegan menu!

Looks really good. We have one pizza place that serves some pretty good vegan pizzas. They use Daiya on theirs, but it tastes pretty good coming out of their ovens.

Our local vegan pizza joint closed down last month. They couldn't last under the constant closures and changes of Covid. It's too bad because they were really good. They had their own line of vegan cheese. Man, was it good. It was nice to have a totally vegan pizza place close to us.

I love that they use FYH, they make my favourite vegan shredded cheese. Sadly they don't seem to be available in Australia anymore! I think because of damn COVID!

You are so lucky to have all these eat out options! I don't seem to be able to find any good ones locally. Wish we had Imagine, tried their Ranch dressing and it was excellent!

I'm so sad, there was a Mellow Mushroom here in SLC, and I wanted to try it after always reading about them on your blog. Unfortunately they've closed during covid.
Your pizza sure looks great though!!