Local vegan readers! We're having the next No Meat Meet-up Vegan Potluck this Sunday, Oct. 27 from 3-5 pm at the cafe at Crosstown Arts (inside Crosstown Concourse, suite 280). Come! And bring a vegan dish! And now onto today's post ...

The Liquor Store on Broad (yes, that's the name of the restaurant) has been vegan-friendly since they opened a couple years ago. But they're getting more and more vegan-friendly all the time! You can read my Bluff City Vegan Eats post on The Liquor Store here. We had our Memphis Vegan Drinks meet-up at there this past Tuesday, and we were so impressed with all the new options (not all are on the menu, so you have to ask)! Plus, our server and the cook were vegan, and they were very helpful.

They've added a vegan chorizo side, which you can add to any dish. I got my usual — the Cuban Platter — and added chorizo (that's it just to the right of the sauteed veggies). I love this dish so much because fried plantains are the BEST! And the chorizo really stepped this plate up. 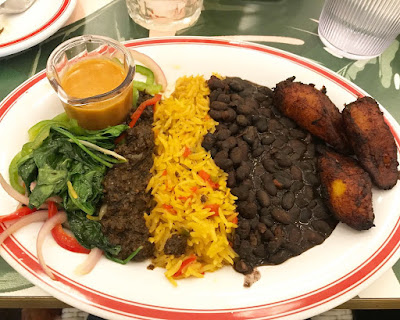 The most popular way to order the chorizo is on the Street Tacos, which several people ordered. Not sure what the sauces are, but who doesn't love a dish that comes with sauces?! I'm definitely trying these next time. 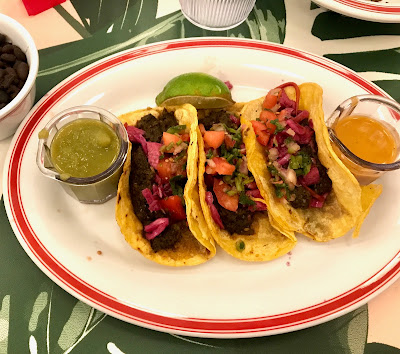 The Liquor Store was the first place in town to offer the Impossible Burger, but back when the Great Impossible Shortage of 2019 happened (thanks, Burger King! Ha!), they switched to a different patty made by Before the Butcher. I haven't tried this yet, but everyone who ordered it loved it and said it was just as good (if not better) than Impossible. Btw, The Liquor Store offers vegan cheese too! 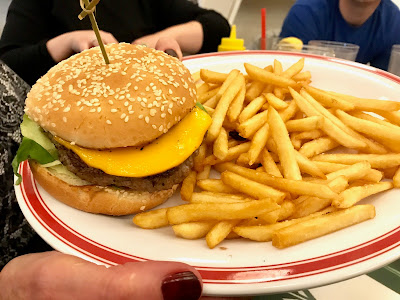 You can even get the Before the Butcher burger on a Patty Melt, subbing out vegan cheese. Clarita went with this option and highly recommended it. 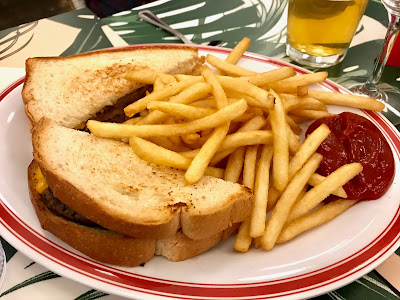 Bonus: We all shared (as an appetizer) the Brussels Sprouts, which are roasted and then drizzled with citrus vinaigrette, toasted almonds, and dried fruit. These were amazing! 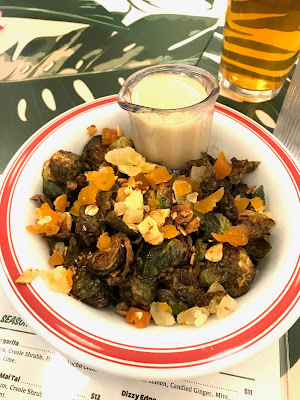 I definitely love a dish that comes with sauces!! It all looks so amazing, I would have a hard time choosing!!!!