The long-awaited JUST vegan egg is finally making its way to stores across the country! We finally got the liquid vegan egg mix at our Sprouts stores in Memphis a couple weeks ago, and I learned about it on Facebook. So of course, I immediately drove out to Sprouts after work, only to find an empty shelf where JUST Egg had been. Clearly, people are very excited.

But last weekend, when I went grocery shopping, the JUST Egg was back in stock! I've been having fun with it ever since. 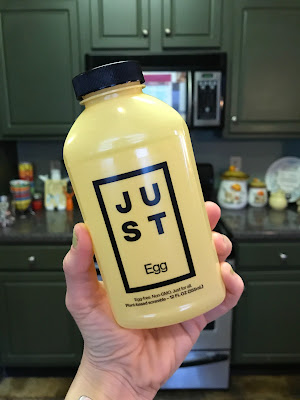 JUST Egg is a liquid made with mung bean protein isolate, and it cooks up just like scrambled eggs. Sure, it's a highly processed food, which I try not to eat too often. But if I had to pick one non-vegan food that I miss the most, it's eggs. Tofu scramble is great most of the time, but it's nice to have something that more closely mimics the texture and taste of eggs. 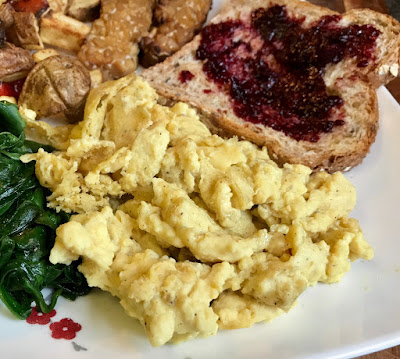 I'm a big fan of Follow Your Heart Vegan Egg, which cooks up perfectly for fluffy vegan omelets. FYH did change their formula a bit, and it doesn't taste quite as good as it used to. But I find it can be doctored up pretty easily with black salt and pepper. However, this new JUST Egg needs no doctoring. It tastes JUST LIKE EGGS (or at least how I remember eggs tasting ... haven't had an egg since 2004). And the texture is spot-on. 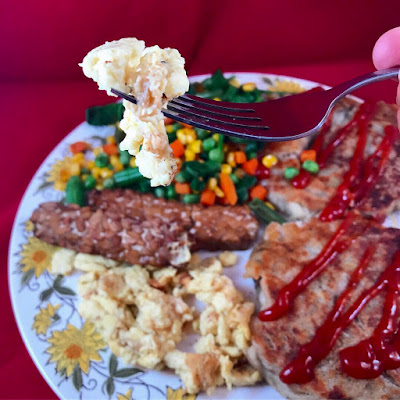 The bottle says 3 Tbsp of JUST Egg equals one serving (or one egg), so that's what I cooked for my breakfast burrito on my first try. But that cooked down to a teensy little serving, too small even for a burrito filling. 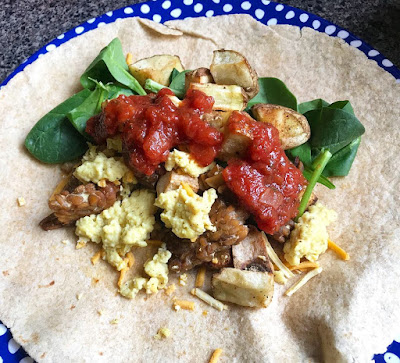 A friend of mine, who has eaten eggs much more recently than me, pointed out that most people don't just eat one egg as a serving. He suggested trying three servings of JUST Egg, so I did that for my brinner plate last night. And it was perfect! 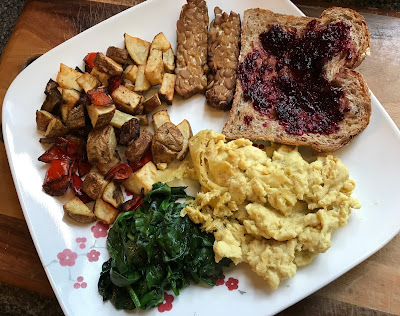 At $8-$9 a bottle, JUST Egg is certainly not economical. Using the 9 Tbsp. I used to get a decent portion took about half the bottle! But JUST Egg would be a great thing to have around as an occasional treat. They'd also be perfect in a recipe that calls for eggs in lesser amounts, like say a vegetable fried rice with a little scrambled egg.

For omelets, I'll stick to FYH Vegan Egg because it cooks up fluffier and is less likely to stick to the pan. I'm so glad vegans now have multiple options for vegan eggs!
Posted by Bianca at 9:00 PM

So excited for this to come to the UK. Here’s hoping that with increased distribution and sales it decrease in price!

Like you I waited a long time to try this and I've been experimenting with it for a couple of months now. My favorite way to use it is in a frittata with a lot of veggies. It bakes up really nicely and I figure the veggies bulk it up and increase the number of servings you can get from one container. My favorite is a Spanish frittata. I've also cooked it in small rounds for breakfast sandwiches. It's been nice to have something so close to an egg again but like you, I still love my tofu scrambles.

It really does look just like scrambled eggs! I haven't tried this or the FYH vegan egg because of the insane price. But it is really, really amazing that there are two egg replacers out there that are so similar to eggs. What a time to be alive and be vegan!

Oh wow, it does look really authentic! It's nice that it doesn't have to be doctored up too. That burrito looks so amazing. I definitely want to try it but it's so pricy. Maybe when I'm feeling splurgy and have a craving for something eggy. Maybe I'll make a quiche or something for quick breakfasts during the week when I do decide to try it. I feel like we have an option for everything now and I LOVE it! I'm wondering how it would taste if you mix the just egg with soft tofu… you'll probably get the taste and texture and get the bottle to go a little further? Maybe?

I saw JUST Egg recently and didn't buy it because I was so disappointed in the VeganEgg. But I am intrigued. I do miss eggs.

How exciting!! It’s so promising that they’ve created such a realistic substitute! I actually stopped eating eggs long ago because i just really didn’t like them anymore and preferred tofu scramble- hahaha, so even if the price was less crazy dunno that i would buy it.
Ttrockwood

Eggs are one of the things I don't miss at all, yet I am compelled to try vegan egg things... for science. ;) I imagine it will be a long time before this comes to Australia, if at all. I have used the FYH egg thing a few times to make scrambles (I prefer tofu) and omelette (I like it for this!). There are a few other brands of vegan egg powders out here as well, though I haven't tried them yet.

The cost is the main reason why I haven't tried it yet. Also because like Susan, I don't REALLY miss eggs. I miss eggs for baking purposes, and having a runny yolk, which isn't what Just Egg is for. lol

At first try I was so gone on the JUST egg but the love decreased and decreased and decreased to the point of rolling my eyes knowing I couldn't just toss the remainder because of how much I paid for it. That graininess and slight sweetness AND the price has nullified it for me and it's been kicked out of my non-egg egg game. FYH? I was SO ticked they changed formulas because really the orig tasted best even if preparing was more than a bit messy. For now, I'm good with scrambled tofu and black salt until another contender comes along.