Happy Fat Tuesday, y'all! I've been celebrating Mardi Gras all day with themed eats, parties, and beer. And I'll have a full report on that tomorrow, but first, I need to catch y'all up with how the Little Rock Half-Marathon went last Sunday.

This was my fourth year running Little Rock (I've done the half there three times and the full once), and it was my sixth half-marathon in total. I'm sooooo glad to be healthy and fully healed after two stress fractures last year. And I was even more glad that my partner Paul signed up to run this race with me. Paul has run three half-marathons including this one, and we've done a number of shorter races together. But this was our first half-marathon together. 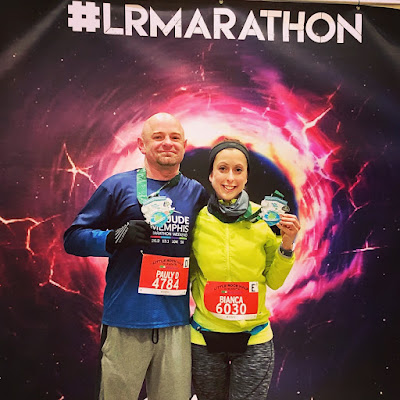 We woke up at 5:30 am at my friend Sheridan & Drew's house in Little Rock and had bagels (with cinnamon almond butter for me and Earth Balance for Paul). Aren't these Mardi Gras-themed king cake bagels by Dave's Bagels the cutest?! More on those in tomorrow's Mardi Gras recap. 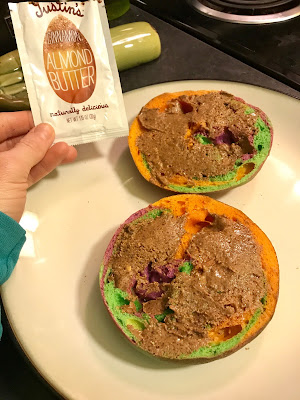 Sheridan (my BFF since 8th grade) is super-awesome and woke up very early to drive us downtown for the race. She lives about 20 minutes away, so she's the bestest for doing this for me every year! It was SO COLD on Sunday (with temps in the low 30s at 7 am when we arrived), but fortunately the Little Rock race offers a warm place inside the Statehouse Convention Center to hang out pre-race. I snacked on a banana while we waited. 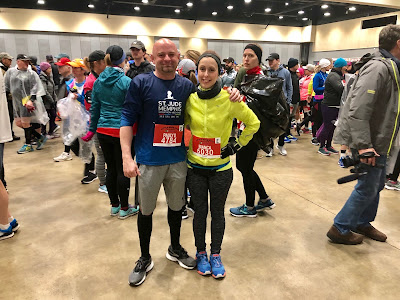 At 8 am, we were off! Not only was it cold, it was also drizzly for most of the race. That drizzle even turned to sleet and then hail at one point! Oh, and the wind! Bitterly cold winds. The weather could not have been less ideal, but the good thing about running is it warms your body temp significantly, so it always feels about 10-20 degrees warmer than it is. Despite the crappy weather, we felt good for most of the race!

We were offered beer samples around mile 9 (thanks Stones Throw Brewing!) and mile 12 (thanks Dugan's Pub!), and we took some mimosa shots from a kind volunteer on the course. Oh, and someone was passing out grilled pineapple around mile 10(ish), and that was AMAZING. A religious group was offering on-the-go communion with bread and teensy wine shots, and while I certainly wanted the wine, the ex-Catholic in me just couldn't do it. Ha!

Paul and I finished strong together! We crossed the finish line holding hands. Paul can run much faster than me, and I told him he should really run the race fast and try to PR. But he didn't get much training in and decided he'd rather take it easy with me in the back of the pack. We finished in about 2 hours and 40 minutes. Pretty far off from last year's Little Rock Half personal record of 2:31, but that's okay. It's been awhile since I've run this far!

After the race, we received our awesome medals! The theme this year was 2019: A Race Odyssey and the medals had a space theme with an alien spinner! 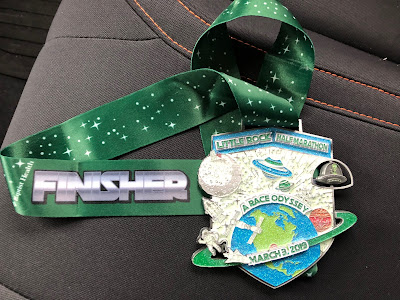 And they glow in the dark! Little Rock is known for having some of the best (and biggest) medals in the country. These half medals are about half the size of the full medals, which are the size of a dinner plate! 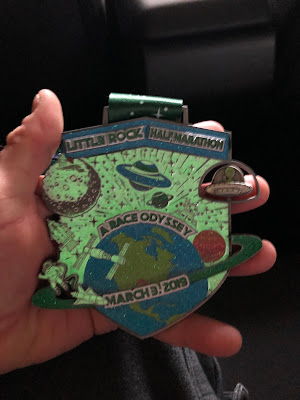 Outside the finishing chute, we were handed food and beer. Most races aren't very vegan-friendly with their post-race options, but Little Rock always offers pasta with marinara. They prepare it with added cheese, but I always ask them to go back in the back and prepare me a fresh cup without cheese. I'm so grateful that they're able to do that! All finishers get two Michelob Ultras, which really hit the spot after a long run. Yay for post-race carbs! 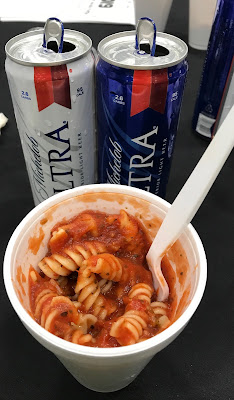 Sheridan picked us up at the post-race party after about an hour. And we headed back to her place for showers. I had a Clif Chocolate Peanut Butter Builder Bar in the car for protein. While I don't believe protein supplements are necessary anymore, I do think you need to get some post-race protein. Protein in whole foods form is always best, but since I was away from home, a bar was my best option.

After showers, we headed out for the real post-race reward! PIZZA!! We went to Mellow Mushroom, where I ordered a Jerk Tempeh Pizza with vegan cheese, spinach, mushrooms, and bell peppers. Hit the spot! 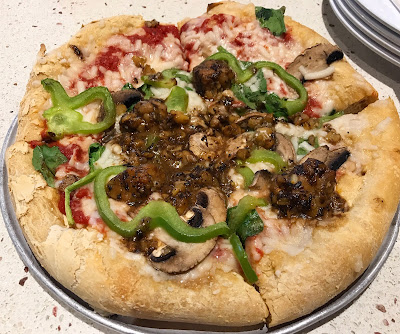 Such a great time! Next up, the Nashville Rock & Roll Marathon (the full!). Training for that starts later this week, but I'm taking a few days off running to recover.
Posted by Bianca at 9:00 PM

Ahhh so much awesomeness in one post, I don't know where to start! How sweet that you and Paul stayed together and crossed the finish line together. I love that so much. It sounds like the weather was awful but you guys did it! Your running adventures are always so inspiring to me, especially after your injuries. Your race day meals look delicious, especially that pizza! Yum!!

Yay!!! It's always awesome to be back running after an injury. Congratulations to you and Paul!

That’s seriously impressive that you were only about 14min slower than your PR!! It’s a **lot** to ask of your body, especially coming back from your injuries. That’s great you guys ran the race together, something about that can really boost morale!
Those fancy bagels are so fun :)) I’m actually a big fan of the cif builder bar, crunchy peanut butter flavor for me, they’re really tasty and perfect for when i have to work late or am traveling. Pizza sounds fabulous although looks like they were shy with the mushrooms ;)
Ttrockwood

Pizza post race sounds amazing! Especially after running in that sort of weather. I am seriously impressed that you persevered through hail!

You are SO bad ass!

So much booze for running so early in the morning. ^__~ Although if someone asked if I wanted to run and drink I would probably consider it a good day. And you need all that drink for the weather you had to endure. Yikes.