Yesterday was Mardi Gras! Although Memphis is about six hours north of New Orleans, we still party pretty hard up here on Fat Tuesday. And besides, I'm all about a holiday! I started my morning off with some gentle yoga and foam rolling since my legs were still sore from the half-marathon on Sunday. And then I skipped my usual smoothie or oats and went right for the white bread carbs with a King Cake Bagel by Dave's Bagels, spread with vegan cream cheese. 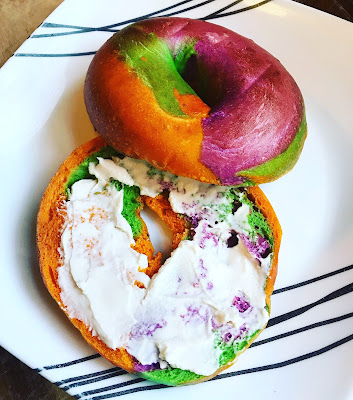 Aren't these adorable? They're not flavored, but the colors are so festive!

Every year, I make a Vegan King Cake to take to work, and this one was no exception. I always use an old recipe by Kittee Berns that I don't believe exists on the internet anymore (sadness). But I have a printed copy that I use. This year, I filled my cake with cooked apples, vegan cream cheese, and cinnamon. 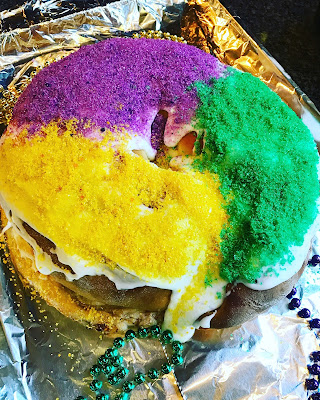 My boss insisted that we do a photo shoot of me cutting the cake by the amazing lights outside the Crosstown Arts bathroom. Believe it or not, our bathroom lights are one of the most photographed backdrops in Memphis (I have no stats to back that up, but I have to walk through photo shoots when I walk to the bathroom at least once a day). The bathroom even has its own Instagram account! 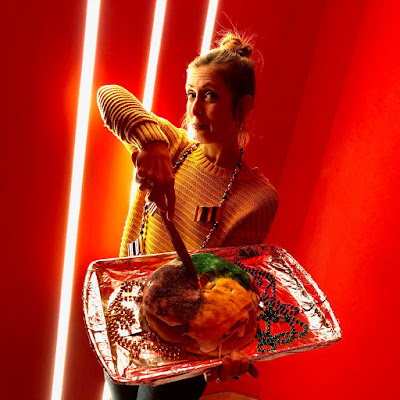 Here's an inside shot! I enjoyed this with a cup of coffee at my desk mid-morning. 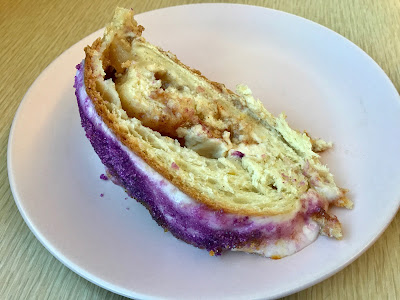 For lunch, I brought Blackened Tofu Scramble Over Kale & Garlicky Grits from The Superfun Time Vegan Holiday Cookbook's Mardi Gras section. I've made this in the past and loved it, so I knew I wanted to make this quick, Cajun-spiced meal again. 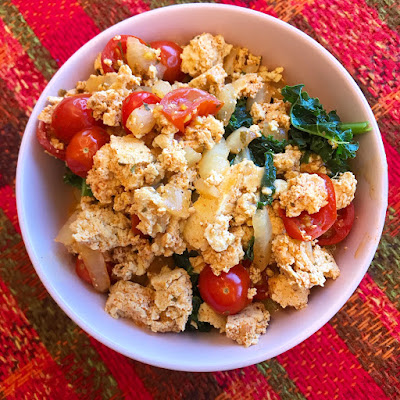 Crosstown Concourse, the building where I work, partnered with the Crosstown Memphis CDC (a board I serve on) to throw a Mardi Gras Celebration in the afternoon. We had music by a second line band and the Kingsbury High drum line. 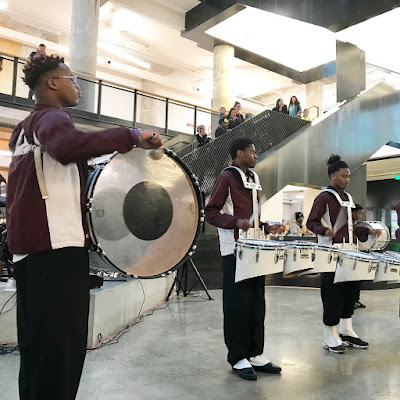 Some local drag queens led the second line parade around the building! 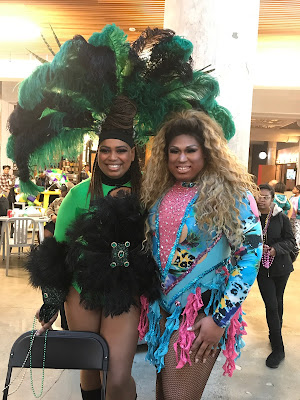 After the party, I headed to Imagine Vegan Cafe to eat their delicious Vegan Chicken & Sausage Gumbo with a side salad (served with vegan honey mustard). I love this creamy, meaty gumbo topped with brown rice, and the salad made me feel better after all that sugar earlier. 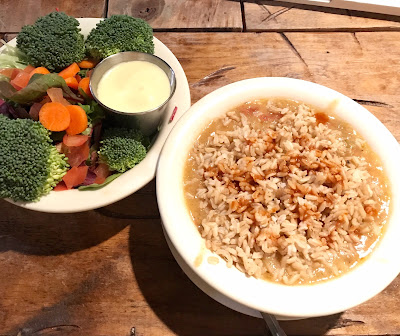 After dinner, I went home and wound down with an Abita Mardi Gras Bock beer (and my cat Polaris, who makes this funny face because he's missing one of his front fangs). 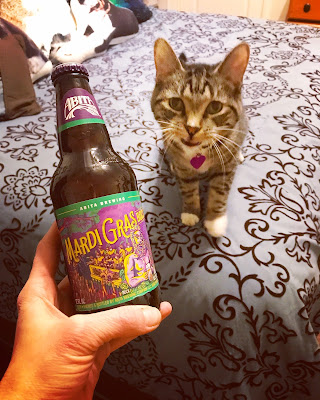 Today begins Lent, which I haven't observed since high school (went I went through a Catholic phase). But I'm a sucker for a detox (and the retox that follows!), so I've decided to give up my favorite food, ramen, until the Lenten season ends on April 18. Nothing against ramen, but I do have a tendency to eat ramen as a late night snack on weekends (typically when Paul makes a bowl at, say, 10 pm on a Saturday and doesn't finish it). This will help me curb that late-night snacking (and I'll have a better appreciation for ramen when it's over!).
Posted by Bianca at 9:00 PM

I wish I could have a piece of your King Cake one day, they always look so good!
And that Mardi Gras bagel is super fun.

I love your holiday posts so much! This looks like such a wonderful and festive Mardis Gras. The bagel looks awesome and your king cake is amazing!! I love that the lights outside of the bathroom has their own IG account and that picture is pretty great. Good luck with the ramen detox, I know it is one of your favorites!

Oh no! I've been wanting to look at Kittee's recipe! I wanted to veganize the recipes in my cookbook (there are 2 or 3 different king cakes, according to time periods) and I was going to see what she did to kind-of use as a guideline. Oh well.