Although I've lived in Memphis for the past 14 years, I spent the first 21 years of my life in a smallish Arkansas town called Jonesboro. It's about an hour northwest of Memphis. I was born there, went to Nettleton high school there, and even stuck around for four more years to get my journalism degree at Arkansas State University. I moved to Memphis at age 21, a few weeks after college, to pursue a journalism career that eventually — just this past year — morphed into a career in communications and PR.

My parents and grandmas still live in Jonesboro, so I go home often to visit. And when I'm there, my parents and I almost always go out to eat or get takeout. When I first went vegan in 2004, finding vegan options in Jonesboro — town of about 70,000 people — wasn't easy. Of course, I can make do anywhere, even if it means just eating fries and a salad. But that's no fun! Thankfully, as Jonesboro has grown in the past few years, so have the vegan options. They even have two health food stores now! That's more than I have in Midtown Memphis, which is home to ZERO health food stores (there are a couple Whole Foods and Sprouts stores out east, but they're a 20-minute drive from my house).

Anyway, I thought it'd be helpful to compile a short list of vegan options in Jonesboro just in case anyone on the internet happens to be searching. I've definitely had Jonesboro transplants, many of whom move there to work at ASU, email me when they first move there to ask where they can eat.

You'll find the most vegan options in one place at the Stem & Spoon Cafe inside the Truck Patch health food store. It's a small lunch counter offering sandwiches, juices, and smoothies. They also have a killer salad bar. 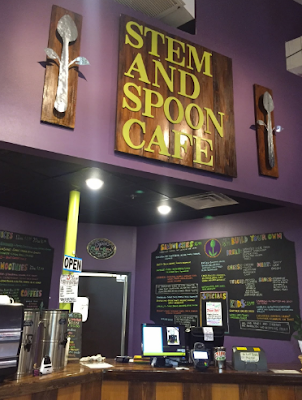 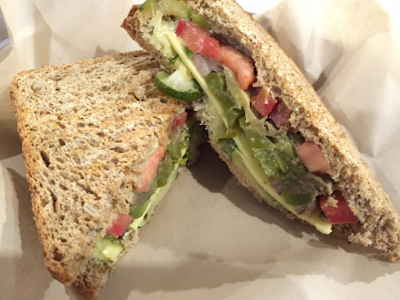 Check out the salad bar! My mom and I often stop in here for massive salads. I've been known to go a little crazy and end up with a $15 salad since it's weighed by the pound, but if you're careful, you can avoid that. 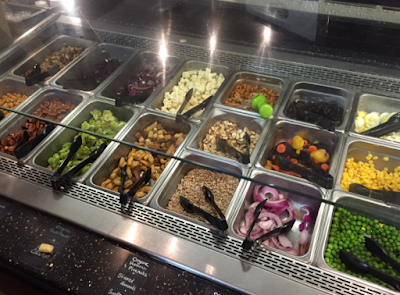 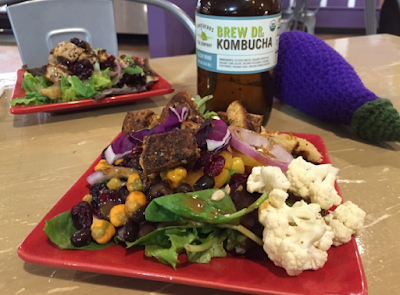 The Truck Patch is also a great place to shop for vegan products, like the Vegan Egg, Tofurky frozen pizzas, Treeline cheeses, vegan cream cheese, and so much more. We like to support them since they're a small regional Arkansas chain.

My personal fave place to eat is Uncle's Maddio's. It's a build-your-own pizza chain that has vegan cheese (Daiya) and tofu as topping options. We eat there a lot, and I always pile on all the toppings (can you see a theme developing here? I can't control myself in a build-your-own environment!). 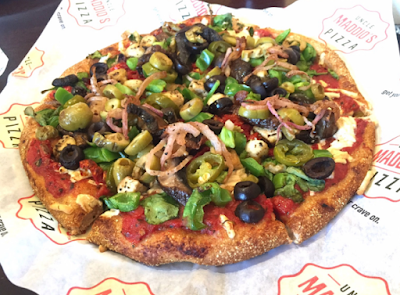 There are a couple Thai places — Sai Thai and Thai Taste. I haven't tried Sai Thai yet, but my best friend Sheridan (who also hails from Jonesboro and visits her family there often) and I recently checked out Thai Taste. Our server immediately understood that we were vegan when we asked for no egg in the summer rolls, and she even wrote VEGAN in big letters on our ticket for the chef. We split an order of the Tofu Summer Rolls with peanut sauce. Very good! 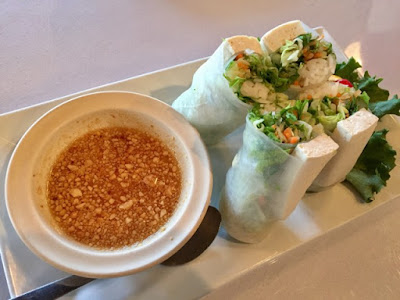 For my entree, I opted for Drunken Noodles with Fried Tofu. These had a nice level of heat, and I loved all the veggies. 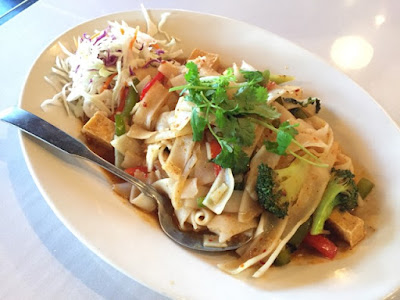 No matter where you are in the country, you can probably always count on finding vegan options at Chinese restaurants. My parents and I are fans of Oriental Express, where I often order the General Tso's Tofu.

UPDATE: A commenter on this post says Oriental Express often uses oyster sauce and chicken broth in some dishes that appear vegan, so be sure to ask. Some restaurants will gladly leave oyster sauce if asked. 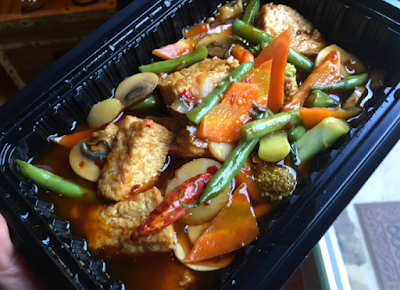 And sometimes, I add an order of Vegetable Tempura. 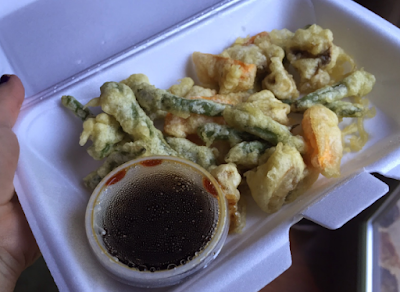 We also hit up Chin Chin Express a lot because my parents love their chicken. Chin Chin doesn't have tofu, but the Vegetable Udon Noodles and crispy Vegetable Spring Rolls are fantastic. 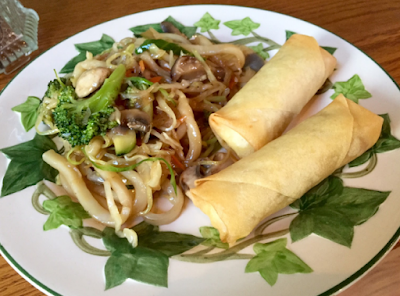 Chin Chin is an Asian fusion place, so they have a mix of Chinese and Japanese food. I typically also order the Avocado Rolls. 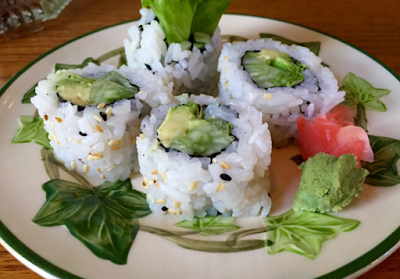 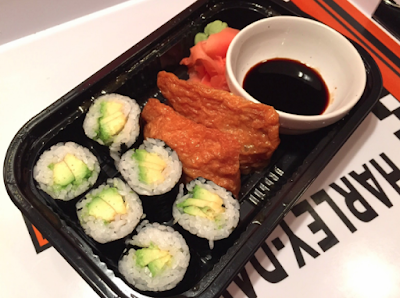 My mom LOVES Mexican food, and we typically go to Pepito's or Kandela Grill. Pepito's has a vegetable burrito that can be made without cheese. I get nervous about the beans in Mexican places, for fear they're cooked in lard. But this burrito is bean-free, just veggies! I don't have any pictures of it, sadly. At Kandela Grill, I always get the Vegetable Fajitas because they include SO MANY veggies in their mix — mushrooms, bell peppers, onions, cauliflower, broccoli, carrots, and more. 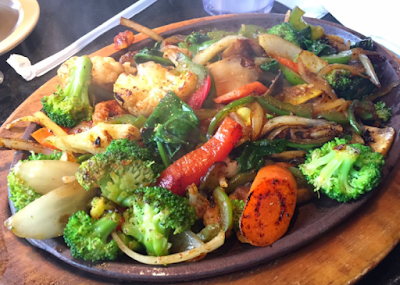 Jonesboro is FILLED with chain restaurants, and you can always find vegan options at the Olive Garden or Taco Bell. They also have a Qdoba Mexican Grill and a Blue Coast Burrito, which both have vegan burrito filling options. My favorite chain, though, is Tropical Smoothie, of which they have two locations. Tropical Smoothie serves Beyond Meat chicken in any of their wraps! Here's the Jamaican Jerk Wrap with Beyond Meat. 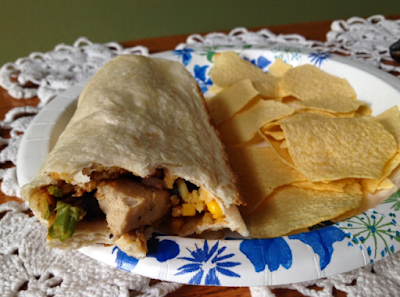 There are a number of other options that I haven't explored, including an Indian place called Tandoori Restaurant. My parents don't like Indian food, so I'll have to try that on my own.

If you read this post and know about other options I didn't mention, please let me know in the comments! I'm always looking to try new vegan things in Jonesboro. Also, I should note that, any time you're eating out at a non-vegan restaurant that has veganizable options, there's always a chance they've snuck in some butter or some other undesirable thing. I don't stress much about that when I'm eating out, so I don't ask many questions. If you're more strict, you may wish to double-check some of the things I mentioned (just don't tell me what you learn because I'm happiest with my "don't ask, don't tell" approach! No vegan police!).
Posted by Bianca at 10:03 PM

I was talking to the lady at the counter of this spanish hole in the wall dive where i love their beans and rice but i was worried how they made it. I was talking to her in spanish and she made a very very good point- they use vegetable oil because it's cheaper. Like a lot cheaper.
So it makes sense that most small independent ethnic restaurants now use veg oil and really are telling the truth that it's not made with animal products
Ttrockwood

I love hearing about more vegan options popping up anywhere, it means demand is up and that's always a good thing!
I'm dangerous in build your own situations too!!

What a great roundup of vegan options! It's so nice to know that you really can find vegan options pretty much everywhere. And not only that, they actually look delicious too! It's nice to know that you don't have to settle for some sad lettuce and tomato salad with no dressing. Everything you posted looks amazing but I'm definitely loving the pizza, Chinese food and Thai food. Yum!!

Thai Taste is great! They make everything to order and can veganize almost everything on the menu by request. Unfortunately, Sai Thai is not vegan friendly. They actually served me noodles in beef broth when I requested a vegan dish and don't seem to understand what vegan means at all.

Uncle Maddio's makes a tasty vegan pizza but make sure to order the whole wheat crust as the white crust has parmesan cheese baked into it.

Though Oriental Express appears to be vegan friendly, it isn't even vegetarian friendly. They use an oyster sauce base in all of their tofu dishes and use chicken byproducts to flavor their vegetable spring rolls. I've found this to be the case at other local Chinese restaurants as well. Animal-based sauces and flavorings are VERY common in Jonesboro restaurants even in dishes that don't traditionally contain them, so be sure to ask when ordering.

I find it hard to eat anything fried when I go out to eat because most places fry their "vegan" offerings in the same oil that they fry animal flesh and organs.

I live right outside of Jonesboro & LOVE Natural Grocers. It's nice not to have to order a lot of things online, & just browse the aisles for vegan options.

I really had no idea that there were so many restaurants with vegan dishes. Your article/blog is so very helpful for this new vegan. I can't wait to try out your suggestions.

Have you tried Tropical Smoothie Cafe? I'm curious to know what they have to offer for vegans.